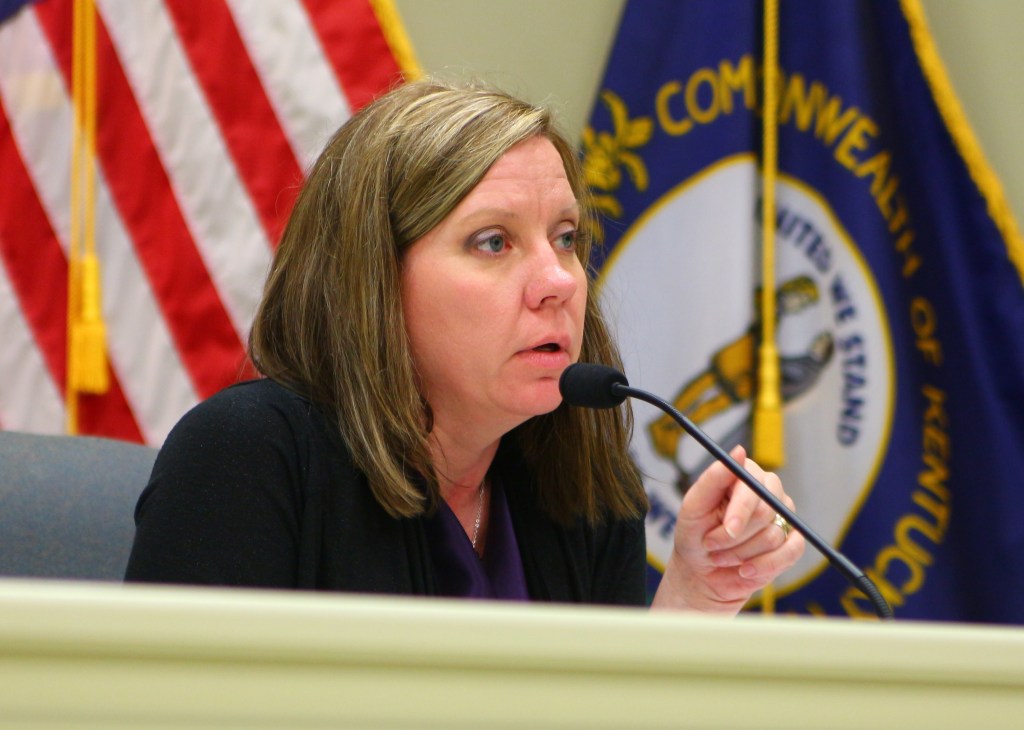 As much as $345,000 in new spending for 911 service is accounted for in Danville’s proposed budget released Thursday. The majority of that — $300,000 — is for funding 100 percent of the costs for adding “emergency medical dispatch,” a service that enables dispatchers to guide callers through basic medical procedures such as CPR. The other $45,000 is to cover what has been characterized by city officials as a proposed cut in 911 funding from the Boyle County Fiscal Court.

Signing of an interlocal agreement with Boyle County “regarding operational and funding issues” will be “key” to obtaining enhanced 911 services, Scott said.

“I believe it’s true that both Danville and Boyle County each … face significant funding challenges,” Scott said. “Notwithstanding that condition, I do have concern presently that Boyle County in its current budget for the next fiscal year may reduce the current level of funding that we are receiving.”

“We have made points in prior years that we believe that’s not fairly funded — if I can use that term — at the present time,” Scott continued. “So a reduction causes concern in the existing level and we believe that it will be reduced $45,000, or may be reduced — at least, that’s the current discussion. And we may not receive any additional funds to step up to provide the enhanced emergency medical dispatch.”

City Commissioner Kevin Caudill said he was not pleased with how much of the funding for 911 service is being placed on the city’s shoulders.

According to city officials, the city runs the area 911 center, but the county receives funding for 911 service from cellular and landline telephones, and it’s holding about $700,000 of those funds in an account designated to be used for 911 services. The county plans to use around $500,000 of those funds to install a new CAD (computer-aided dispatch) system in the coming fiscal year, leaving around $200,000 still being held.

Danville Chief Financial Officer Michele Gosser said Boyle County has regularly contributed $90,000 annually from cellular and landline revenues for 911 service. The county also contributes $137,000 annually from its own coffers and pays for equipment maintenance, she said. The coming fiscal year, the county has initially proposed reducing the $90,000 from cellular and landline revenues to $45,000 in order to “make their account whole,” due to the $500,000 being spent on the CAD system, Gosser said.

“Of our funds that they are holding?” Caudill asked.

“Of our money that they are holding,” Caudill continued. “They’re going to dole it out — I have a serious problem with that. I also think that emergency medical dispatch is a wonderful idea, a life-saving idea. I would like to do it, but I don’t think that we should have to foot the whole bill. If we do, we do, but that’s just not a good policy.”

City officials said with the addition of emergency medical dispatch, next year’s 911 budget would be more than $1 million.

“It sounds like to me if the citizens want emergency dispatch, they need to go talk to the county fiscal court,” Mayor Mike Perros said. “I don’t think it’s equitable at all for us to shoulder the whole thing.”

Commissioner J.H. Atkins noted all the funds being discussed are “earmarked for the 911 center.” 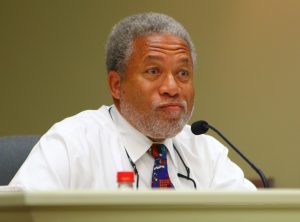 “That’s what everybody needs to hear,” Atkins said. “Regardless of what they think about the proportion, it’s all earmarked for 911 and it’s been sitting there accumulating for how many years now?”

“… These are the same guys that just issued a report card about somebody else, right?” Atkins said, in an apparent reference to comments made recently by Magistrate Phil Sammons, who said he gives an “F” to economic development efforts in the county.

On Friday, Boyle County Treasurer Mary Conley confirmed the county has proposed reducing the annual $90,000 allocation from cellular and landline revenues to $45,000.

That’s because the way the county reads a law that applies to those funds, it believes the funding from cell phones and from landlines are two separate pots of money. And those funds have to be spent based on the percentage of 911 calls each represents, Conley said.

In Boyle County, about 10 to 11 percent of 911 calls come from landlines, while 89 to 90 percent come from cell phones. That means for every $1 spent out of landline funding, the county must spend $9 out of its cellular funding, she said.

Conley said because of the $500,000 CAD upgrade this coming year, providing the $90,000 in regular funding as well would put the county out-of-balance with the ratio and the cellular side would be left with a negative balance.

The Kentucky administrative regulation (KAR) cited by Conley reads in part: “(Cellular) funds may be expended for costs which are solely for the provision of enhanced 911 service involving calls from wireless consumers.” Conley said she was unaware of any law placing a similar requirement on landline funds.

Conley said the county gets its cellular revenues from a state allocation based on a monthly fee charged to every cell phone line and then distributed back out to the counties. It gets its landline funds from a county ordinance that charges 50 cents per month on every landline in the county.

Conley emphasized that work is ongoing on the county’s budget and nothing has been set in stone.

“We’re having discussions on how the funding is going to work,” she said. “… We’e talking about what’s coming in and what’s going out. … It’s not that our budget is final and we cut all your funds, we’re just talking that to balance the E911 budget between cellular and landline for this year, it was easier to cut the amount that was going to dispatch for salaries and take this unpaid portion and allocate it out properly.”

Conley said discussions on how to set up an appropriate 911 agreement between the county and Danville, as well as other cities and even the county fire district, have been going on since as far back as the 2008-09 fiscal year.

“In 2011, we were getting to a point where we were starting to agree on things, and then the city manager that was there left and Ron Scott was interim. And then City Manager Scott wanted to start the conversations, and — no disrespect to anybody — but I had spent two years working with two other city managers, and Ron was just interim, and I said, ‘we need to wait until we have a permanent city manager before I start doing this again,” Conley said. “… Unfortunately, once Ron got installed as the city manager, they were dealing with so many other issues that we kind of fell to the back burner and now we need to be brought back up to the front-burner.”

Conley said there are ongoing discussions now between Danville and Boyle officials about creating an interlocal agreement that would dictate how 911 funding works. The fiscal court will tackle the issue of 911 funding at its next budget workshop on Tuesday, she said.

“We’re trying to responsibly, methodically move through this transition with the need to update the CAD system and the equipment associated with that CAD system,” she said. “We need to address that issue and then there are other issues.”

At Thursday’s city commission meeting, City Manager Scott said it seems to him “the county is receptive more now than at any time in the past five years” to the idea of entering into a interlocal agreement for 911 service.

“I think that’s a great idea,” he said. “Because if you’re operating a city and county service at over $1 million and it’s sort of based on somebody’s understanding that may change from time to time, that’s not the most professional way of funding or operating a system.”

Scott said he believes Judge-Executive Harold McKinney “is willing to make the transfer of funds over to us,” but the county is stuck on the “technical issue” it believes prevents the transfer of the normal $90,000.

“I don’t think he’s unwilling to, but the county — like the city — is faced with (keeping) reserves and keeping money is one way to keep your reserves,” Scott said. “So I don’t know if there’s a second motivation there or not. But I will just say that (McKinney) and (Conley) have been very receptive to meeting and beginning discussions about how we can have an effective interlocal agreement. The money issue is, I think, temporary, more than long-term.”

Scott added he believes the county “can in a way be commended” for saving the $700,000 that can now be used to provide much-needed upgrades.

“That’s over half a million dollars and they’re willing to write that check and that will be done toward the end of this fall or December. And so we’re going to … get usage of that fund that’s been accumulating there for a long time, so I commend them for that,” Scott said.

Commissioners Terry and Atkins laughed during Scott’s comments. Terry said later in the meeting, “Ron’s so much more politically correct than we are.”

Scott said he does believe the state cellular funds should be coming directly to the city, which runs the 911 center under the oversight of the police department as required by law.

Scott noted the city also provides the space for the 911 call center at no cost.

Scott said people from both governments are working to figure out “a fair way of shouldering the respective shares of the total cost.”

“I’m more optimistic than I’ve ever been … that we’ll be able to satisfactorily resolve this issue in the coming months,” Scott said.

Kentucky Writers’ Day Celebration showcases the power of the…