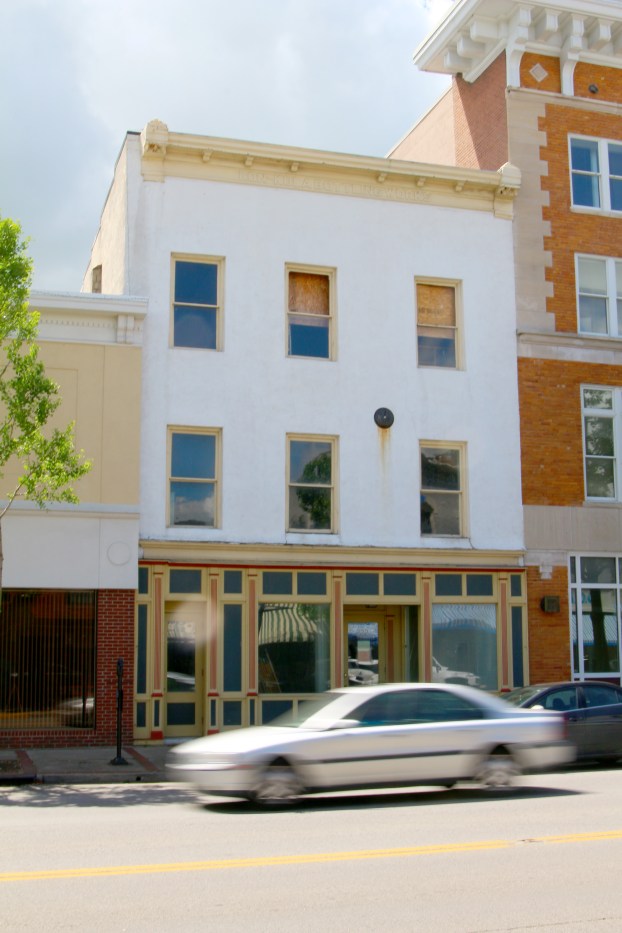 Ben Kleppinger/ben.kleppinger@amnews.com The City of Danville has voted to seek to establish its right to demolish a condemned building at 222 W. Main Street in Danville.

The City of Danville is seeking to establish its right to demolish a historic Main Street building, but the owner says his plans to restore the building are still under way.

Danville City Commission went into executive session to discuss pending or possible litigation last week, before emerging and voting unanimously in favor of a motion from Commissioner Denise Terry concerning the property at 222 W. Main St.

“Due to the continued and unfortunate non-compliance with orders issued by the City of Danville and its Code Enforcement staff for the real property located at 222 West Main St., owned by Tim Montgomery, I move that we authorize the filing of the declaration of rights action in Boyle Circuit Court to confirm the city’s right to demolish the structure,” Terry said.

Commissioner Kevin Caudill seconded. There was no discussion of the motion.

The building has been mired in legal disputes for years. A warning sign posted on the building currently lists a condemnation date of Jan. 1, 2012, but according to news archives it was first condemned in 2010, when a filing in a lawsuit claimed it was at risk of collapse.

The city began accepting bids for demolition of the building in June 2014. At that time, City Manager Ron Scott said “there was apparently no effort made to comply” with a letter sent to the owner — Montgomery — stating the need for structural repairs.

Montgomery filed a lawsuit in the same month against the city, Kentucky Utilities and Whitaker Bank, claiming they had caused a lack of electricity to the building, which was hampering repairs, according to news archives.

“The lawsuit alleges the city contracted KU to install underground power lines without obtaining the proper easements and that Whitaker Bank subsequently cut the lines, leaving the building without electricity,” according to June 26, 2014, article.

In July 2014, a third-party engineer provided the city with a new assessment of the building, finding many internal structural problems but little risk of collapse. As a result, the city gave Montgomery 60 days to begin repairing the building and 120 days more to finish repairs.

In September 2014, an extension was granted to give Montgomery more time to work on the building, according to news archives.

Reached for comment on the city’s newest action, Montgomery said Monday he couldn’t comment in-depth because of the ongoing lawsuit.

Montgomery said there is electricity available in the building now, but issues with an easement for the electric lines have not yet been corrected.

Montgomery said he plans to fix up the building and rent it out, putting apartments in some of the space.

“It’s going to be a wonderful improvement and addition to downtown Danville,” he said.

Montgomery disputed the idea that the building might need to be demolished.

“The building doesn’t need to be torn down. The facade hasn’t moved in more than 50 years,” he said. “The whole thing is just so bizarre.”

The history of the building extends back well over 100 years.

In 1908, the building was purchased by a first-generation Italian immigrant, Antonio Longo, who ran a fruit and vegetable store on the first floor and a Lon-kola bottling facility on the second floor, according to archives of The Advocate-Messenger.

In 1914, the fire that destroyed the Gilcher Hotel threatened the 222 W. Main St. property, but a change in wind direction spared the building, according to newspaper archives.

From 1951 to the mid-1990s, it was a jewelry store — first Lenards Jewelers and Silversmiths for 30 years, then C&H Rauch Jewelers, according to archived news advertisements.

C&H Rauch advertised the space for sale or rent in 1997, after moving its business to Hustonville Road, according to archived classified ads. It soon became the home of Digital on Demand, a Dish Network provider.

In 2000, the building became the brief home for the Boyle County Republican Party. In 2001, Thoroughbred Threads moved in.

Another business, Simply Scrappin, took up residence in the building in 2006.

That building, owned by Ann Yager McCrosky, has been condemned for a number of years as well. The city has not taken action concerning it recently, but the Architectural Heritage Board voted in April to “put the responsibility for that building and where it goes in the lap of the city.”

Like Montgomery, McCrosky says she has plans for her building and wants to restore it.

City commissioners could discuss the 311 W. Main St. property as soon as their next regular meeting at 5:30 p.m. May 8.