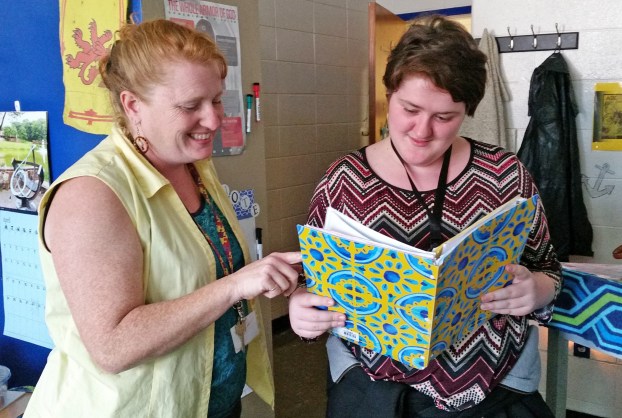 Danville students are looking for work and community partners are responding with open arms, said Employment Specialist Jeri Gerhart, excited and surprised at the opportunities awaiting her students.

Gerhart, who is in her second year at the school, guides the students who qualify for the Community Work Transition Program at Danville High School. The program is a partnership between local schools, the Kentucky Department of Education,  Office of Vocational Rehabilitation and the Human Development Institute at the University of Kentucky. It’s designed to help students in special education begin the processes of gaining employment during the last two years of high school, according to the Community-Based Work Transition Program website, www.hdi.uky.edu/cbwtp.

Currently, Gerhart has eight students, but can have up to 10. One of her students is an “extended student,” and they can remain at the school until the age of 21.

All of the students who come to her, she explained, have some sort of developmental disability — some more severe, some not.

Gerhart’s role includes helping students with job skills, interview processes, hygiene and appearance and how to talk with people, for example.

“I have one guy who can’t stand still. If he has to go to an interview, we coach him, we practice,” she said. “It’s something that highlights kids who might not have another chance.”

Sometimes her job involves showing the students unexpected things — they planted perennials outside of the Danville High School in one of these cases, she said.

“I told them, ‘At some point, you may have an employer who asks you to do something completely out of your realm.’ I’ll tell them, ‘You could be working in a restaurant and they say, “Hey, go sweep the parking lot,”’ Gerhart said, and added her tip given to students was met with funny looks. “It’s foreign to them that someone might ask them to do something weird.”

She was amazed at the community assistance in the project. Gerhart reached out to residents around the community to ask if anyone had bulbs or flowers they could come get to replant — the response was outstanding, she said.

Gerhart is also working to start a school garden with another teacher.

There are student success stories: one of Gerhart’s students works at a daycare. Some volunteer at Goodwill. Volunteer jobs count under the Community Work Transition Program, which she said is a great thing about the program.

“Of course everyone wants a paid job,” she said with a smile. What matters, Gerhart said, is it gives students “a chance.”

One student, Brittany Thomas, has worked at a few different places, volunteered at Grace Café and Goodwill and is waiting on responses to a few of her applications.

“I think (the program) is very helpful,” Thomas said. “It’s a good experience, especially volunteering — if you volunteer, you get more job experience and it’s easier for people to hire you.”

When students, such as Thomas, qualify for the program while in high school, it ensures they will qualify for programs from the Office of Vocational Rehabilitation after graduation, Gerhart said. It saves those students from having to go through the qualification process at that time.

If something happens to a job secured by Thomas or another student, they can go to the OVR to get help finding employment elsewhere, too. And they can guide them, if an opportunity for furthering their education becomes available.

Gerhart said she’s impacted by her own daughter, who has autism, but does not attend Danville High School.

“This is my reality, this is my life,” she said.

Gerhart also has a younger brother who is severely disabled and wasn’t supposed to survive past the age of 10. He just turned 25.

“Working with people with any kind of disability is huge to me. It’s not because they have a disability — it’s because I have a chance to make a difference,” she said.

It’s important for community members to know, Gerhart said, that these students have something to give.

“They do. They’re a student like anyone else is,” she said. “Which one of us does not have a limitation in some area of our lives?”

She’s been amazed at the community response, too. Gerhart’s job includes reaching out to potential employers, setting up student visits and shadowing opportunities, which could lead to a job for students.

“Ridiculous amounts of people have said, ‘Absolutely, bring your students,’” she said.

She said she doesn’t identify the students as having disabilities when talking to employers because it’s the student’s right to say, except in cases where it would be pertinent to the work they are doing.

“Sometimes I have to say something,” she said, referring to a situation with a student who was a special case. “I’m not hiding anything.”

“The community has been so amazing. Some are more welcoming than others,” she said. Most have said yes, some have said maybe, and few have outright said no.

“I have never seen a community come together like this. You just don’t see that,” Gerhart said.

To speak with Jeri Gerhart about working with her students, email her at jeri.gerhart@danville.kyschools.us, or call her at the Danville High School, (859) 238-1308. 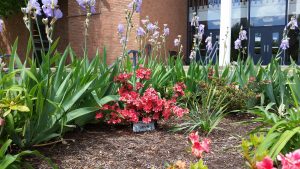 Kendra Peek/kendra.peek@amnews.com
The perennial garden in front of the Danville High School was planted by students in the school who are part of the Community Work Transition Program.