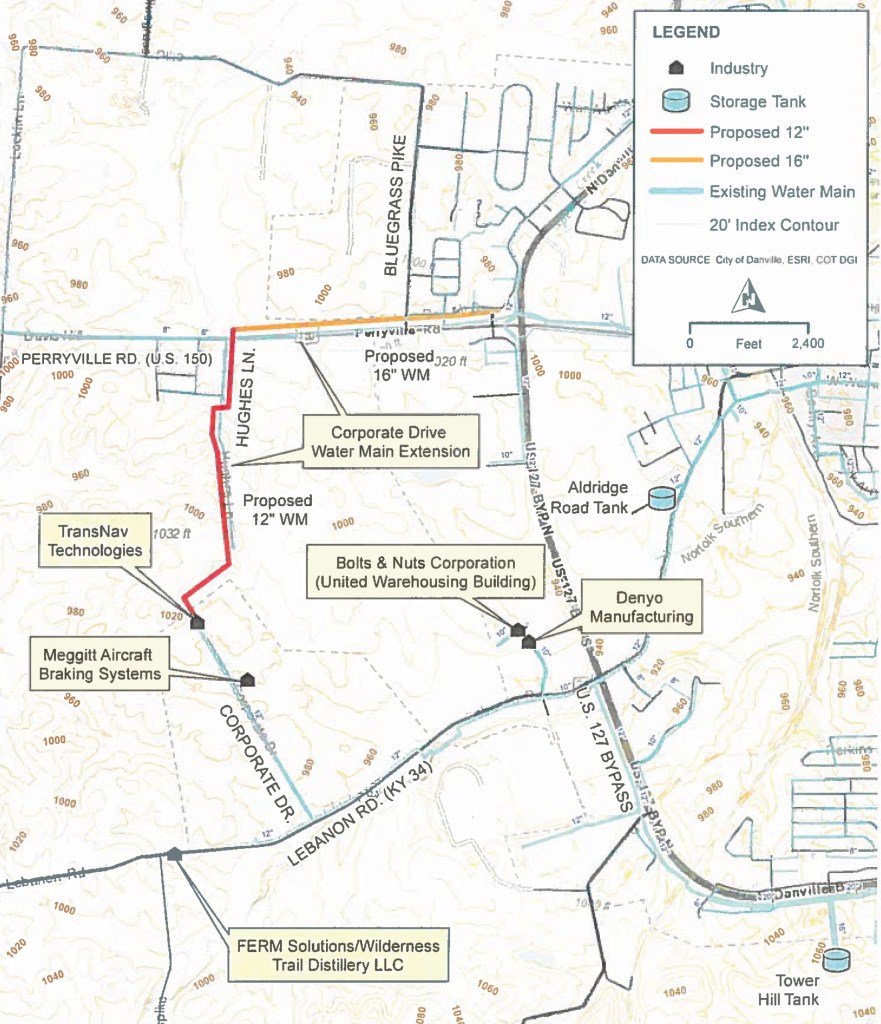 City of Danville A map from a preliminary engineering report shows the planned water upgrade project for the industrial park area in Danville. The upgraded water lines are expected to increase flow for many industrial businesses in the area.

Danville has been awarded a $980,000 grant that will allow it to upgrade water distribution at the local industrial park and improve water flow and pressure to Perryville.

According to Guthrie, the grant “is expected to create over 100 jobs and retain nearly 200, and will also spur further economic investment in the area — a win-win for the city.”

“The project will provide upgraded water supply and improve pressure to the Corporate Drive industrial area of Danville and industries located in the vicinity of (Ky. 34),” according to a project summary provided by City Engineer Earl Coffey. “Improvements consist of 6,900 linear feet of 16-inch line, 7,400 linear feet of 12-inch line, four fire hydrants, valves and other necessary items.”

The project summary states that the industrial area currently “can experience low water pressure due to existing line sizes and growth that has occurred and is still occurring in the area.”

“This lack of excess water supply may curtail growth and expansions in the area. The project will create jobs and private investment that will stimulate the local economy and address issues of distress in Boyle County,” the summary reads.

“Water service to this area is currently provided by a one-way feed from a 12-inch water line along Lebanon Road that dead-ends on Corporate Drive,” according to the engineering report. “The major problem facing the industries is that the existing distribution system is not adequate to provide the required fire flow rates. 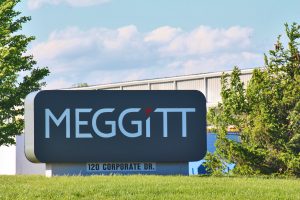 Ben Kleppinger/ben.kleppinger@amnews.com
Meggitt Aircraft Braking is one of the industries expected to benefit from an Economic Development Administration grant to expand water lines to Danville’s industrial park.

“For their two facilities on Corporate Drive, Meggitt has requested 1,500 and 2,500 gallons per minute (GPM) respectively, for a minimum of two hours. Existing fire flows to the area are limited to approximately 1,300 GPM under average demand conditions … hydraulic modeling has indicated that a looped system with larger mains is necessary to provide the needed fire flow.”

The project also helps with “expansion of a larger water main west along Perryville Road that will connect the system to a new elevated storage tank,” according to the report.

Scott said Danville will spend additional funds to make the improvements that will improve water flow and pressure for Perryville residents.

The total cost of the project is estimated at $1.9 million, Scott said.

The project will be funded in part by “remaining” funds from a Rural Development loan taken out to fund the ongoing $23 million renovations to the city’s Coldiron-Watkins Memorial Water Treatment Plant, according to the engineering study.

The project is expected to begin in the fall, Scott said.

“Making these improvements in water line capacity and increased water flow is important to industries currently located in our industrial park,” he said. “It will also enhance our ability to attract future industries to locate here in Danville. This is really great news for our city (and) county.” 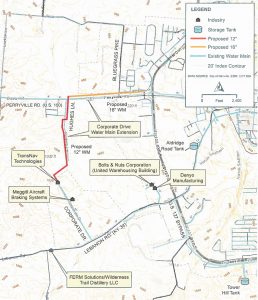 City of Danville
A map from a preliminary engineering report shows the planned water upgrade project for the industrial park area in Danville. The upgraded water lines are expected to increase flow for many industrial businesses in the area.