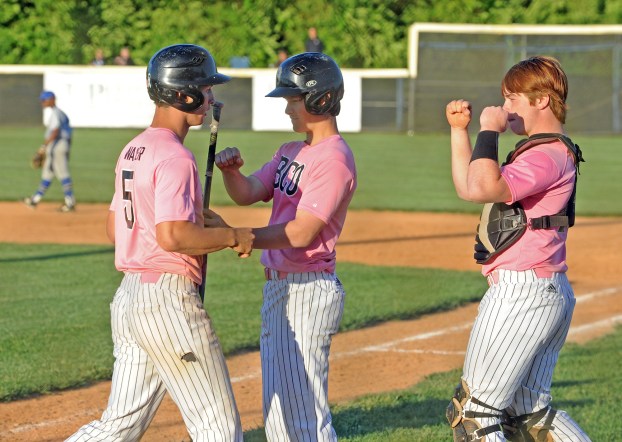 Alone at the top: Rebels beat Danville 11-5 to take control of 45th District

Danville had the momentum, but it didn’t last.

Zach Dampier hit a grand slam in the top of the third inning to put the Admirals ahead, but Boyle County bounced back with six runs in the next two innings, finishing with 10 unanswered runs to win 11-5.

“That’s all on them. I didn’t have to say anything,” he said. “Normally I try to bring them up, but as soon as that inning was over, they brought themselves up. You could see it how they came out that next inning and got back in it. They weren’t going to sit, and that’s all on them. They wanted it, they gathered themselves up and I’m proud of them. That was a heck of a job, we could’ve easily rolled over being down 5-1 and let it expand, but they did a good job taking care of business.”

The Rebels plated three runs in the bottom of the third inning to trail 5-4, with runs scored by No. 9 hitter Cameron Yates, Cameron Walker and Kaden Gervacio.

Danville coach Paul Morse said it was the Admirals errors in the third inning that proved to be costly.

Morse said “communication mishaps” led to the trio reaching base.

“But give credit to Boyle, those guys that hit in the 9-1-2 spots, they found ways to get on base that inning and took advantage,” he said. “Between that and the five errors we had defensively, it’s hard to win a game.”

The momentum swung in Boyle’s favor, and starter Sam Tiller did what he’s done all year: Improve as the game progressed. After giving up the grand slam, he didn’t allow another baserunner.

“Besides that inning, he came in and pitched well,” Wynn said. “Sam always gets stronger and it showed again tonight. Those last three innings, no one was on base. He did a nice job and that’s what you want in a big game.”

On the other side, Danville ace Brian Baxa had to leave in the middle of the fourth inning after an injury to his throwing arm.

Danville led 5-4 when Jacob Crank took over for Baxa, but Morse said the team had trouble pulling the momentum back in their favor.

“That took a lot out of the team when Brian went down,” Morse said. “We still had a lead, then your ace goes down. That takes a lot out of the team and I think that might have changed our whole perspective from that point on. Those last three innings took a lot out of the guys, not knowing if he’s healthy or not. Having him on the mound is a big difference-maker for us. But we think, hopefully, he’ll be OK. It’s in his forearm, it’s not in his elbow, so we’ll have to get him checked out and evaluated. Hopefully it’s nothing major so we can have him back soon.”

Boyle put up three more runs in the fifth inning to take a 7-5 lead, capped by a two-run home run by Ty Dragan. All three runs scored with two outs in the inning.

Momentum continued to roll the Rebels’ way in the sixth. Boyle had one runner on for Dragan, who was intentionally walked before Hunter Mason hit a three-run home run to put the game away.

Both teams knew what was at stake entering the game: The undisputed No. 1 spot in the district in a rivalry match. Morse said his team might have been thinking about that a little too much entering the game.

“For whatever reason, there were a lot of nerves today,” he said. “First place in the district, against Boyle, we had a lot of guys who were nervous, which is kind of uncharacteristic. Don’t know whether that helps you or not, being a little nervous. Sometimes it does, sometimes it does not. But we had some guys miss offensive signs, which we haven’t done in weeks, some silly things that you attribute to maybe we were a little too worked up.”

Wynn said that the No. 1 spot in the district is nice for now, but an away game at Danville is still on the horizon.

“It’s nice to be (in first) just over the halfway point, but we’ve still got two more to go and our goal is to win them all,” he said. “Right now we’re in good shape, it’s a matter of going out and finishing all six of them.”

Measuring success isn’t as easy as it might seem

EDITOR’S NOTE: The Advocate-Messenger approached area high school spring sports coaches about writing a column for publication. This one from... read more