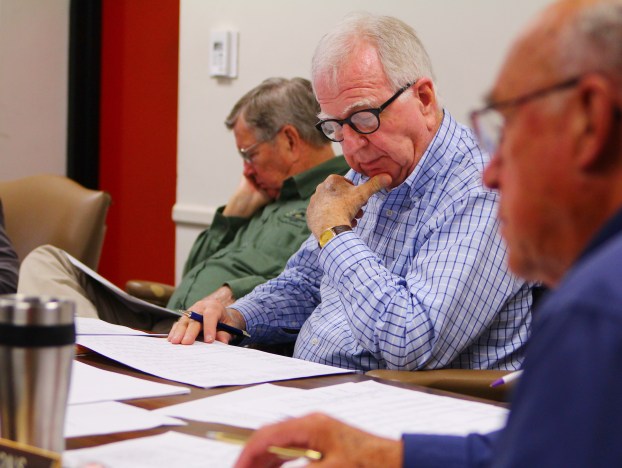 Boyle on board with idea to shift 911 responsibility to Danville

Boyle County magistrates say they’re OK with a plan for the City of Danville to take over all management of the 911 center — meaning revenues currently coming to county would go to the city, as would expenses — as long as an interlocal agreement can be reached by all sides. And they want to be more involved and aware about meetings concerning 911 funding.

“(Danville is) wanting to take over all the 911 funds that come in,” Boyle County Judge-Executive Harold McKinney said Tuesday. “The proposal is that the City of Danville would take all of the 911 money that comes in, they would run the 911 center, and those (agencies and governments) who use the 911 center would make a proportionate payment. That’s the plan.”

“I think that would be a wise move,” Magistrate Jack Hendricks said. “Let them have it.”

Currently, Boyle County receives 911-designated funds from landline and cellular telephones. It then allocates those funds out for the 911 dispatch center, which is run by Danville.

In addition to direct payments to Danville for dispatcher salaries, the county pays for some capital equipment purchases, maintenance costs and other expenses like liability insurance, officials said.

City commissioners have expressed displeasure with how Boyle County holds and decides when to allocate its 911 funds. Currently, the county has about $700,000 of restricted funds available; $500,000 of that is expected to be used to install a new computer-assisted dispatch system this fall.

Magistrate Phil Sammons said he thinks the county could let the city have the funds.

“Why don’t we transfer the funds to them and let them take it over and operate it?” Sammons asked.

“You’re preaching to the choir,” McKinney responded. “I don’t have any problem with that. What I don’t know is given the way we’ve collected it and held it, I’m not sure we can just turn all that money over.”

“I don’t disagree with any of that, Phil, but the transition has to be done in the correct way,” McKinney said. “Because you’ve got to decide if Danville takes it over, and Perryville says ‘we can’t pay,’ who’s going to pay their portion?”

“That would be Danville’s responsibility at that point,” Sammons said.

McKinney and Boyle County Treasurer Mary Conley said the county is working on developing an interlocal agreement with the city that would spell out such an arrangement.

“If we don’t have some kind of agreement, believe me, the way they spend money, it could go up to $1 million that we pay.”

“That was something that we’ve needed to do for years but it’s never been addressed until just this year,” Conley said. “It evolved around the initial meetings that the city manager and the county judge-executive — with the two financial staff (Conley and Danville CFO Michele Gosser) — and we just started talking about it not even a month ago.”

Magistrates expressed displeasure about being left out of the conversation.

“Problem number one is right there,” Magistrate John Caywood said, referring to the lack of discussions since 2011. “I’m sorry, folks — this court has asked for a meeting since probably January, and this court was not involved with whatever discussion y’all had with the city, so none of the people around this table were a part of that opportunity to listen and to hear that.

“… I think if we’re going to do an interlocal agreement, you put in there how often the partners are going to come together and sit down and say what’s right and what’s wrong, and try to improve what’s wrong. 2011 on something that’s this important — I have a real issue with that.”

“I don’t mean this in a harsh way … but why aren’t we kept informed a little better than we are?” he asked.

“We don’t know diddly crap,” Sammons continued. “A lot of stuff goes on and you know about judge (McKinney) and you keep it to yourself and it’s not shared with us.”

“Now wait a minute,” McKinney interjected. “I don’t keep stuff to myself, Phil. We try to keep — I bet you are as informed as any court has ever been informed in this county.”

“That still may be true, but it’s still not good enough,” Sammons said.

Danville has been awarded a $980,000 grant that will allow it to upgrade water distribution at the local industrial park... read more