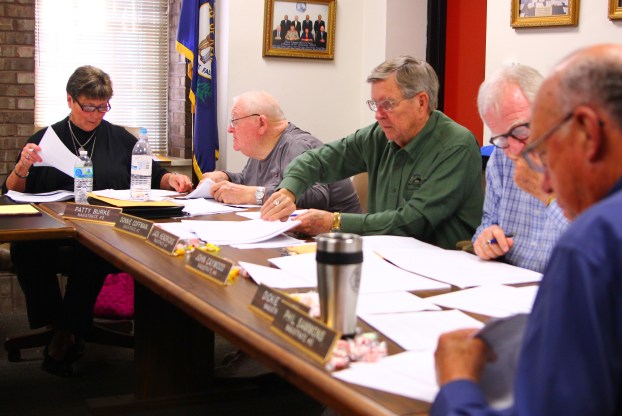 Ben Kleppinger/ben.kleppinger@amnews.com Members of the Boyle County Fiscal Court pour over budget documents Tuesday during a workshop on budgets for the sheriff’s office, EMS, emergency management and the 911 dispatch center.

Boyle County magistrates have voted to put an additional $200,000 in their proposed budget for 911 services and the creation of “emergency medical dispatch” services.

The Boyle Fiscal Court voted unanimously in favor of adding $95,000 for the 911 dispatch center and $105,000 for EMD during a budget workshop on Tuesday. All of the money would come from the county’s general fund.

The votes came during a lengthy discussion of 911 services, during which magistrates voiced displeasure with what they said was a public perception that the county was “behind” on its funding for 911 services.

Magistrate Jack Hendricks said comments about the county’s level of 911 funding made during a Danville City Commission meeting last week led many people to question magistrates as to why the county was behind on its 911 payments.

“What gets reported to the general public, seems like, is not totally accurate,” Hendricks said. “… It’s all because of this last article and the comments that were made by certain individuals about how much we were behind. I want it clear — we are not behind. We paid our fair share.”

At last Thursday’s city commission meeting, multiple commissioners complained about a proposal from the county to reduce payments for salaries from specific 911-designated funding sources from $90,000 to $45,000. Commissioner Kevin Caudill said he had a “serious problem” with what appeared to be a reduction in funding from the county.

Hendricks asked Conley Tuesday if the county was “behind on what we are supposed to pay,” as some members of the public now believe.

“I don’t think that we are,” Conley said.

“I don’t want to say anything bad about Danville,” Judge-Executive Harold McKinney said. “They are running the 911 center and had we been really behind, I think there would have been a movement to sit down and say, ‘your portion is bigger.’ Now that movement is here, but we are caught up to … what we expected to pay this year. We have done that, so we are good.”

• The county receives 911 funding from a local ordinance that charges a monthly 50-cent fee of every landline, and an allocation from state-level monthly charges of 70 cents on cellular phone bills.

• The county believes it is legally required to spend from those funding sources at the same ratio as the number of 911 calls that come in from landlines and cell phones. That ratio is currently around 90 percent cellular calls and 10 percent landline calls.

• Over a number of years, the county has saved up a total of $700,000 between the two funding sources to be spent on 911 improvements.

• The county plans to spend an estimated $500,000 on a new computer-assisted dispatch system for the 911 center this fall.

Magistrates left that plan for 911-designated funds in place, but voted in favor of the increased $200,000 in funding out of the county’s general fund.

Conley said the City of Danville provided a budget summary for the 911 center that shows total expenses of almost $759,000 and a deficiency of about $156,000 “unfunded” from the “county portion.” But that leftover portion does not adequately allocate costs of 911 service to Perryville, Junction City or the Boyle County Fire Protection District, she said.

Conley said Boyle County Fiscal Court is estimated to be responsible for providing 911 service to about 32 percent of the county’s population. In order for the fiscal court to pay 32 percent of the dispatch center’s budget, it would need to increase its current general fund payment of about $137,000 to $232,000 — an increase of $95,000, she said.

Conley said she used the same 32-percent figure to calculate what Boyle County should contribute for emergency medical dispatch, a service that allows dispatchers to guide callers through steps such as CPR before first responders can arrive on the scene.

Conley said while Danville budgeted an estimated $300,000 for implementing EMD, she has heard the cost could be as high as $400,000 after accounting for training.

“There’s an increased cost to doing business in the sheriff’s office in the county, if you approve the expenditures that are listed here,” Conley said.

The “cost of doing business” has similarly risen for EMS, Conley said.

Preliminary budget documents show the biggest increases are for new equipment, mainly due to the need to purchase a new ambulance (about $117,000 more than budgeted this year); retirement costs (about $20,000 more); and health insurance (about $133,000 more).

Reduced expenses in other areas offset some increases in all of the budgets.

“Mary, why would you keep reminding us of that same thing?” Sammons asked.

Boyle on board with idea to shift 911 responsibility to Danville

Boyle County magistrates say they’re OK with a plan for the City of Danville to take over all management of... read more