Strike Out Cancer: Boyle, Danville honor those affected by cancer 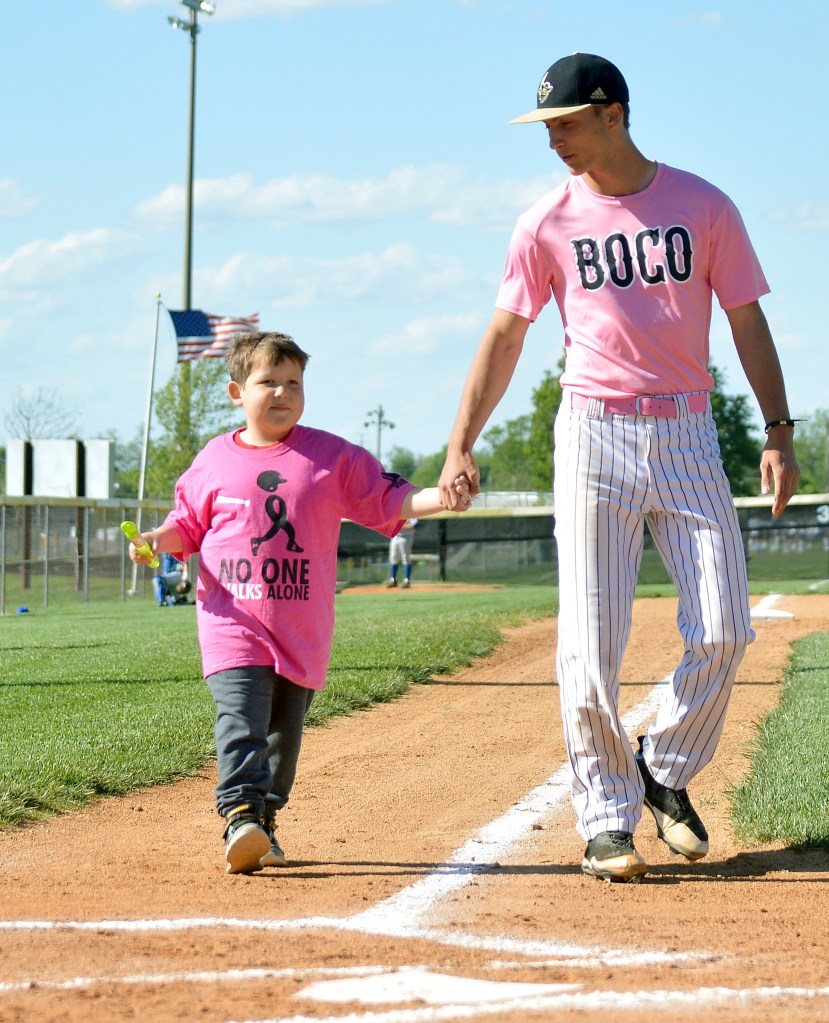 Jeremy Schneider/jeremy.schneider@amnews.com Bradlee Aguilar-Moreno, left, and Boyle County senior Cameron Walker head towards home plate during Tuesday's Strike Out Cancer event. Bradlee was diagnosed with brain cancer on August 12, 2011. He has received treatments at St. Jude’s Children Hospital in Tennessee. He has been in remission since September 2016.

Before last year, Kyle Wynn admits he was a little naive. He thought cancer was something which wouldn’t affect him or his family, something that happened to other people.

Unfortunately for the Wynn family, his grandmother passed away early last year from cancer. And since then, it’s given the Strike Out Cancer games the baseball team holds even more special and personal for him.

“She had some in the past, fought it and won, but then I got a call … and they said it won’t be too long, and sure enough, it was two weeks and she was gone,” the Boyle County baseball coach said. “For me personally, you get caught up in that and then forget about it, and now when you have some in your immediate family, you don’t forget about it.” 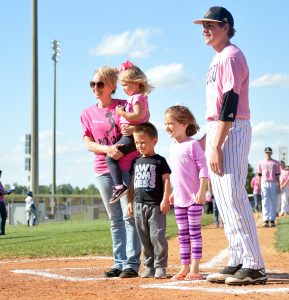 The Rebels held their annual recognition of individuals and families affected by cancer before Tuesday’s game against Danville. Twenty-one individuals were honored before the start of the game; they were paired up with a current Boyle player and walked from third base to home plate, in line with the year’s theme of “No One Walks Alone.”

For Rebels senior pitcher Sam Tiller, the cause hits close to home — his grandmother and two aunts have battled cancer, and he lost a cousin earlier this year to the disease.

“Every year, it’s circled on the calendar because you’re playing Danville at home, but it’s the cancer game for a lot of guys because it affects so many people you know,” Tiller said. “It’s something that gets every person, every family, so I think everyone gets what’s happening today.”

Wynn said those personal experience make the event special, but it also affects those who are like he was.

“I think the worst part and the best part for them is we’ve had so many affected within our team,” Wynn said. “We’ve lost parents, we’ve lost grandparents. They see their classmates now, if they come out and take part in our ceremony, they didn’t know about them. I think it’s something where as a kid you don’t realize it as much but as an adult you do. With an event like this and seeing it up close to our baseball family, it does sit in to them. That’s what it’s all about.”

Proceeds from t-shirt, car decal and wristband sales, along with a portion of concession sales, went to benefit Heritage Hospice, which “provides compassionate care for patients and families during the journey through life-limiting illness.”

According to Katie Tiller, who organized the event, t-shirts and car decals are still on sale and can be purchased by contacting Boyle County High School. 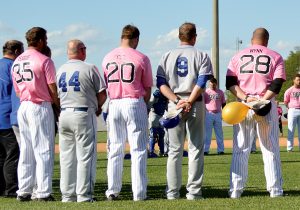 Jeremy Schneider/jeremy.schneider@amnews.com
Boyle County and Danville baseball teams joined each other on the field before the start of Tuesday’s game as part of the Strike Out Cancer benefit.

The game against the rival Admirals, who joined the Rebels on the field before the game for a moment of silence and a balloon release, doesn’t need much else to make it more important. But for Sam Tiller, having the opponent coincide with the event makes the night much more special.

“I don’t know if you go out and play extra hard or anything, but you know what you’re playing for,” he said. “It puts things in perspective and you feel lucky to be out here playing. You really appreciate things this day.”

Tiller walked the bases with Sherry Bodner, who lost her husband, Scott, last year. Pairing the players with survivors or family members really hits home for the teenagers.

“Resilient is how I would describe these people,” Tiller said. “They make you want to go out here and fight. It’s one of those things unless you’ve been through it, you don’t really know, but it really makes you appreciate them and what you’re doing.”

Measuring success isn’t as easy as it might seem