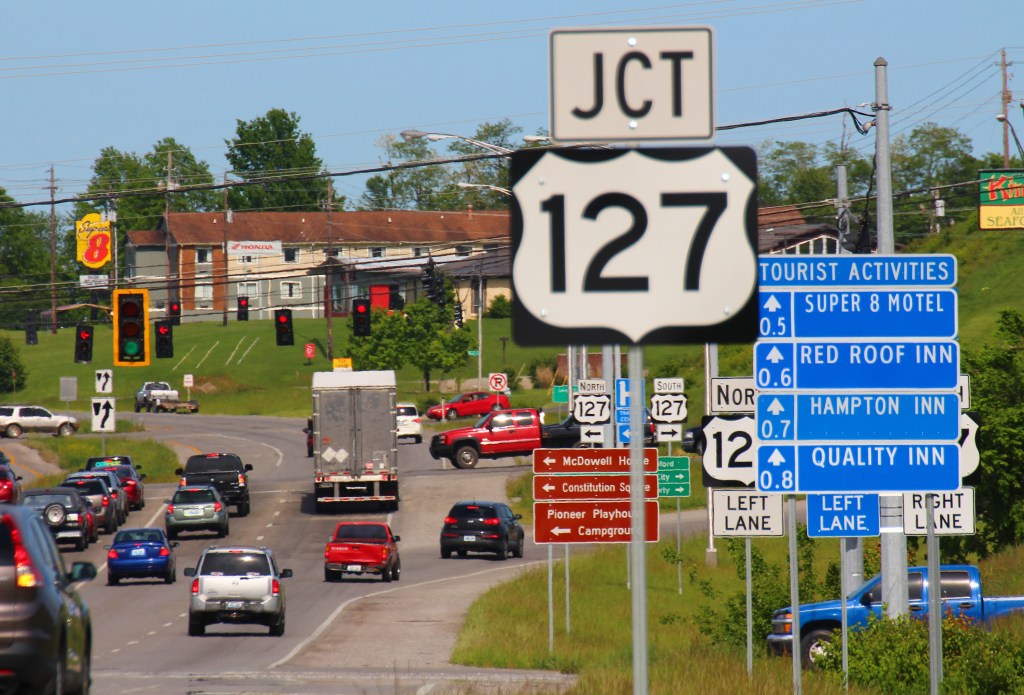 Ben Kleppinger/ben.kleppinger@amnews.com Numerous signs are seen lining the side of the south Danville bypass near Hustonville Road Wednesday afternoon. A $27,000 wayfinding study is planned to develop a master plan for reducing signage clutter and improving clarity for drivers and pedestrians around the entire city.

Danville has agreed to pay $27,000 to develop a plan to overhaul signage around the city, in attempt to make signs clearer and easier to follow.

The City Commission voted to give a wayfinding contract to the architectural and engineering company Carman at its meeting last week.

City Engineer Earl Coffey said the Kentucky Transportation Cabinet has told the city it may have too many signs up along its roadways right now.

“What the (KTC) is suggesting is that we can do a better job with all our wayfinding signs — that we have an unusually high number of them,” Coffey said. “They are suggesting that doing a true comprehensive plan for our wayfinding will actually reduce sign clutter but actually provide better direction.”

Coffey said there’s not “a fixed number” of signs that the state thinks Danville ought to have, “but they think we can do a better job.”

Besides any issues with current signage, Coffey said there are requests from the Arts District for signs; the Industrial Foundation is developing wayfinding signage plans for truck traffic; and there are efforts to improve safety in downtown Danville.

“The logical entity to coordinate that effort would be the city, which is why the city is doing this and coordinating an effort with consultants to aid in that process,” Coffey said.

In its proposal to the city, Carman touts the fact its senior principal, John Carman, is a Danville native.

“We understand the culture of the community, the physical parameters and the systematic way that residents and visitors alike move through the community,” John Carman wrote in the proposal.

Carman is also currently working on a wayfinding master plan for Corbin and has recently completed a similar plan for Frankfort.

“Each of these communities are similar in size and culture to Danville and are great ‘springboards’ for understanding wayfinding in the context of Kentucky communities,” John Carman wrote.

The proposal states that Carman “will fully engage the community and insure that all interests are understood.”

“It will be critical to ‘listen’ to the various interest groups and ‘respond’ in a manner that addresses all concerns,” the proposal reads. “Carman will initiate the project with the City of Danville by helping to identify a core group of persons that will be vital to representing the constituencies of the community … it is recommended the Wayfinding Committee consist of seven to 10 persons that are representative of the diversity in the community.”

Carman’s plan calls for a project kick-off meeting; a community workshop to “obtain planning input;” an audit and analysis of current signage; an analysis of traffic volumes and key intersections; and development of a framework for where signage should placed and for what locations.

The final result of the $27,000 project will be a wayfinding “master plan.”

“Ultimately, we will do a plan and that will be a document that we will submit to … the engineering department in the Lexington (KTC) office,” Coffey said. “They will approve and hopefully they will participate in the installation of some of the signage.”

Danville Commissioner Kevin Caudill said he has heard from a business owner who is concerned the wayfinding project could cause them to lose a sign for the business that is already up.

“We can’t say they will, we can’t say they won’t — it’s not something we’ve even contemplated at this point,” Coffey said. “We agree with some of the observations made by the Transportation Cabinet in that we do have a lot of unique signs that don’t look the same, that can contribute to confusion.

“It may be as simple as consolidating those onto one structure with a single color. We don’t know. To suggest anything of what would be (on a) sign is a little bit premature. I think you go through the correct wayfinding process to identify stakeholders, to identify key interest areas, and then you develop your signage really last.”

Coffey said there is a plan to incorporate the logos and designs from the Convention and Visitors Bureau’s rebranding project, which is  nearing completion. That rebranding project has led to the CVB changing Danville’s slogan from “It’s Better Here” to “Historically Bold,” and updating the logos for area agencies and governments.

“We don’t want to reinvent the wheel as far as that goes,” Coffey said. “We think some of those efforts have been good. … It should be a community effort to accomplish as many goals and objectives as you can.”

P&Z willing to open on Fridays if city, county…