‘Too Much Light Makes the Baby Go Blind’ to offer eye-opening drama experience for audience, actors at DHS

Teacher and director Steve Meadows wanted a way to include anyone who wants to be a part of the spring play at Danville High School. “Too Much Light Makes the Baby Go Blind” fit the bill, offering a collection of vignettes where multiple students will either return to the stage, or try their hand out at acting for the first time.

“We did cast everyone and have kids who are in their very first public performance of any kind in the show plus most of our regular suspects,” says Meadows.

Described as a unique performance that originated in the Chicago improv scene, 16 students will perform 30 plays in random order — that order to be decided by the audience on nights of the show, who will yell out numbers of the plays strung along a clothesline above the stage. Each number contains a play title, which is changed after each performance, and they quickly perform the vignettes before running to hit the next one the audience yells out.

The collection is described as Neo-Futurism. “It has to do with the idea of the reality of life extending onto the stage, that good drama can be made out of a moment. Our plays are all complete works with a beginning, middle and end, and reflect normal life, thoughts, or even occasionally daydreams about classic stories — like our 90-second ‘Macbeth.’ This type of drama will appeal to everyone.”

Meadows says this specific piece was chosen because “It’s a way to explore and encourage young actors that few other plays offer. We do a musical every other spring, so in the non-musical years, we try to do something ‘classic’ or new to our audience.  This is a new show for our audience — and a lot of fun.”

The audience will have a list of plays in the program so they can see the titles, but they won’t know which play is inside each number — “… the actors don’t either,” Meadows says. “So it’s exciting for everyone to see what each number reveals after the audience chooses one. Thus, the show will be a different show — or at least in a different order —  every time.”

He says this type of stage production requires energy and concentration, even more so than usual, as they much quickly shift gears from audience interaction to the mood and tone of each play in just a few seconds.

“We hope the audience will think about their lives and be able to say that they enjoyed their time with us. “

“Too Much Light Makes the Baby Go Blind” opens 7:30 p.m. tonight and goes through Saturday, May 6 in Gravely Hall Performing Arts Center at Danville High School, 203 E. Lexington Ave. Tickets will be available at the door for $6, or $4 for students and senior-citizens. 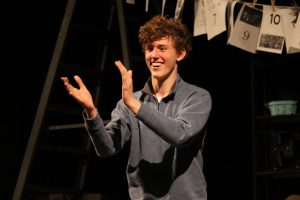