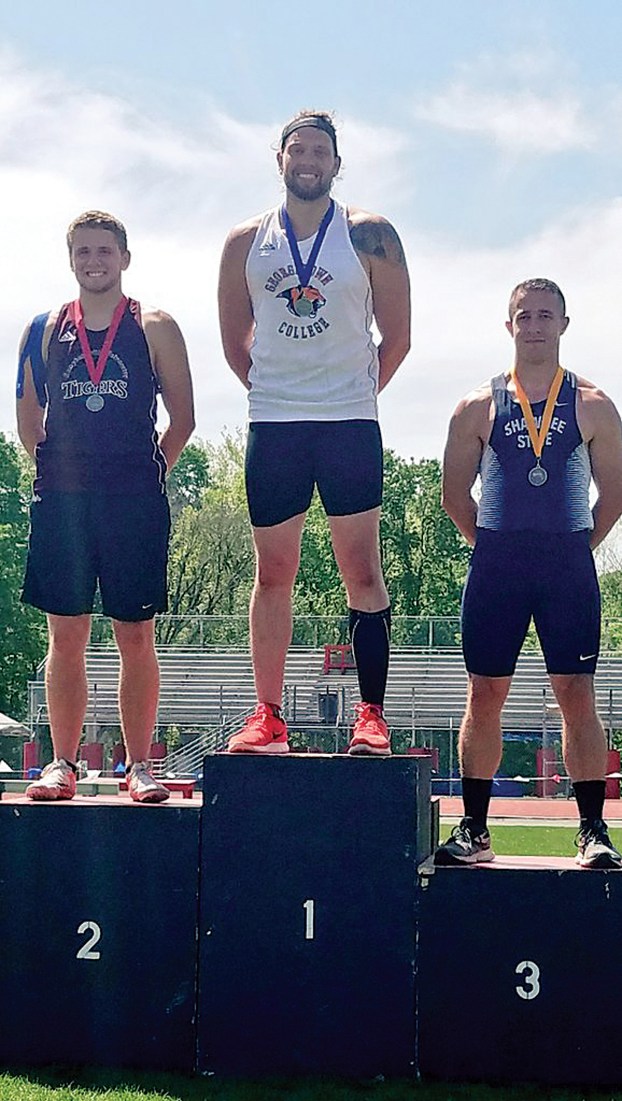 After taking a couple of years off to work after graduating from Boyle County in 2012, Cody Cooper decided he was ready to get into college and compete in track and field.

When he found St. Catharine College, he found a place he could be comfortable. But two years after he arrived in Springfield, the college closed its doors due to financial issues.

So Cooper was on the search again. This time, he landed at Georgetown College, and he’s already making his mark with the Tigers, breaking the school’s decathlon record last weekend at the Mid-South Conference Championships in Williamsburg.

Cooper, who ran track for the Rebels, started as a decathlete at St. Catherine.

“It wasn’t until recently that I got really good at any one or two events,” he said. “I’ve gotten better at the throwing events, but I discovered that I wasn’t great at anything but I was good at everything. I’m not too incredibly slow, I can get over hurdles, I can jump well and throw well, so let’s just give it a go.”

Cooper won the MSC decathlon title with 5,110 points, which followed up a pair third-place finishes in his two years at St. Catherine.

“The surprise came on day one when I tied shot put record,” he said of his throw of 12.11 meters. “I’m a decathlete, I identity as decathlete more than thrower, so that was a surprise to me.

“Obviously I’m thankful and happy to have that (decathlon) record, but that was a subgoal. The goal was to win.”

The goal hasn’t changed for Cooper, but the team did. He said leaving St. Catherine and searching for a new school was “one of the most difficult transitions I ever had to make.”

“St. Catherine was a really, really strong community,” he said. “It was a really great atmosphere. I never felt so at home with a group of individuals, from my professors to my track team. It was one community.

In the end, controlling his own athletic career was what drew him to Georgetown. While other schools wanted him to compete in individual events, the Tigers were happy to let him continue in the decathlon.

“It boiled down to best academic position I could be in, what is best school that will give me an athletic scholarship,” Cooper said. “The other part was the track coach at Georgetown. He’s a really cool guy, in a lot of ways similar to my last coach at St. Catherine.”

Cooper missed a chance at qualifying for nationals after the criteria were changed this year. He said his score would have given him a spot in any of his last two years.

Instead, Cooper will try to qualify in the javelin at this weekend’s NCAA East Preliminary Championships at UK. He admits he stands a long shot of qualifying in the event, but said he jumped at the chance to compete at a Division I meet.

Javelin is one of the ten events athletes compete in during the decathlon, along with shot put, discus, long jump, pole vault, high jump, 110-meter hurdles, and runs in the 1500, 400 and 100. It’s a grueling process, and Cooper admitted it’s taken him a few days to recover from his weekend at the MSC meet.

“I’m 6-foot-5, 230 pounds, and first time picking up a pole to vault was terrifying. I’ve gotten to enjoy it and I’m pretty good at it. If I wasn’t a decathlete, I would have never picked up a pole. I enjoy pushing myself all around as athlete.”

Going into the last event of the decathlon at the MSC meet, Cooper figured he needed to finish the 1500 in under 5 minutes, 25 seconds to keep his lead. He just missed that time, running in 5:28.65, but his calculations were a bit off and his time still provided enough cushion to win the title.

“When I crossed the line, I went straight black,” he said of the 1500 run. “I woke up to someone pouring water on my face. … You know you’re going to be fine, but that’s the only option, you’ve got to run as hard as you can, empty the tank completely. You have to know when you cross the finish line, I have nothing left in me. That’s the kind of athlete I am and always try to be. Train as hard as you can and always be prepared.”

Cooper can barely walk this week, has tennis elbow from throwing the javelin and is pretty sure he has a stress fracture in his shin. But he knows there’s still more in his tank to give.

“I’m 23 now, I’m an old junior” Cooper said. “I’ll be an old senior, but my decathlon age is probably 33. Decathlon has made my body age faster than it would have otherwise. My motivation really just comes from that want to win. When I started doing the decathlon, I knew it was something I had potential to be good at, but I feel like I still have something to prove to myself.

“I’m going to give it everything I have. I have one year left, then I’m done forever. … I’m going to miss the sport. I guess my motivation is I want to leave some kind of legacy for myself, for my kids someday to say, ‘Hey there’s dad’s old track picture, he still has the record at Georgetown.’”

Region tournament shaping up for exciting — and wet — weekend

Weather might hamper the matches this weekend, but 30 tennis teams are set to square off around Danville this weekend.... read more