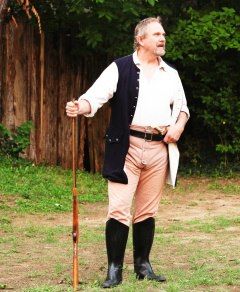 HARRODSBURG — “James Harrod: The Battle for Kentucky” is more than just a summer play; it’s the story of Harrodsburg’s founding and history coming to life. Ragged Edge Community Theatre invites you to be a part the play’s sixth season of this exciting show, which goes up under the stars at the historic James Harrod Amphitheatre at Old Fort Harrod State Park.

Roles are available for all ages — both speaking and nonspeaking parts. However, due to a large cast and safety concerns, it is asked that any children under the age of 12 have a responsible adult willing to participate in the production alongside of them.

With lots of live fire and stage combat, several athletic males and females are in need to fill roles for the Shawnee Nation.

No prepared audition is necessary; the script from the show will be used for cold readings.

The production is directed by Allan Barlow, managing director of Ragged Edge and playwright for “James Harrod.” Barlow, a veteran actor and teacher of 35 years, has also performed the title role for the last five seasons. he began his professional theatre career in Harrodsburg playing the title role in “The Legend of Daniel Boone.”

Auditions for “James Harrod: The Battle for Kentucky” will be 10 a.m. Saturday, May 6 and 6 p.m. Monday, May 8 at Ragged Edge Community Theatre, 111 S. Main St., Harrodsburg. For anyone unable to make either audition who is interested in being a part of the show, call the theatre at (859) 734-2389 or email raggededgetheatre@gmail.com to arrange a time to speak with Allan Barlow, the show’s director.