Region tournament shaping up for exciting — and wet — weekend 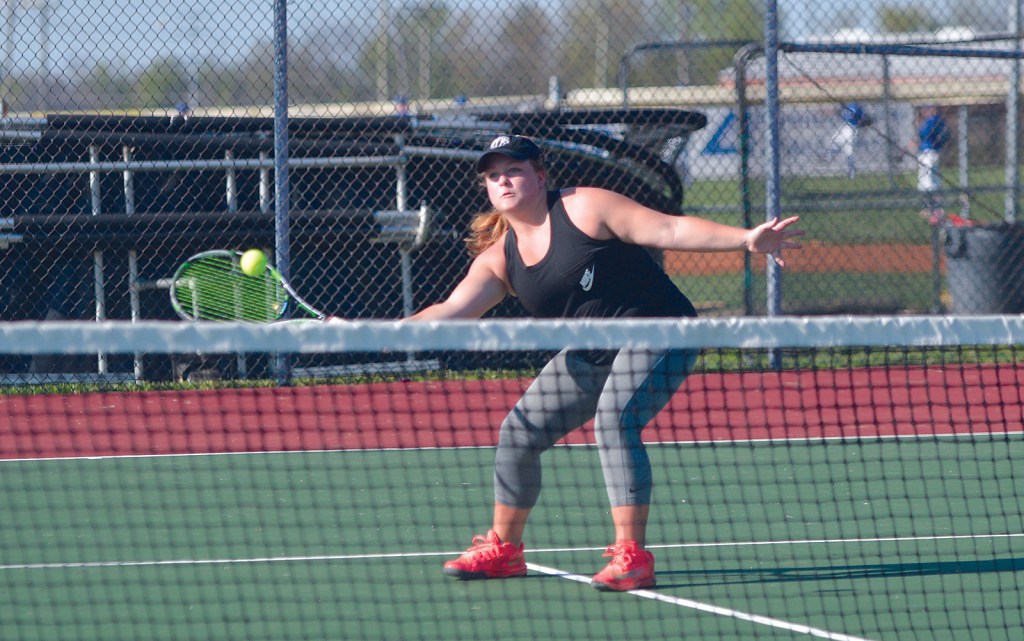 Jeremy Schneider/jeremy.schneider@amnews.com Anna Duncan of Boyle County enters this weekend's region tournament as the No. 2 seed in singles play.

Weather might hamper the matches this weekend, but 30 tennis teams are set to square off around Danville this weekend.

Centre College, Danville and Boyle County will host the region tennis meet this weekend, where 179 athletes will battle it out for the region titles.

Boyle coach Tao Costello is running point on the event and said he’s hopeful that they’ll get matches in this weekend. The Rebels have a great chance at placing athletes in the state tournament for the sixth-straight year.

Boyle girls have a chance to repeat as the region team champions, headlined by three seniors. Anna Duncan is the No. 2 seed entering singles play and Kate Leahey/Laura Nolan are the No. 4 doubles seed.

“I’m expecting Anna Duncan to go pretty far,” Costello said. “She’s got some tough competition. If she makes it to the quarterfinals, Elizabeth Joiner from Danville could meet up with her, then Amber Pierce potentially if there’s no upsets. If she makes it to the finals, she’ll meet Casey Kibler from East, the only one that was able to beat her this year. That was a tiebreaker in the second set.”

Joiner is the top seed for the Admirals, and coach Ryan Adams said she’ll look to continue her strong run in the region tournament.

“Elizabeth Joiner has had a really good year playing singles for us,” he said. “She works extremely hard at improving her game and is one of the premier players in the region. We were really happy with her getting a No. 5 seed going into the tournament but that doesn’t mean she’ll have an easy draw. She plays a really good player in Emma Kate Crouse from West Jessamine first round and will have to bring her A game if she wants to advance. It’s a really competitive region for girl’s singles this year but I know that if she plays her best, she’s tough to beat.”

Danville’s top girls’ doubles duo faces the No. 6 seed, but Adams said they also have a chance to make noise in the tournament.

“Grace Crawford and Eleanor Grubbs have been great this year stepping up playing No. 1 doubles this year,” he said. “They’ve stepped into a big role since this is only their second year playing.  They drew a good doubles team out of Berea who are seeded No. 6, but I think they could really make a good run if they could get past them. They play so well together and have continued to improve all season.”

AP testing has been a factor for both teams this week. Adams said his team has done a great job juggling school and region preparation.

“I couldn’t be more proud of my players in the classroom,” Adams said. “They are all extremely focused on their classes and it often takes precedence over tennis, to the point where some have missed matches in order to prepare for college classes, End of Course Assessments, ACT, and AP tests. It’s been a little frustrating at times as a coach trying to manage the matches with players out, but I know that they’re doing the best thing for them when they make those decisions and I respect them for that. I know the opposite could be even more frustrating with trying to get players eligible and encouraging them to focus more on their education, so I will gladly take this kind of frustration.

“Our only senior that is graduating, Katie Stamm, is beginning college next year with 27 college credits.  She is just one of the many of my players who are incredibly focused on their education.  I have so much respect for them in the classroom and wish I was half the student in high school that they are.

It has been a special year for the Boyle girls, who went undefeated as a team, and Costello, who earned his 100th win this season. Region in the backyard is special as well.

On the boys side, the Rebels are led by Luke Duncan, who earned the No. 5 seed in the region. Freshman teammate Chase Frisby will face Danville’s Konnor Hill in the first round, a match that Costello is excited for.

“An interesting hometown matchup is Chase Frisby with Konnor Hill, the senior vs. the freshman,” the coach said. “The first round, I think that match excites me the most. I really want to see what happens there. Both kids are great and unfortunately someone has to lose. I expect that one to be a good match.”

Doubles’ team Adrien Van Steenlandt/Josh Bishop are the No. 4 seed and earned a bye in the first round. If they make it past West Jessamine in the second round, they could face 5-seed Garrard County duo Cameron Carver/Stevie Morgeson with a trip to state on the line.

“They’re going to have a tough matchup with the Garrard team, Garrard always has a good doubles team,” Costello said. “That’s not going to be easy for them but I think they can do it.”

Costello said he has prepared his team for the tournament with some great competition within the squad.

Both coaches said this year’s region meet in Danville will be a great chance for the community to show its support for tennis.

“I’m excited that we’re having this in Danville,” he said. “This is kind of a test run, we’re going to see how it goes and if it works out well, maybe we can start having the region in Danville. We definitely have a lot of courts.

“You’re going to have 16 girl teams, 14 boys teams, 30 teams, 179 players, and all of the coaches and parents and fans coming into Danville. They’ll be eating, we want to invite the food trucks out, I’m sure some people might stay in hotels, buy gas, see the Centre campus and everything that Danville has to offer. I think that’s exciting as well. We’re bringing tennis to Danville and we’re excited with what we’ve got going on.”

“We are really excited to be the host area for regionals this year,” Adams said. “Berea College has been a great place in years past but we’re anxious to get the opportunity to show off the great tennis facilities we have right here. There is so much interest right now in Danville and I think it is due to what Coach Tao is doing at Boyle, having Tim Colleran at Danville Country Club, and what we’re doing at DHS. I couldn’t have been happier when  Danville Schools decided to invest in our student athletes and completely renovate our tennis facility behind Bate Middle School last year. This is a great chance for us to show off how tennis is a growing sport in our town.”

The first matches are scheduled for today at 1:30 p.m.

Strike Out Cancer: Boyle, Danville honor those affected by…