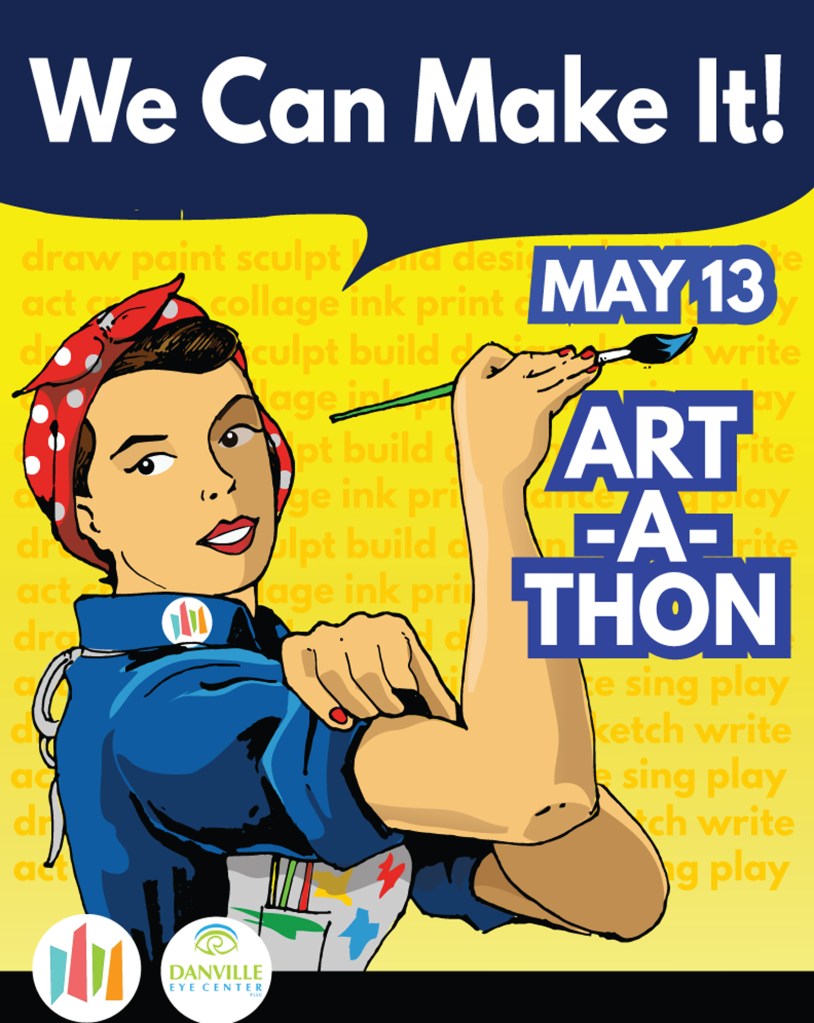 Community members will have a unique chance next weekend to observe as the Community Arts Center of Danville is “pulling back the curtain,” bringing together artists of all levels, ages and mediums in the first-ever Art-A-Thon to benefit the center.

“As far as we know, this is the first of its kind — ever — for Danville. So that’s pretty cool,” said Kate Snyder, associate director of Marketing and Development at the Community Arts Center.

Attendance to the event is completely free, stressed Snyder.

The Art-A-Thon will take place from 10 a.m. to 8 p.m. Saturday, May 13, at the Community Arts Center and at Weisiger Park, both on Main Street. In the case of rain, outside venues will be relocated to inside venues, either at CAC or Boyle County Public Library.

Beginning at noon, there will be food from Tut’s and Brothers’ BBQ, drinks from Heart of Danville and frozen yogurt from Orange Leaf.

The event has been in the works since sometime last year, Snyder said.

“It was the brainchild of our ceramics instructor, Catherine (Thomasen),” Snyder said. “At some point last year, she said, ‘Hey, wouldn’t it be fun if we got a bunch of artists to agree to make art for a whole day?’”

Snyder and others loved the idea, and have been pleasantly surprised at the reaction from the art community — over 60 artists have signed up to participate, each in four-hour shifts.

“People have found their way to the event. I would get calls from artists that we, the Arts Center, have never heard from,” she said, joking that the Art-A-Thon was bringing “closet artists into the light.”

They range from young children, to teachers and professional artists. There are quilters, potters, painters and even an artist cutting free-hand silhouettes. A complete schedule is available at communityartscenter.net/art-a-thon/.

The variety of artists participating shows how much the Arts Center matters, Snyder said.

“It spoke to the degree to which artists in the community value the Arts Center, that they’re willing to participate in this event and to be champions for us. The education programs mean a lot to our artists — we hear from established artists that they wish a center like the Community Arts Center existed when they were kids,” she said. “They want to invest in this program for the next generation of artists that are growing in our community.”

Some of the artists at Saturday’s event will include those familiar to the community, such as Thomasen, an artist in her own right who has been working with clay for many years.

“It’s something I’ve always done … art my whole life,” Thomasen said. She will be working on a coral reef luminary — a globe that a candle goes in.

“I hope to do it outside, and to have a little area where people can come, sit down and make things next to me,” Thomasen said. “I want people to see the process of creating something.”

Thomas said the idea came to her after seeing various fundraisers — 5Ks where people get sponsors, walk-a-thons, dance-a-thons — and said she thought, “Why not sponsor artists in their craft?”

“We really want it to be an event that empowers the artists participating. The Art-A-Thon is all about the process of making the art, not the finished product,” Snyder said, explaining that people will see a side  they don’t normally observe. “We’re pulling back the curtain.”

It’s a good opportunity, Thomasen said, for artists to show off the kind of work that goes into creating a piece of art, too.

“(They’ll see) all the different types of creation that goes on at the Arts Center. Hopefully, that will spur their own desire to create,” she said. “If they see how things are made, maybe they will want to support the arts.”

Artists have been signing up for months, through CAC’s website and have created their own portals through which to raise funds for the center.

“The heart of the fundraising is that all of the artists have created their own personal fundraising pages, and like a walk-a-thon or a dance-a-thon or any of those ‘a-thon’ events, they have gone out and are encouraging friends and family to donate,” Snyder said.

Through their efforts, more than $8,000 has been raised, while a goal of $10,000 was set. Nearly 200 individual people have donated, from around the globe, thanks to some artists with international ties.

“We are spreading art through the community,” she said.

There will also be donation boxes at each artists’ station, the money from which will benefit the center. All of the money raised will go to supporting the center’s arts education programs.

“That includes scholarships to camp this summer, that includes free field trips to schools, any of the hands-on educational things that we do,” Snyder said.

She said they liked the idea, “the focus of the event is on making art, the proceeds are going to help more people make art.”

Art created at the event belongs to the artists, Snyder said.

Artists are working on their art for different purposes — some of the student artists are “bulking up” for Great American Brass Band Festival art sale, another artist is completing a piece for the Art-full Affair, happening next weekend to benefit the Arts Commission of Danville/Boyle County.

“We didn’t put any claim on what happened to the art when they were done with it,” Snyder said.

The Danville Eye Center; Stuart Powell Ford, Lincoln, Mazda; and Ambrosia Wellness are sponsoring the event. Ambrosia Wellness owners Clay and Sarah Cheatham will also be participating on Saturday, in a not-so-traditional way: by performing AcroYoga. 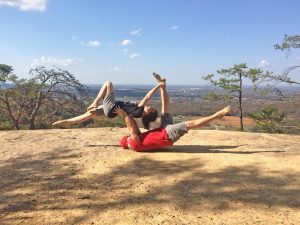 Photo submitted
Clay and Sarah Cheatham performing AcroYoga. The couple will be performing during the Art-A-Thon on Saturday, set to raise funds for the Community Arts Center.

They chose the style because she said it’s something people don’t see that often.

“It’s something Clay and I have been doing together for years. It brought us closer as a couple,” she said. “It’s pretty incredible in itself, the bond between you and your partner.”

They wanted to participate in the Art-A-Thon because their children have taken classes at CAC and the couple have both been involved with the arts community in Danville for about 10 years. Cheatham paints while her husband sculpts, draws and paints.

“It’s a good way to give back to the community,” she said.

The two are working on some routines — they do some to music — but will also do some stuff on the fly. “We have new stuff we’re going to try to get nailed down that we’ve not done in public before,” she said. “I’m excited.” Cheatham said it will be more of a demonstration, because it’s a physically demanding style of yoga, but said that it’s “so much fun.”

Other artists will be doing things that have an element of community involvement — including one of the youngest artists, Ruthie Dove.

Ruthie, 7, will be on hand with a Mandala tablecloth from the Coloring Table, owned by her parents Steve and Megan Dove, and said she wants people to join her “so we can have fun together.”

Ruthie loves to color because she says it comes to life when several people color together. She colors often with friends and with her brother, Sam and sister, Georgia. On Saturday, she’s looking forward to coloring with new people.

“I want to meet a lot of people,” Ruthie said.

The Art-A-Thon to benefit the Community Arts Center will be 10 a.m. to 8 p.m. at the center and at Weisiger Park in Danville. Food vendors will set up about noon.

The event will be moved from the park to the Boyle County Public Library if it rains.

For more information about the event, a schedule of the artists, or to donate, visit communityartscenter.net/art-a-thon/ 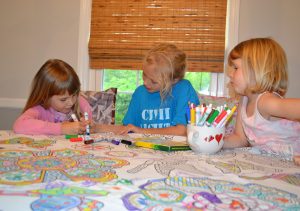 Photo submitted
Ruthie Dove, left, coloring her friend June Goodwin, and her sister Georgia Dove. Ruthie will be participating in Saturday’s Art-A-Thon and wants people to come color with her, so she can “meet a lot of new people.” 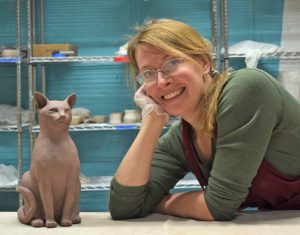 Photo submitted
Catherine Thomsen is a pottery instructor at the Community Arts Center, and will be on hand Saturday making one of her luminaries. Attendees are invited to join her in the process. 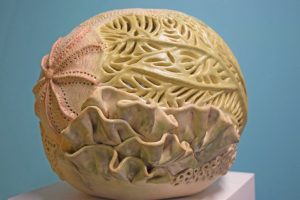 Photo submitted
Catherine Thomsen makes coral reef luminaries, and plans to continue working on one during the Community Arts Center Art-A-Thon on Saturday. She will invite guests to sit and create with her, too. 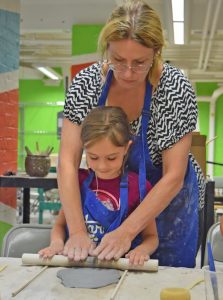 Photo submitted
Catherine Thomsen works with Eliah Snyder on pottery at the Community Arts Center. Thomasen is an instructor at the center and will be on hand Saturday making one of her luminaries. Attendees are invited to join her in the process. Eliah will also be there, making stuffed animals.