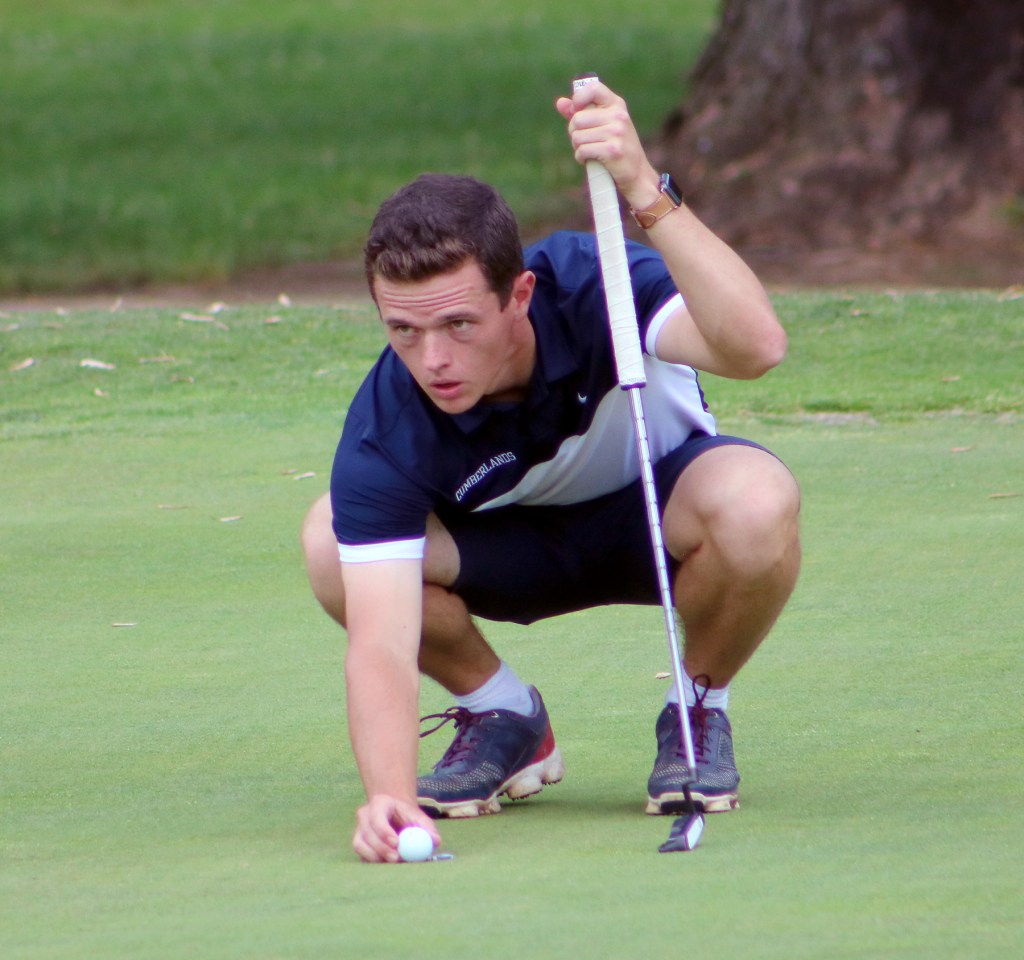 Photo courtesy of University of the Cumberlands Athletics Ben Kendrick shot a final round 67 and won his second straight MSC individual title with a par on the third hole of a sudden death playoff last weekend.

The difference between last year and this one couldn’t have been more stark for Ben Kendrick.

Heading into the Mid-South Conference men’s golf tournament a year ago, the Boyle County graduate was buried in the middle of the University of the Cumberlands roster, playing a No. 3 or 4. He had never won a college tournament and wasn’t expecting to that week, either.

But Kendrick ran away with the 2016 individual title, winning by eight strokes, and completely reframing how everyone viewed him — including Kendrick himself.

So this year, Kendrick came in with all the eyes focused on him as the defending conference champion and the No. 1 golfer for the Patriots. He delivered on the repeat, winning on the third hole of a playoff and securing his second straight trip to the NAIA National Championships, May 16-19 at TPC Deere Run in Silvis, Illinois.

“Last year was obviously sweet, I came out of nowhere,” Kendrick said. “It was special, it was my first collegiate win.

One carryover from last year was the manner in which Kendrick won, going into a playoff for the first time in his career. Kendrick two-putted for a par on the third hole of the playoff, beating Lindsey Wilson’s Rasmus Lind.

The fact Kendrick was even in that position was surprising to him. After the first days, he was six shots out of the lead and wasn’t even in the final group of the day. But he shot the low round of the tournament, making two birdies and an eagle in his last five holes to finish at 5-under-par 67 to rally and force the extra holes.

“I’m not going to say I was out of it, but my spirits were definitely lower,” Kendrick said of heading into the final round. “I thought I had done myself in. I didn’t even to play with the leader. The way I shot the low round of 67 and won in a playoff, the first time I’d ever been in a playoff, it was much sweeter than the first year.”

Lind will join Kendrick at nationals, as will the Cumberlands, Tenn., team, which won its first MSC team title by one shot over Lindsey Wilson.

The pressure was on Kendrick from the moment last season ended. He knew the entire team would be counting on him to shoot consistently low rounds in the 60s.

When preseason practices started in the fall, the pressure was affecting Kendrick to the point he said his game “took a step back.”

“I talked to my dad and realized all the pressure I was going to be under,” he said. “I was really feeling the pressure and expectations and thought they were affecting my game. My dad and couple of other mentors put it, as a competitor and someone who wants to be good at his sport, you have to embrace that pressure. It took an adjustment period at first, thankfully it came in practice and during qualifying.”

Kendrick had a goal of winning all the tournaments he entered this spring, and he came close, winning three of them. That goal won’t change when he tees it up in two weeks at the national tournament.

Unlike last year, when he had little experience on the Deere Run course and under that pressure, he’s confident heading into this season. He compared his comfort on the course to that of Danville Country Club, Old Bridge or Crooked Creeks — all courses he’s played multiple times.

“There are probably only three or four courses where I really know like the back of my hand,” Kendrick said. “They’re my home courses. … I can picture every single hole, where you hit the ball and what it will do. I feel like I really know the course. When you go into tournament and you’re trying to learn how to play the course, it can make it more difficult. Even in practice rounds (this year), I’ll be taking lot less notes. I’ll be feeling out the competition and what I need to do to compete.”

While there are certainly more discernable parts of his game which have improved, it’s the confidence Kendrick now brings into each round which has helped him the most.

“I think i’ve been there and kind of had a big growth in my game over the last two calendar years,” Kendrick said. “I won’t say I’ve done and seen it all, but when I won conference it was the first win I had won anything since my junior or senior year in high school. Since then, I’ve won six times and I’ve won a multitude of ways.

“Confidence goes along with expectations and my expectations have risen. A lot of times that can be damaging if your game doesn’t grow with the expectations. … The pressure I’ve had to perform under each round has taught me a lot, taught me how to stay in the moment and have confidence.”

Kendrick shot a 71 on the last day of the NAIA tournament in 2016, leaping him to a finish for 36th. If this year’s any indication, don’t expect that to be good enough for Kendrick this time around.