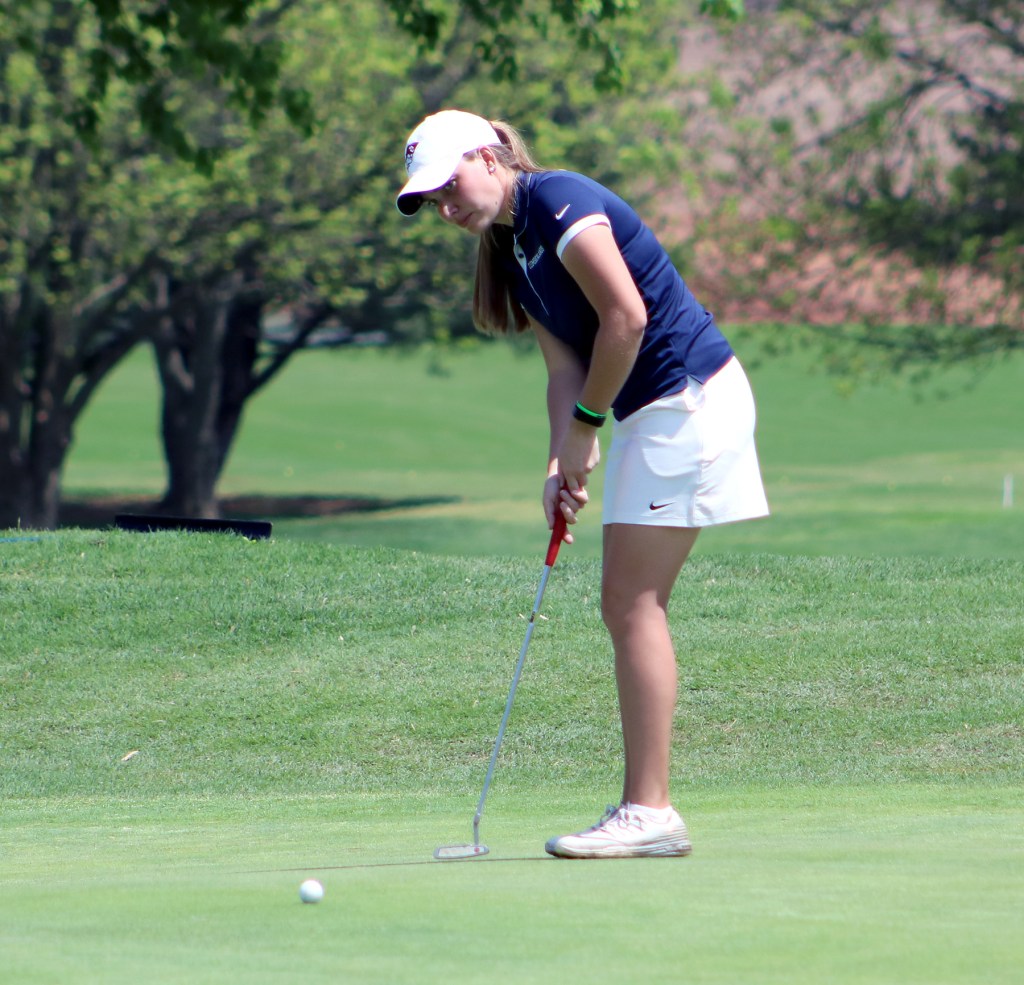 It’d be easy to try and reflect on Rachel Pingleton’s golf career at the University of the Cumberlands already. After all, the Patriots have accomplished so much in her four seasons in Williamsburg, including claiming their sixth straight Mid-South Conference team title last weekend.

But Pingleton isn’t done yet. Not by a long shot.

The win in the conference tournament gives them their sixth straight appearance in the NAIA National Tournament as well, held May 23-26 at the PGA National-Fazio Course in West Palm Beach, Florida.

“We’re just chomping at the bit to keep doing better, to keep breaking the previous school record of highest finish,” Pingleton said. “We’ve been right on the cusp of it to not only place high but be in contention and possibly win this thing. Being that close has made us work harder and motivated us to work harder for each other and this school.”

Last year, the Patriots had their highest-ever finish with a sixth-place showing, and sophomore Kaitlyn Riley made history as the school’s first individual champion.

In these last four years, Pingleton has noted how the competition of the other schools in the MSC has increased. And that’s not a bad thing for the Patriots, helping them better prepare for top-tier tournaments, like nationals.

“A team like Campbellsville, where my freshman year, they were good, but now they’ve become one of our biggest rivals. They actually beat us this year,” Pingleton said. “They’ve worked hard and all the other teams have as well. But in return, we have to work harder. We want to stay where we are and get better as a team even though winning has been consistent. We want to match their work or do even more than before.

“Each year we’ve improved a little more at nationals and it’s because the teams in our conference are getting better, and the tournaments we go to are getting tougher. It’s helped us in the long run and in those situations like at nationals. It’s not a walk in the park to get there anymore. We have to work hard. It’s not as easy.”

It certainly wasn’t easy at the conference tournament, even though Cumberlands posted the lowest team score each day and won by 12 shots over Campbellsville. Pingleton finished tied for seventh among individuals with a three-day total of 241.

It’s obviously not getting any easier as the Patriots continue to play the hunted year in and year out. But Pingleton said the team doesn’t pay too much attention to continuing the streak or any ‘what ifs.’

“We just plan to do what we’ve always done, play our game and focus on the team that year,” she said. “We’re a different team every year, and not only that, the teams we play against are different. They’re getting better. It becomes more difficult. … It’s in our minds a little bit, we want to keep the streak going, but it’s nothing like if we don’t, it’s a downfall. We try to focus on what we’re doing in that moment and do our best.”

The Fazio course will the third different course Pingleton and her classmates have faced at nationals. She admits it will be an adjustment after playing courses in Nebraska and Georgia for the last two national tournaments, but it’s not an altogether unusual experience.

“We play new courses every semester,” she said. “We know what we do when we walk on a new course, how we need to adjust and what we need to do to make our games top notch. Look at it as it’s a new course, we do this all the time, let’s get our game plan and go to work.”

And at least after playing in Savannah, Georgia, last year, she feels the team will know a little better what to expect from the windy conditions, quicker greens and bermuda grass.

“We know what to expect and the areas we’re going to have to hit hard and work on when we get down there,” Pingleton said. “We’re just doing our game plan like we always do when we’re prepping for a tournament.”

Pingleton is one of five seniors on the Patriots roster. While the season isn’t over yet, she did allow herself to reflect on what’s been a tremendous four years.

“That’s the exact word for it, it’s bittersweet,” she said. “The four years I’ve been here, golf has been a major part of what I’ve done at Cumberland. More than that, the people have been huge in my life. Going on to nationals have been a huge blessing. Not only do I get to go to nationals, I get a few more weeks with these girls. … It’s been awesome to do with with the people I’ve done it with.”