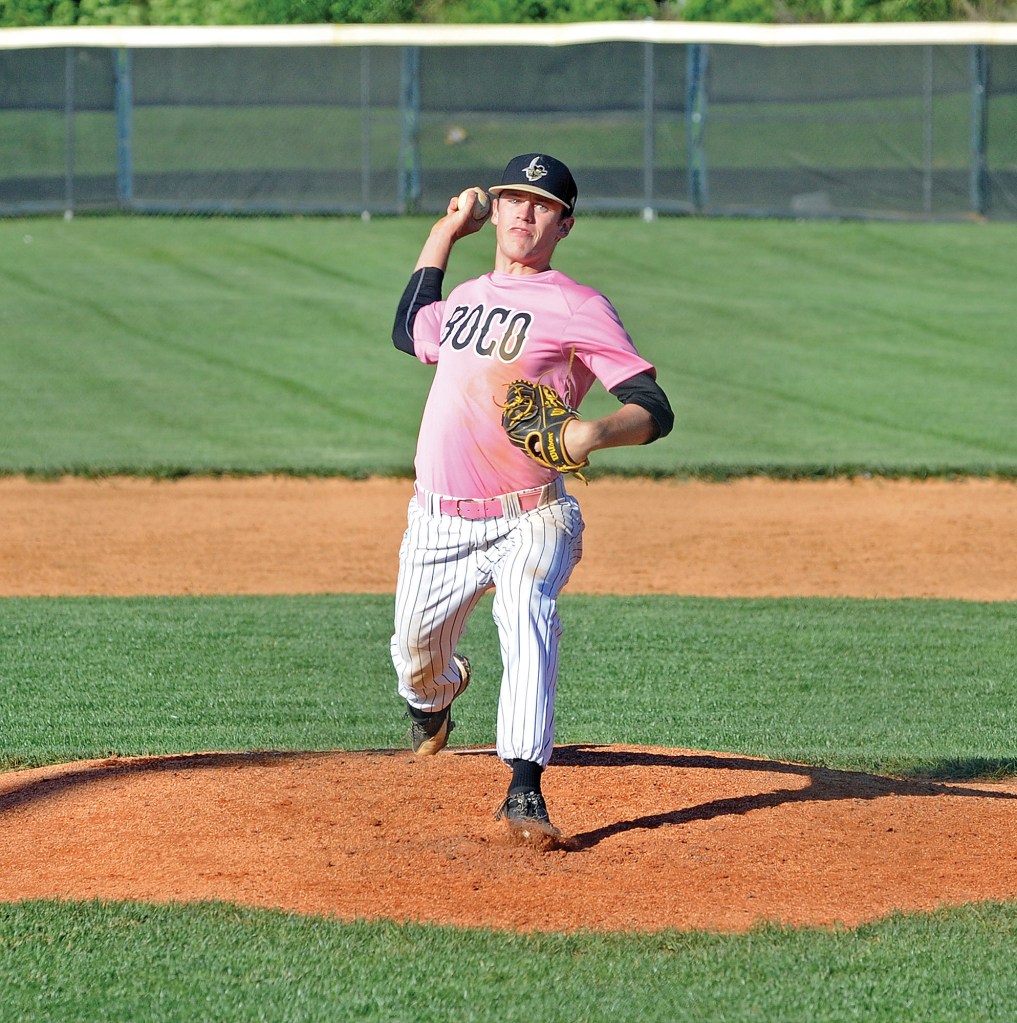 Boyle County knew it had a solid pitcher in Sam Tiller.

Not many people expected him to be this good, though. Even his teammates have been pleasantly surprised.

“I expected him to be solid, but I didn’t expect him to be lights out like he has been,” said Hunter Mason, Boyle County’s catcher. “Last game, he had like 12 Ks and two hits. I’m not surprised, but I’m surprised with the success he’s had coming off of freshman year. I thought he’d be good, but not like this.”

Tiller has been nearly unhittable this year for the Rebels after a year away from the sport because of injury: He’s pitched 56.2 innings over the course of 12 games, starting nine. His record is 9-0. He’s given up just eight earned runs for a miniscule 0.988 earned run average, striking out 61 batters.

“Really being 9-0 is just how good our team has been this year,” Tiller said. “A lot of guys have been hitting the ball, playing defense for me. It feels really good to do that because last year, you see your team lose and you think that maybe if you’re out there pitching, you might have won. That was really tough for me last year. I’m just having fun being back and playing ball with my friends.”

Boyle’s offense has been just as impressive as Tiller this year, averaging more than seven runs per game. But with Tiller on the mound, Mason says he and his teammates know that they don’t have to put up spectacular numbers for the win.

“We know when Tiller is on the mound, we don’t need 12 runs to win the game,” Mason said. “We usually need five or six, but you don’t need many runs with Tiller.”

Part of Tiller’s success could be attributed to the fact that not many teams know his name: He sat out last season with a back injury and was the No. 3 starter as a freshman.

But that doesn’t give teams an excuse now, coach Kyle Wynn said.

“I would maybe have said that early, but now, if people are following, they’re seeing his stats, we’ve got 10 games left and there’s no secret,” Wynn said. “Early on people might not have known, but now, everybody knows that if it’s a big game, he’s going to be on the mound. Early he could catch people off guard, but now, people know what to expect and he’s got to be even better.”

Tiller’s strength comes from his ability to keep hitters off balance. He won’t overpower hitters with his low-80s fastball but keeps them guessing with multiple pitches placed perfectly around the plate.

“He’s not going to overpower people, but that’s a testament to him,” Wynn said. “He can throw upper 70s, low 80s and throw pitches for strikes. Do that and you can beat anybody. That’s Sam’s game right there. It reminds me a little bit of Addison Coffey a few years ago, when you can throw different pitches in different counts, that means a lot.”

Against Danville on Tuesday, Tiller wasn’t his sharpest early on — he gave up a grand slam to Zach Dampier in the third inning — but picked up as the game progressed. After Dampier’s shot, Tiller didn’t allow another baserunner, retiring the next 13 batters.

That’s been Tiller this season, Wynn said. He just gets stronger as the game goes on.

“The only thing we’re really working on with Sam is he may get a little frustrated,” Wynn said. “Just keeping that composure and spot up those three or four pitches and he’s tough to beat. Sometimes he gets a little frustrated and leaves that fastball up a little bit, but he’s having a heck of a year. He’s our go-to guy right now.”

Mason being behind the plate has helped Tiller keep that composure.

“We played on the same rec league team when we were eight or nine, and we’ve played together ever since,” Mason said. “We just kind of know what the other person is thinking. It helps because I know when he’s out of his comfort zone or if he’s overthrowing because I’m just used to the way he throws.”

Down 5-1 after the grand slam against rival Danville, Tiller kept his composure.

“Got down 5-1, I was making some mistakes pitching and they were taking advantage of it,” Tiller said. “You’re sitting there thinking you might not go the whole seven (innings), but you at least want to compete your butt off as long as you can. Just what coach Wynn says, ‘Let your offense chip away.’ That’s something my dad tells me also, just to stay in there and keep competing, because you never know what will happen. You’ve got to just keep competing, then you settle in and you can keep throwing strikes.”

That’s what Tiller did against Danville and has done through 56 innings this year. When he gets ahead in the count, there’s not much hope for the hitter.

“The first time through the lineup, you see all the hitters, figure out what they’re about, then once you’re up as a pitcher, it’s just time for you to lock in, and that’s what I try to do,” Tiller said.

“I like to start with a fastball to get up in the count, because when you’re up in the count, it opens up everything you want to throw. You can go offspeed, another fastball. Whenever you get up 0-2, 1-2, you can set hitters up with whatever you want. I think that helps get guys out and keep them off balance. That’s something I really try to focus on is keeping guys off balance where they can’t guess the pitch.”

Another huge influence on Tiller’s improvement this season was his time on the gridiron in the fall. He started at quarterback for the Rebels, tossing 19 touchdowns in 12 games.

Facing a rush is quite different than facing a leadoff hitter, but Tiller said there’s plenty of similarities in the two jobs.

“I think playing quarterback and pitching is very similar because the ball starts with you every play,” he said. “You’re in control of the pace of the game. You’ve just got to let things go easily, because if you don’t, they’ll pile up on you. I think that’s a big thing also, just working out in football gets you stronger and playing football helps kids carry an aggressive mentality into baseball. It helps you compete.”

That’s all Tiller wants to do: Compete. That’s what killed him the most about missing all of last season, when the Rebels won the 45th District before falling in the first round of the 12th Region tournament.

“We want to make a run at region this year,” Tiller said. “That was our goal last year and it didn’t really go through for us. This year, we feel like we have a great team and staff to where we can win a two or three game tournament. We definitely want to win region this year, we just have to bring it every day. That’s what baseball is, if you don’t bring it every day, you’ll fall behind.”

Wynn said pitching coach Evan Teague has played a huge role in keeping the pitching staff ahead on the mound.

“I don’t have to do too much with pitching. We’ll talk about stuff and we’ll go through, but as far as leading the staff, it’s him,” Wynn said. “He calls a good game for the guys and I think he’s a great asset to our program. I don’t want to be the one to have to call pitches. I can turn my back and trust coach Teague will run it the way I want it to be run, and that has been from day one. I’ve been blessed to have him, coach (Ritchie) Lyons and coach (Cody) Ross.”

The Rebels are in the middle of a special season — barring any meltdowns, they’ll hit 20 wins for the first time since 2011. Boyle is 19-8 with nine games left in the regular season.

Tiller has played a major role in that record, but he says it’s down to how tight-knit the entire team has been this year.

“I’m really having a great time this season,” Tiller said. “We’re winning, we’ve really been working hard. You could see it (against Danville), guys on our team really love each other and I think that’s a big factor. We really appreciate playing with each other. Coaches have been good, coach Teague has helped me out a ton. He calls the game, he sets stuff up and I appreciate what he’s done to help me out. Hunter has been great behind the plate and we have great chemistry. I love to see guys playing with swagger like we did tonight.”