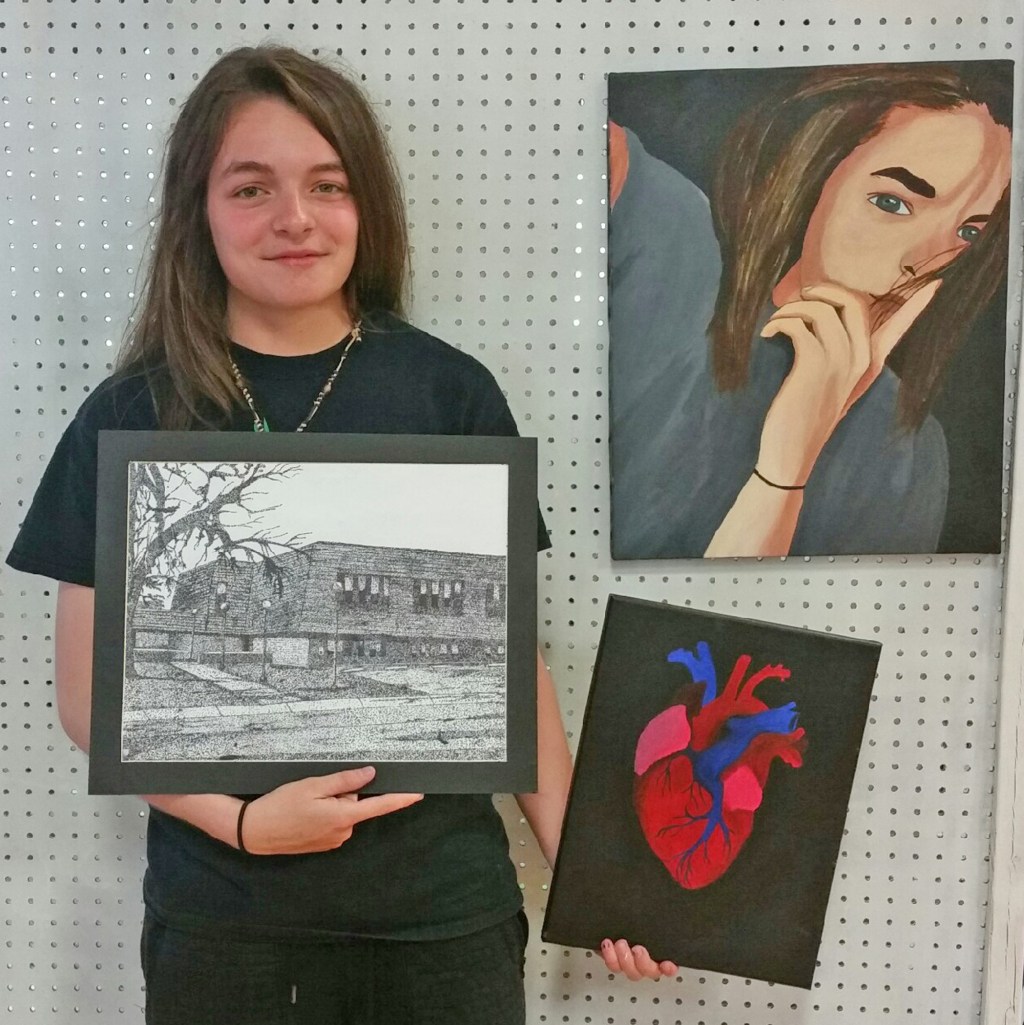 Kendra Peek/kendra.peek@amnews.com Abriana Norris with some of her works, including a self-portrait, a heart painting in process, and a pointillism drawing of Walker Hall.

A local student’s artwork will be featured on the wall of U.S. Rep. Brett Guthrie’s Washington, D.C. office, for a year.

Abriana Norris, a junior at the Kentucky School from the Deaf, entered the 2017 Congressional Art Competition for Guthrie’s Second Congressional District and was selected as the winner from among Boyle County submissions.

Norris’ artwork went on to win a Facebook contest with 657 likes and shares, in order to earn a spot on Guthrie’s office wall.

“I thought maybe I would have support — I didn’t expect that much,” Norris said.

Besides her art hanging in Guthrie’s office, Norris received a certificate signed by Guthrie and a plaque for the wins.

Norris is originally from Glasgow, Kentucky. She said she entered the contest after not being accepted to the Governor’s School for the Arts (GSA).

“I was a little down about (GSA). My teacher suggested I do this art competition instead,” Norris said.

She drew her favorite character, Lexa, from a television show — “The 100” on the CW, a character that has died on the show.

She likes being able to express emotions through her art and thinks that’s an important element, especially for a deaf individual.

“Deaf students want to show their emotions through art, because it’s a visual language,” Norris said. “I want to help show that emotion of the deaf student in a hearing world.”

She really likes depicting people and landscapes in her artwork, and “art that shows my emotions,” she said.

Norris enjoys working in the medium of graphite, and also doing pointillism, which uses hundreds or thousands of dots to create an image. Art, she said, has taught her a lot about patience.

Using pointillism, she drew Walker Hall — a building that was once the elementary school at KSD.

“I drew it because I have many memories in this building. It was my elementary school. I learned sign here,” she said.

Norris started her education in a public school setting and didn’t learn American Sign Language in that setting. She wasn’t getting what she needed there.

“My mom was convinced to send me here and I grew so much … The experience was amazing,” Norris said. “I wanted a keepsake of (the building).”

Norris said KSD has had a big impact on her life and she wants others to realize the importance of the school, too.

“I want hearing people to see art from a deaf person,” she said.

Norris said it’s important for students who are deaf to be allowed to go to deaf school, because they can better learn to communicate and can be with other deaf students in a community.

Norris said she likes math, too.

“You need math for art,” she said. “I really like art. It keeps me busy. It’s pretty much what I like to do. I like painting to cover the mess.”

“I painted a house and it looked bad — I made a lot of mistakes,” Norris said. “… She told me, ‘You can cover up the paint if you mess up. You can fix it. That’s why I started liking art — if you make mistakes, you can fix them.”

Her mom is a photographer who also paints and does other types of art, Norris said.

It was her mom’s passion for art that first piqued Norris’ own interest.

“My mom was very proud of me about winning this competition and my art going to Washington, D.C.,” Norris said.

“I feel like a lot of people will be seeing my art — and hopefully (they will) see my skills. I can’t predict what other people will feel, but I’m excited,” she said. “I want to get more deaf people to come to our school, too; hopefully our name will be out there.”

While Norris hasn’t fully decided what she wants to do when she gets older, she said might like to be an art teacher or an art therapist. She has looked at colleges that offer those options.

A high school student art gallery will be at Kerr Hall on the campus of the Kentucky School for the Deaf from 11 a.m.-12:30 p.m. on May 12. The public is invited to attend. There will be a silent auction and art from more than 12 students available for purchase. Abriana Norris’ art will be among the works on display. 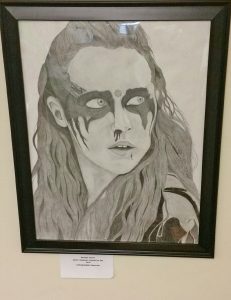 Kendra Peek/kendra.peek@amnews.com
“Unforgettable Character,” a drawing by Abriana Norris at the Kentucky School for the Deaf.