Question: Jerry, what in the world is this piece? The whole family is talking about it. My dad remembers that it was in his mother’s estate but doesn’t remember her wearing it.

It’s a pin of some kind but it has like a large hook that hooks up behind it. There are no marks and I don’t think that it’s gold. It’s about an inch long.

I don’t imagine it will have any value but I’m hoping for a good story. Thanks for the articles. I learn so much by reading them. 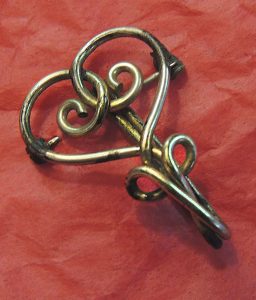 Answer: You have a very pretty and old fashioned chatelaine pin. In the late 18th and up to the mid 19th centuries, a chatelaine pin was a high status symbol for a woman. Early versions were worn on the waist and had a series keys and other necessary items. For example, the keys would have been to very import locks. Locks that protected liquor, sugar, jewelry, the pantry and other boxes or rooms that contained valuable commodities.

Necessary items that the lady of the house would have needed were such things like a thimble case, needle case, pencil, scissors, tweezers and other small sewing and household tools. When the lady of the house was to be away, the chatelaine was handed off to a trusted family housekeeper or elder daughter, awaiting the mistress to return.

As time went on and such things as sugar were not quite as valuable, the chatelaine was used more for sewing.

Your piece dates to the early 1900s and is from the tail end of the chatelaine history. By this time, sewing was being more and more pushed out in favor of store bought clothing and I guess that in some vain but valid attempt, chatelaines were used for small ladies’ watches, pendants and lockets worn on the breast or waist. By the 1930s they were thought to be hopeless relics from another age.

I have to agree with you, I think that your piece isn’t a karat gold, but more than likely gold plated. You can almost tell by those darkened areas. To be sure, show to someone who handles and deals in gold or jewelry. If it’s not solid gold and it’s not damaged and if the clasp is in working order I’d think that in a retail area that it would carry a price tag of about $25. Get it out and wear it. I think that they are charming. Was that a good story? Thanks for sharing it with us.

Forkland genealogy and history workshop is May 13