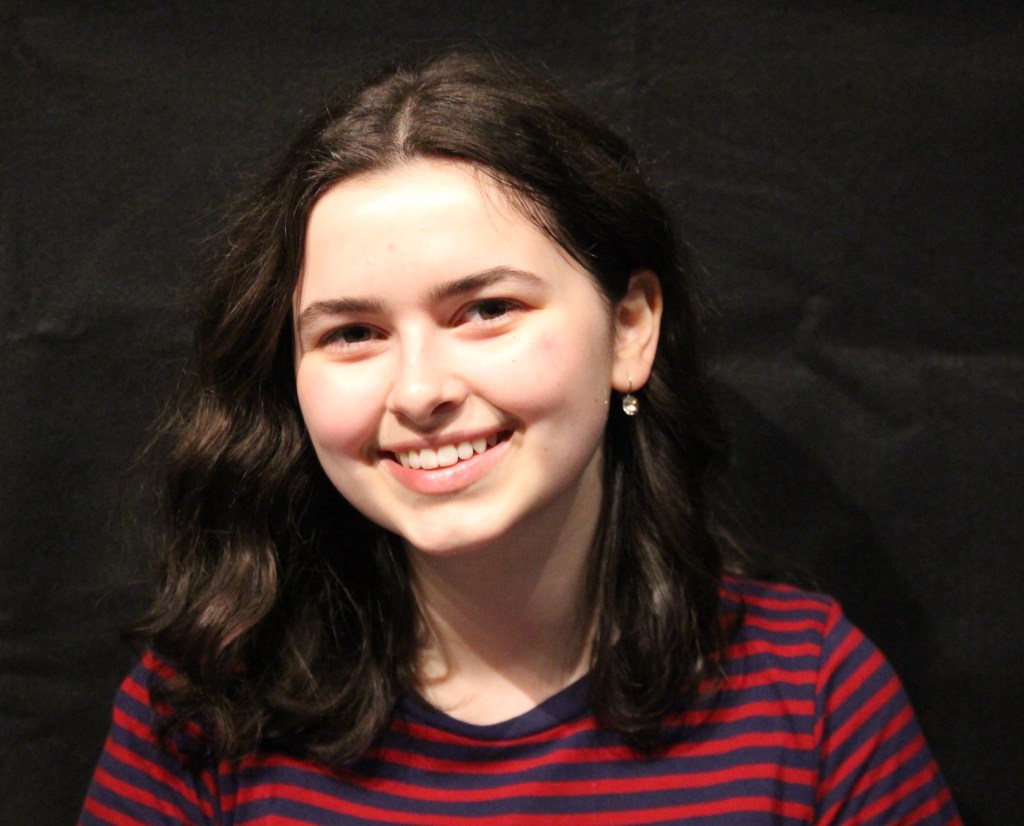 Grace Sheene will attend Rose Bruford in London, England in the fall. (Photo by Paige Glasser)

One of Shakespeare’s most famous lines from his play, “As You Like It,” says “all the world’s a stage, and all the men and women merely players.” As Grace Sheene, a DHS senior, goes into the real world, she will tackle the world from the stage.

Sheene discovered theater after seeing “The Sound of Music” at age 3. She was in her first play, “Annie,” at age six. Theatre has been a big part of her life ever since. Sheene said, “[Theatre] means communication and individuality and unity and family.  It means challenges.  It means having a purpose.”

She explained that while at first she was contemplating an English Literature or history major after high school, she decided that the path she truly wanted take was one that led to an entrance on stage.  “I have known for a long time that I want a career in theatre and/or music, and because I am interested in learning about the many aspects of these arts and gaining more experience in them, I decided to apply to intensive drama programs,” she said.

Apply, she did. Sheene, after thirteen applications, wavered between two colleges — Rose Bruford (London) and the New School (New York City).  “I applied to an array of larger universities, liberal arts colleges, and conservatories, but, after lots of research and my auditions with each program’s faculty, I decided that I really wanted a conservatory training.”

As to why she chose New York City and London as the location of her secondary education, she landed on what inspires her. She commented, “I chose to apply to several drama schools and programs in and around New York City and London because the two cities are the greatest cultural capitals of the world, and I think art is most profound when the people involved in it are able to offer diverse perspectives and experiences.”

In the end, she chose Rose Bruford due to financial reasons, the opportunities London offers, and how well she “jived with the faculty.”

Steve Meadows, long time teacher, director, and coach of Sheene’s, commented on Sheene’s growth over the years: “Grace has grown from a very talented freshman to a very talented senior with self-sufficient insights into literature and how to perform it. . . she has good dramatic sensibilities and is naturally insightful into the subtext of a scene, giving her performances depth most actors don’t provide.”

Sheene added, “When inhabiting a character, the actor often has to think, say, and do things he or she wouldn’t normally.  I find this keeps me grounded and always discovering new things about myself and the people and the world around me.”

Sheene is wary of committing herself to any strict long-term goals as she still young, but she hopes to one day also write and direct in addition to supporting herself with an acting career.

Through this experience she has gained some insight and advice: “Practice often, keep your options open, use logic in discerning what type of education and experience will suit you best, drink tea (or your equivalent calming ritual) when feeling stressed, always ask questions (email or call the college’s admissions office regarding any question you may have–in my experience they are usually able to answer most queries and know who to pass them on to if they can’t), and get in touch with a current student who you can ask questions, express your concerns to, and maybe even make friends with!  After all of that, go with your gut, and break a leg!”

‘Fate of the Furious’ 136 minutes of over-the-top action