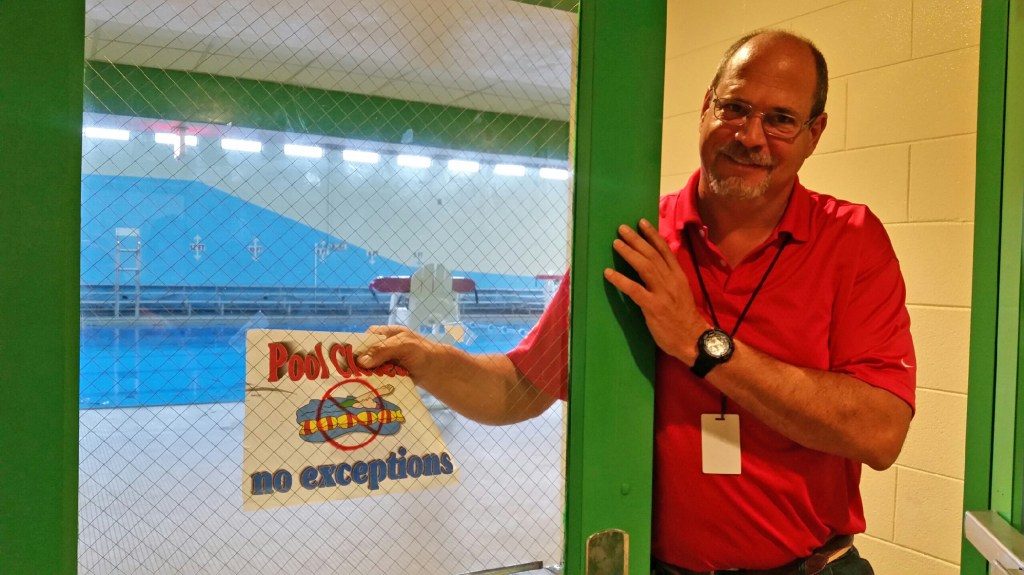 Kendra Peek/kendra.peek@amnews.com Billy Lange, atheletic director at the Kentucky School for the Deaf, takes down the "Pool Closed" sign at the school. The pool, which has been closed for eight years, will officially reopen for students on Tuesday.

There’s water in the pool at the Kentucky School for the Deaf for the first time in eight years.

“I am so thrilled for our students. That’s who I’m happiest for,” said Billy Lange, athletic director at the school. “They have been asking and asking for years when the pool is going to open. I’ve not been able to give them an answer.”

But now, he has an answer: Tuesday.

“It feels really great,” he said.

Students will get the first chance to swim in the poll following a ribbon cutting ceremony at the pool. The very first swim has been offered to the first student to donate to the project, Cloud Condor, who donated the first $2. Seniors will be the next group in line, Lange said.

Some of the students have never seen the pool filled with water, he said.

“They walk by, they look in — they just can’t wait; they’re ready to jump in — specially the senior class,” Lange said. “They want to be able to swim one last time before they graduate.”

The pool at the Kentucky School for the Deaf officially opened in 1975, Lange said.

It closed for what was supposed to be a temporary period in December 2008. According to a Feb. 3, 2013, article in The Advocate-Messenger, that closure came following the Virginia Graeme Baker Pool and Spa Safety Act, named after the grandson of James A. Baker, former secretary of state. The youngster died at the age of seven after he was pulled to the bottom of a spa by the suction drain. A similar incident happened in Lexington, just months before the regulation went into effect.

At the time of the article, Bill Melton, who became the school’s athletics director the year after the pool opened in 1975 and was the campus manager at the time of the closure, said that unlike those pools, the drain and filtration system at KSD relied heavily on gravity. Melton was also a member of the foundation.

Melton explained that there were other issues discovered following the closure, such as finding adequate drain covers and replacing other parts of the system. The work required using jackhammers to dig into the concrete around the drains, he said.

Cracks were created from the jackhammering in the cast iron piping system that operated the pool, causing leaks in the pipes. Problems continued to plague the repairs, and after being left empty for so long, things began to “dry out, rust up and seize up,” Melton said at the time. That included the caulking around the observation windows, which began leaking when the pool was refilled.

That’s when the Kentucky School for the Deaf Foundation started “Fill Up the Pool,” a fundraising effort to repair and update the pool.

“I can’t tell you how thrilled I am,” JoAnn Hamm said on Friday.

At the time the fundraising efforts began, Hamm was the executive director of the foundation. She said she had begun to worry the repairs would never be made, even after the money was raised.

The pool repairs were estimated to cost about $150,000. Adding to that the required 20 percent needed to be held in contingency, and the amount needed to begin repairs was $180,000. That was reached about a year after the fundraising effort began, in 2014.

At that point, the funds were handed over to the Kentucky Department of Education for the repairs to begin. Now that the pool will be open again, Hamm will be celebrating alongside Lange and others at the school.

“It’s most important that our students will be able to use it,” Hamm said.

She said the donations to the project came in large and small forms, including a few large anonymous donations, money from local businesses and individuals, and even small amounts from KSD students, such as the $2 from Cloud to start things off.

“The deaf community contributed a great deal. KSD Alumni contributed a large amount individually. We had a broad base of support,” Hamm said. “People felt it should be fixed.”

“It was depressing before,” said Lange.

Some fundraisers were also held by swim teams from neighboring schools that used the pool before it closed.

“The Boyle County and Danville swim teams are over the moon, because they have someone to swim against and somewhere to swim again,” Hamm said.

This fall, KSD hopes to add a swim team — the first since the pool closed, Lange said. The school is in the process of finding interested students to participate. He said they need at least four students.

Lange is in the process of finding lifeguards for the pool, too. They will need several, he said, as the space will be in high demand until the end of the school year and during summer school.

The pool will be used for P.E. classes and by the swim team, as well as for therapy for students who need it, Lange said.

Lange said KSD is also working on a fitness room adjacent to the pool that will have a treadmill, ellipticals, and other workout equipment, as well as a space for therapy.

It should be open by the fall semester.

“We are trying to promote wellness across campus,” he said. “It will be really nice.”

There will be a ribbon cutting ceremony for the re-opening of the pool at Kentucky School for the Deaf at 4 p.m. Tuesday, in the Thomas Gym on the KSD campus.

Currently, only KSD students will be able to use the pool. Those interested in donating to the upkeep or other groups hoping to potentially use the space can contact Athletic Director Billy Lange at billy.lange@ksd.kyschools.us. 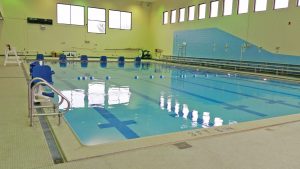 Kendra Peek/kendra.peek@amnews.com
The pool at the Kentucky School for the Deaf will officially open for students on Tuesday, after having been closed for eight years.