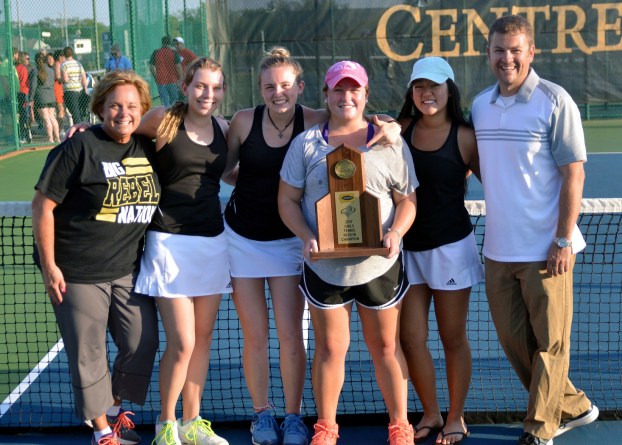 It’s been a season of firsts for the Boyle County girls tennis team, and it was never more apparent than Tuesday night at the 12th Region tournament.

The Rebels, who claimed the program’s first undefeated regular season this year, added another ribbon to their haul — a second-straight region championship. They secured it with two wins in Tuesday’s semifinals at Centre, giving them 11 points before today’s championship matches. 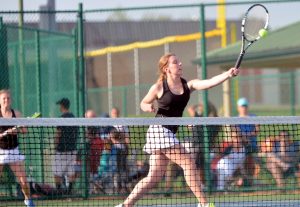 Kate Leahey and Laura Nolan beat top-seeded Courtney Gettler and Alexa Slone of Garrard County 6-4, 6-3, giving Leahey and Nolan their first trip to the region final after falling in the semifinal the last two years.

“It’s really just about winning every point, not even every match, but every point,” Nolan said. “… We’ve really grown a lot in our play, even in this tournament. I think that really showed.”

Leahey said, “We don’t focus on the bigger picture. We don’t say, ‘Imagine us upsetting the first seed.’ We focus on getting every single point, that’s what we tell each other through the entire match.”

But still, it was pretty special to finally get over that hump.

“This feels amazing,” Leahey said. “… Garrard has beaten us several times before. We’ve never beat Garrard, so we had nothing to lose coming in. I think that’s what helped us. I felt a little nervous at the end, but we’re very good about keeping each other in the zone.”

Anna Duncan clinched the team championship with a 7-5, 7-6 (7-4) win over Casey County’s Amber Pierce in singles play. This is Duncan’s second straight appearance in the region finals, but first as a singles player; she was a finalist in last year’s doubles bracket with Bailey Pierson.

“Last year, (Pierce) beat me two times, and this year I beat her easier than this. I mean, it wasn’t easy, but especially in the first set (Tuesday), I knew it was going to be a long match,” Duncan said. “I enjoy it. I think we both played our hearts out.”

With a loaded roster back from last year’s championship team, repeating was a goal from the beginning, according to coach Paula Thomason.

“I’m so proud of the girls, they worked so hard for it,” Thomason said. “… There was a lot of hard work. There weren’t a lot of ups and downs, our record is 15-0. But they wanted it. They tasted it, they craved it, and when they got down, my pep talks came in handy and they pulled through.”

While Slone fell short of her third straight trip to the region final — she teamed with Kacie Dotson to win last year’s title — she will make a third trip to the KHSAA state tournament, along with all the other semifinalists, next weekend in Lexington.

Casey County won’t finish lower than a tie for second place in the team standings, and Garrard locked up a fourth-place finish. 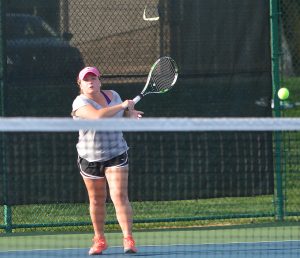 Jeremy Schneider/jeremy.schneider@amnews.com
Boyle County’s Anna Duncan advanced to her second straight region final — and first as a singles player — with a tough win in Tuesday’s semifinal.

While the Rebels were celebrating their region title, there was still a matter of Wednesday’s championship matches. Duncan said the team championship gives her a boost heading into her championship match with No. 1 seed Casey Kibler of East Jessamine. Kibler beat Boyle’s Mia Kendrick 6-0, 6-0 in a semifinal.

“I’ve played Casey before, it’ll be a good match. We kind of play a similar game, so it’ll be a battle for sure,” Duncan said. “This excitement really does propel me into tomorrow.”

In the doubles bracket, Leahey and Nolan will face Casey’s Laci Lee and Sarah Harne, who upset second-seeded Ashley Graves and Elsie Kibler of East Jessamine 7-5, 6-4.

The girls final matches are at 6 p.m. today at Centre.

Despite the loss, Carver and Morgeson qualified for next weekend’s state tournament in Lexington.

West Jessamine and Wayne County are deadlocked in the team standings, and each school has a participant in today’s finals at Centre. Wayne’s Zach Dishman, the seventh seed, will face top-seed David Gadd of Berea, and West’s top-seeded doubles team of Brody Bilderback and Tanner Sparks face Katanbaf and Nickell in their final.

The boys final matches will be at 6 p.m. today at Centre.

The Boyle County girls tennis team already has a perfect regular season under its belt. Now the Rebels are aiming... read more