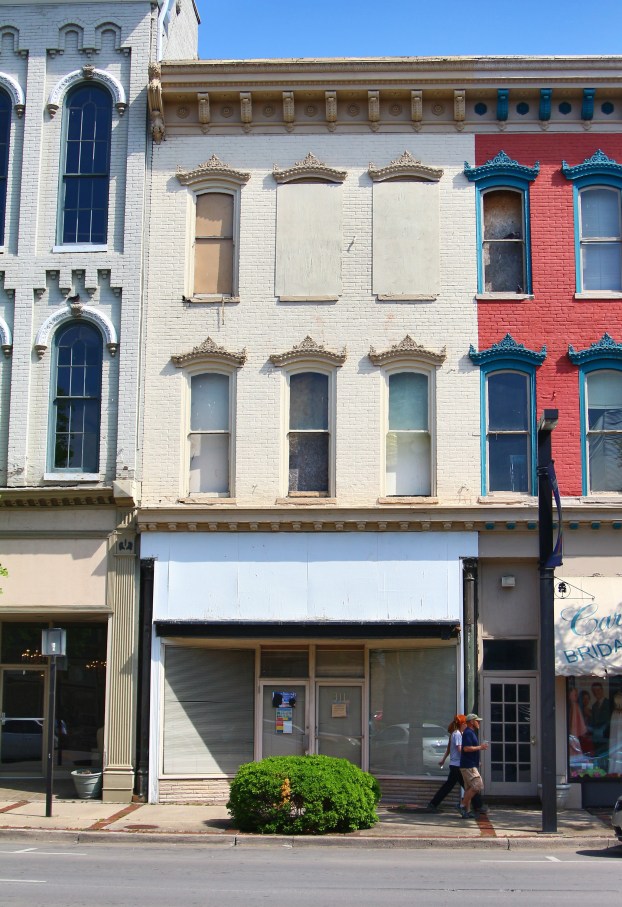 The City of Danville will wait to take action concerning a condemned Main Street building while its owner works to make repairs and restore the property.

The property at 311 W. Main St., owned by Ann Yager McCrosky, was on the Danville City Commission’s agenda Monday night so that commissioners could potentially take action to pursue in court demolition.

However, Mayor Mike Perros told commissioners he had “two very productive conversations with legal counsel for (McCrosky), who has assured me that they have developed a timeline and that timeline will be followed.”

“There were electricians in the building today and they’re already starting (to work),” Perros said. “Like my father says, it’s easier to catch flies with honey than it is with vinegar. So with your acceptance, I’d like to give this an opportunity to move forward in a positive way and see if we just can’t get on down the road with what we all want here — and that is not only a stabilized, but a renovated property in the middle of a block in downtown Danville.”

Commissioner Kevin Caudill asked Perros what the timeline for renovations to the building is. Perros said he doesn’t have the timeline yet, but it’s supposed to be presented to City Manager Ron Scott, who will be able to follow up on it to make sure it’s being followed.

The Architectural Heritage Board urged the city to take action concerning the property in an April 19 letter sent by AHB Chairman Tom Tye. That letter documented a lengthy history of the AHB trying to work with owners of the property to restore the building and failing repeatedly to get results.

“There is evidence of mold, cracking of plaster/brick, bowing walls and structural instability on adjacent buildings, which lends to our concern that someday soon, we could potentially lose two or there significant buildings in our historic district, due to water damage from 311 W. Main St., if action is not taken immediately.

Tye attended Monday’s commission meeting and was supportive of the council’s consensus that it would wait to take action pending the timeline mentioned by Perros.

“You have honorably accomplished everything that I would have requested,” Tye said.

Barbara Hulette with the Boyle Landmark Trust was also complimentary of the decision.

“We were going to express concern and interest in (311 W. Main St.),” she said. “Now that that has been very nicely accommodated, I want to thank the city very, very much — we’re deeply grateful for the work that has gone in to this — as well as the AHB for their work that they’re doing. This is the total picture of how preservation should really work.”

When the AHB first voted to push the city commission to act on the property, McCrosky, one of the owners of the building, told The Advocate-Messenger there were “big things in the works” and she was still planning to renovate and restore the building.

“I’ve owned it for the last three years. We’ve been working on it … I should have had a better plan and that’s where my inexperience comes into play,” she said in April. “I kind of bit off more than I could chew, but I have the experience now.”

According to the AHB’s letter to the commission, McCrosky first told the AHB about plans for the building in May 21, 2014. It was “the first time the AHB has received communication from any owner of the building and the conversation was very positive and promising,” according to the letter.

Plans for the building at the time were to “have retail on the first floor and apartments on the second and third floors,” according to the letter.

The AHB discussed repairs to the property a total of seven more times after that, with the most recent discussion happening at its April meeting, the letter shows.

There’s water in the pool at the Kentucky School for the Deaf for the first time in eight years. “I... read more