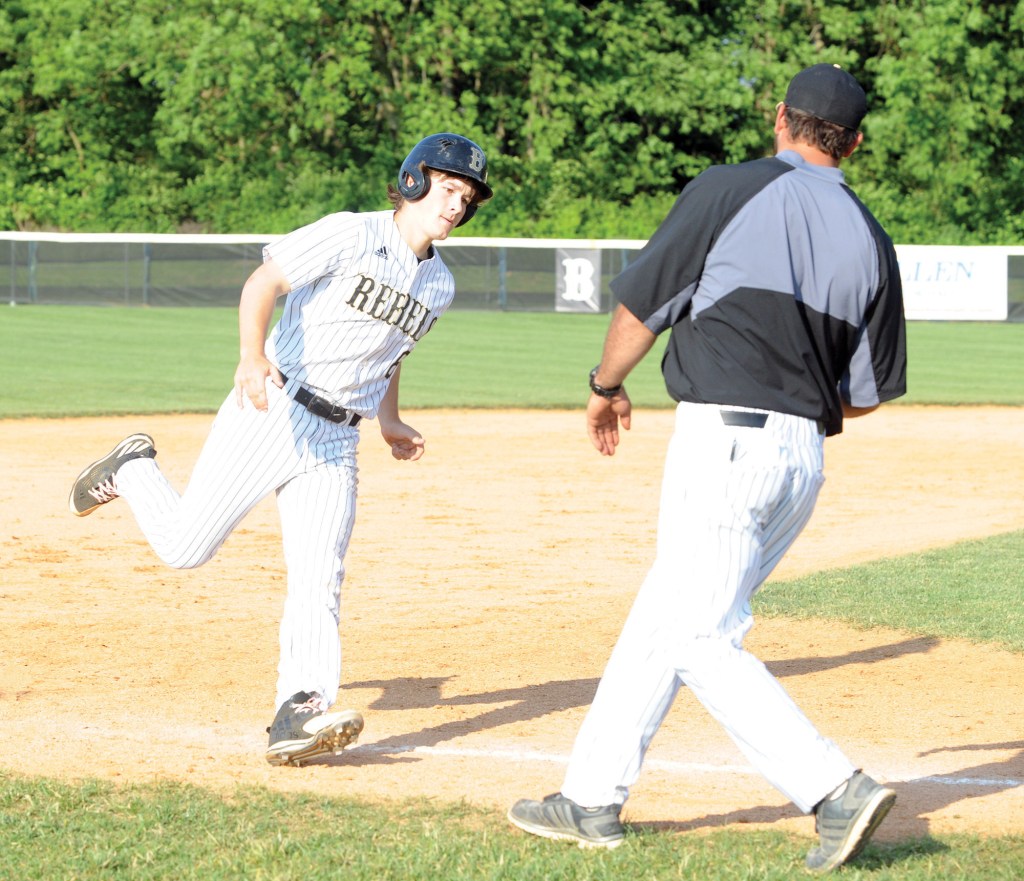 It was a wild night in the 45th District.

Boyle County found a way to stay on top.

The Rebels trailed on four different occasions Tuesday but came back each time to win 7-6 behind a two home-run performance from Ty Dragan, including a walk-off shot.

Dragan said he told his teammates in the fifth inning that it looked like the game would end in a walk-off.

“Normally when I go to the plate, I’m always calm,” Dragan said. “Coach gives me the signs and I just step in the box. I’m a good two-strike hitter normally, I just try to make contact with the ball.”

Dragan finished 2-for-3 with three runs batted in to lead the Rebels in a back-and-forth contest.

Both teams sent their best pitchers to the mound in a pivotal district game: Boyle needed to win to stay in the No. 1 spot in the district. Lincoln’s Noah Horton and Boyle’s Sam Tiller tossed eight scoreless inning the first time these two teams met, resulting in a 2-0 victory for the Rebels in nine innings.

It was clear from the beginning that it wouldn’t be a low-scoring game.

Lincoln led 1-0 before Boyle leadoff Karson Thompson stole three bases to tie the game. The Patriots took a 2-1 lead in the second and 4-1 lead in the third.

Lincoln coach Tee Ellis said his team has been working in the box and it showed Tuesday.

“We wanted to be ready,” he said. “We’ve been working on hitting a lot in the past few weeks and it has paid off. We left some guys on base, if we score half of those it’s a different ballgame.”

Dragan hit his first home run with two outs in the bottom of the third, scoring teammate Cameron Walker. Tristen Helton hit a solo home run in the fourth inning to tie the game, 4-4.

“He’s not a typical freshman,” Boyle coach Ritchie Lyons said. “He’s got a good maturity about him that most freshmen don’t have. He’s been in the lineup all year, we needed him to pitch today and he came through for us.”

Baker didn’t allow a run in 2.2 innings of work, giving up just two hits and a walk while striking out three. He was shaky early — he walked the first batter he faced on four-straight pitches below the zone — but Lyons said he settled in well.

“I don’t think he threw a strike in the bullpen or warming up,” Lyons said. “He was throwing them in the dirt. He said he wasn’t quite loose when he faced the first couple of batters, but he came back after that and said he was good and he got through.”

In the bottom of the fifth, Boyle’s Hunter Mason scored Walker to cut Lincoln’s lead to 6-5. Kevin Hatfield hit a pinch-hit two-run home run in the sixth inning but was called out after the umpire said he did not touch second base. Teague, who was standing in for head coach and new father Kyle Wynn, was tossed after arguing the call.

Lyons said he was just proud of his team for continuing to fight through adversity.

“I couldn’t be more proud of them. They fought through,” he said. “Got behind a couple different times, but they showed a lot of guts. They’ve done that all year. They have got a good attitude when things go bad, they don’t get down, they keep coming back, keep fighting.”

After Hatfield’s would-have-been homer, the game was tied 6-6. Ellis swapped Horton with Jared Long, and Long earned a strikeout to end the inning.

“He did a great job tonight and kept us in it,” Ellis said of Horton. “He was sick going in, he was out on the mound coughing. He had a bad headache going into the sixth inning. He had lost some velocity and missed that last spot. Jared came in and got the out to end the inning. Even though they hit the home run, we felt like we had some momentum.”

The Patriots left 11 runners on base, something Ellis said was the difference in the game.

“It’s a tough loss for the boys. I hate it for them,” Ellis said. “But if we do a few things different, it’s a different outcome. I thought defensively, we played really well. We just need to score runs when we get runners on base. I keep going back to that, but if we’re up five in the last inning, that home run doesn’t matter. Every at bat matters.”

Boyle had two hard-hit outs in the seventh inning before Dragan decided the game, in walk-off fashion.

“He’s the epitome of a baseball player,” Lyons said. “I’ve never seen anyone who loves the game as much as he does. He’s going to compete till the last pitch.”

Dragan said the Rebels’ hitters — including Mason behind him — were a big part of their win.

“It’s really nice because it gives me a chance to (homer),” he said. “If it comes down to them pitching to me or walking me, I’ve got Hunter right behind me.”

The win puts Boyle at a perfect 5-0 in district play, with a decisive game against Danville looming on Thursday.

Lincoln falls to 2-4 in the district but competed in every loss, making Thursday’s crosstown tilt between the Admirals and Rebels all the more important.

“I feel like the district is wide open, we’re as good as any team in the district,” Ellis said. “Our record might not reflect that but we’ve lost four district games, by a total of seven runs.”