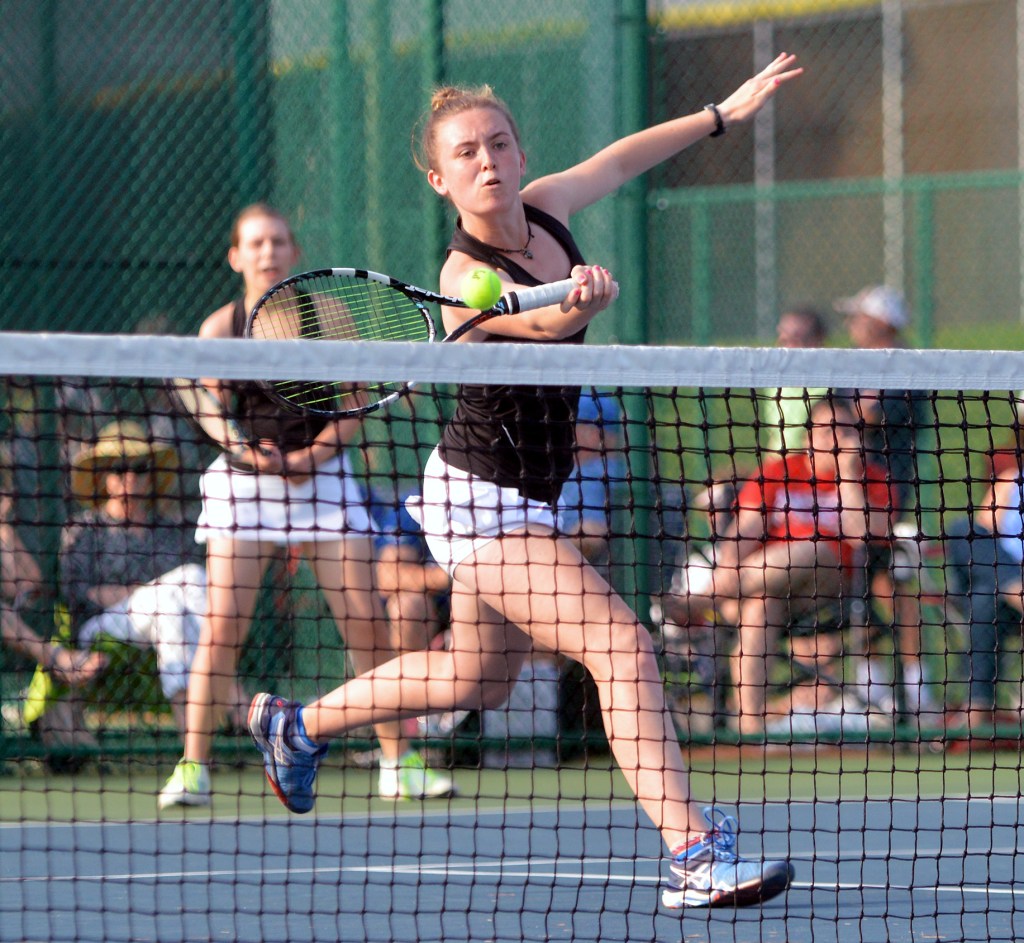 Jeremy Schneider/jeremy.schneider@amnews.com Kate Leahey of Boyle County reaches out for a shot at the net during Wednesday's 12th Region tournament doubles final match at Centre. Leahey and Laura Nolan won the doubles title with a 6-4, 6-7 (4-7), 1-0 (11-9) win over Casey County's Laci Lee and Sarah Harne.

The first time Laura Nolan and Kate Leahey appeared in the girls tennis region tournament for Boyle County, they lost in the first round. It was so bad, in fact, one of Leahey’s serves somehow bounced off her foot.

Leahey pointed out that fact Wednesday night only to prove how far the duo has come. They’ve now gone from a one-and-done team as freshman to 12th Region doubles champions as seniors. 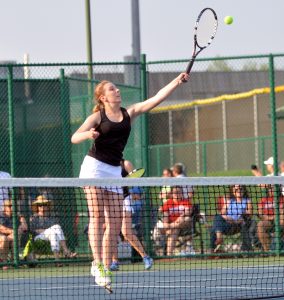 “Going into this, I was going to be happy as long as we played a good game,” Leahey said. “… I knew this was going to be a tough match. When we came off winning the first set, that gave me a confidence boost.

“But you’ve already won one and it gives you the picture of winning the next one, so it makes you more nervous. The second set I was nervous, the tiebreakers I was extremely nervous.”

It’s the first individual region title for Boyle in nearly a decade. And it paired up nicely with the team title the Rebels won after Tuesday’s semifinal round, their second straight team title.

“It feels amazing to look at where we’ve come throughout high school and even further back,” Nolan said.

Casey finished second in the team standings, winning a tiebreaker with East Jessamine.

“I’m proud of them,” Casey coach Marvetta Overstreet said. “They gave their very best, made a few more errors than they needed to. Laci rolled her ankle in the first set early on, it limited her abilities. That’s not an excuse. They fought back and Leahey and Nolan did an impressive job of getting the win.”

“(Kilber) is a powerhouse,” Boyle coach Paula Thomason said. “I told Anna, ‘Don’t beat yourself up, just do what you can do, go out there and get through it. This doesn’t define you, you’re bigger and better than anything you do tonight.’”

Leahey and Nolan won the first set 6-3, winning the final two points in a back-and-forth set. The second set started out in the same manner, with Boyle holding a 4-3 lead until Lee and Harne reeled off two straight points for a 5-4 lead. 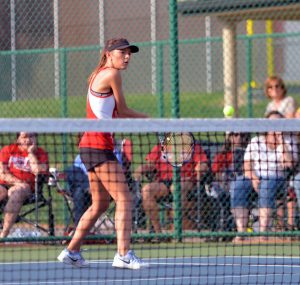 Jeremy Schneider/jeremy.schneider@amnews.com
Casey County’s Sarah Harne lines up a shot in Wednesday’s match. Harne and partner Laci Lee rallied from a first set loss to force the region championship match into two tiebreakers, after the second set and a super tiebreaker to decide the winner.

Boyle rallied to score two of the next three points to tie it at 6-6, but Casey steadied and won the set to send the match into a super tiebreaker.

“The second set and tiebreakers didn’t change our mindset of play because we always say to persevere and not go after the ending picture,” Nolan said. “… I’ve seen my nervous play, and I didn’t want to do that.”

Neither team could get much breathing room in the tiebreaker, but Boyle won the final two points after Casey tied it at 9-9.

Now Leahey and Nolan get to take all the confidence from their first region title into next weekend’s state tournament in Lexington.

“The biggest thing we’ve learned from regions is we can come back from anything,” Nolan said. “We won a match where we lost the first set 1-6, this one we had to play two tiebreakers, we had to play another super tiebreaker, I just think getting that mindset of we can do this no matter what.”