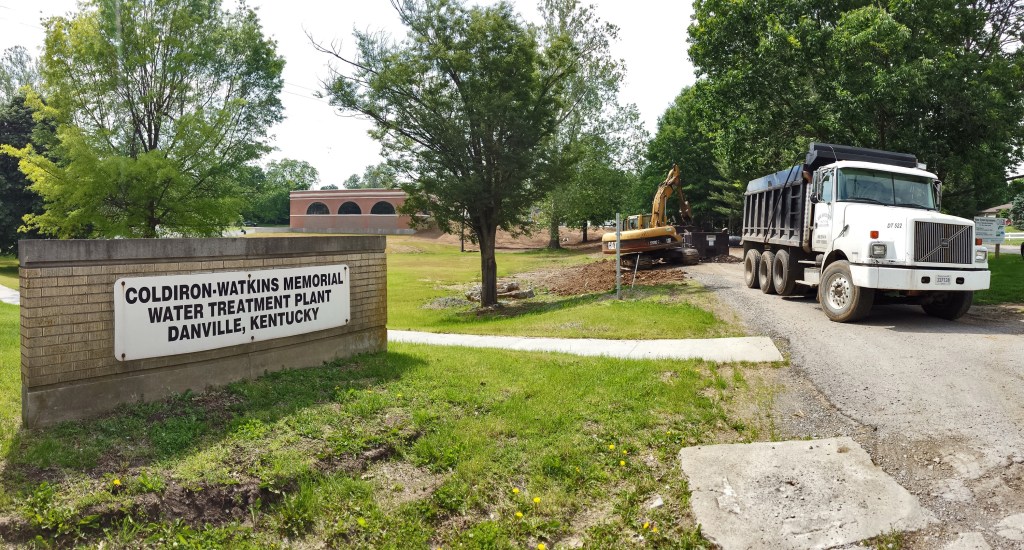 Ben Kleppinger/ben.kleppinger@amnews.com A $23.7 million upgrade to the Coldiron-Watkins Memorial Water Treatment Plant along Lexington Avenue in Danville is nearly complete.

Danville is nearing the finish line on a $23.7 million overhaul of its water treatment plant off of Lexington Avenue.

Judy Construction has completed about $22 million worth of work on the years-long project, meaning the city is about “92 percent spent,” said Brent Tippey with HDR, the engineering and architecture firm hired by the city to manage the project. 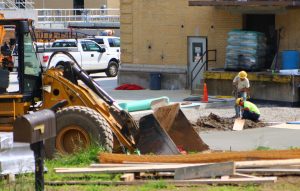 “It was roughly 1,150 days ago that I stood before this commission and asked for the approval to award the contract for construction,” Tippey told city commissioners Monday night. “It has been a long march and we are near the end. I think as you drive by, you can see the progress apparent on the outside — the seed and straw … you can see the building is being finished, the concrete drives and delivery areas being finished, blacktop going in — a little bit of the resumption of the use of that property for walkers and joggers.

“We’re excited about the fact that soon, there will be park facilities back in there and they’ll be able to use it again.”

There are two main items yet to be completed, Tippey said: a pair of “chemical equipment facilities,” which he said are “being installed as we speak;” and a backup-power generator, which has to be the last thing installed.

“The schedule we have right now shows us being substantially complete with the project in terms of functional use by the end of May,” Tippey said.

As the project nears completion, Tippey said it will be necessary to keep Cecil Street, which runs behind the Coldiron-Watkins Memorial Water Treatment Plant, closed. 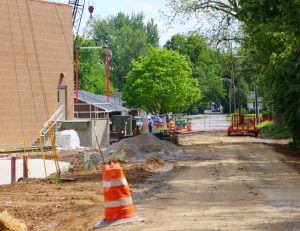 Ben Kleppinger/ben.kleppinger@amnews.com
Work on Danville’s water treatment plant has led to the closure of Cecil Avenue behind the plant for more than a year. The newest estimate is that the road could be reopened by the end of May.

“Until we can get some fencing up, we would still like to keep that closed a little bit longer. That is one exception to the rule of progress that we’re making,” he said. “The contractor has had some challenges on the backside, so the fencing is supposed to be started in the next two weeks and we expect by the end of the month that the fencing will be finished in that area and hopefully we can reopen Cecil at that time.”

Commissioner Kevin Caudill noted that he continues to hear regularly from people about the street closure; they wonder when it will be reopened.

“When we were able to send the contract out, we thought that would be at most like a six-month closure, and it certainly has exceeded that,” Tippey said. “There’s one decent reason after another not to open it up as long as traffic isn’t impeded just terribly.”

According to news archives, Cecil Street was first closed in the late fall of 2015. In May 2016, Tippey anticipated the road would need to remain closed for “several more weeks,” according to a news article in The Advocate-Messenger.

In September 2016, City Engineer Earl Coffey said a “labor shortage” was delaying work at the treatment plant and requiring the closure to continue. He estimated at the time that the road would “reopen towards the end of October.”

In mid-February of this year, Coffey told city commissioners it would be another four to six weeks before the street could be reopened because of the continued need for heavy equipment to be in the area of the street.

Tipped said overall, the quality of the work from Judy Construction, which was awarded the bid for the project in October 2013, has been very good.

“We’re very pleased with it and I think you all will be pleased with it when it’s all done,” he said. “There’s a couple areas we have to clean, as with any project of this magnitude … and a couple things have to be redone and we’re working with the contractor Judy to get that done now.”

Tippey and Coffey expect to do a presentation on Danville’s water treatment plant upgrade project at a “water professionals conference” in Lexington this summer. Tippey said the conference is the annual meeting of the Kentucky and Tennessee American Waterworks Association and he expects there to be strong attendance as water professionals come to learn about how the project was completed and how well its performing.

Work on the project first began in June 2011, when Tippey and Rich Smith of HDR began working on preliminary designs. A groundbreaking signifying the start of construction was held on Jan. 28, 2014. At the time, it was expected to take 30 months to complete, according to news archives, which represented a finish date in the fall of 2016.

The project is designed to increase Danville’s capacity from 10 million gallons per day to 12 million and implement improved water treatment systems that protect water quality. The treatment plant gets its raw water from Herrington Lake, which officials tout as a reliable source of high-quality water.

Tippey said despite various pieces of the project that have been under way, the city has essentially had “full use” of the plant since August 2016.

The city is expecting to hold a dedication marking the completion, which will be attended by “many notable celebrities and dignitaries,” Tippey said. The dedication will likely be “toward the end of summer, but the time we get everyone’s calendars squared,” he said.