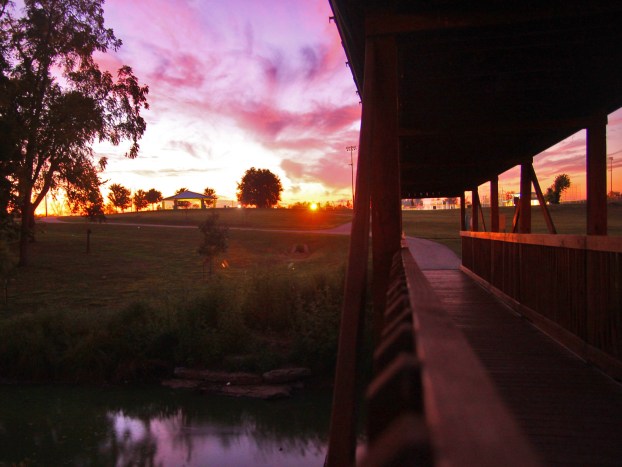 Ben Kleppinger/ben.kleppinger@amnews.com The setting sun is seen from the covered bridge in Millennium Park on a summer evening in 2011.

Work has begun on a parks and recreation master plan funded by the City of Danville.

A survey about current parks needs and desires was sent home with local students has already generated hundreds of responses, and the same survey is now available online for the public to take, City Manager Ron Scott said this week.

“Our first approach was to send survey packets home with school children in all of our schools. We had … 800 or so completed surveys back, so it’s an amazing response,” Scott said. “We have had some additional responses on the web-based survey and that is still open.”

City Engineer Earl Coffey said on Monday the online survey would be open for about two more weeks.

The survey takes about five minutes to complete and asks respondents their opinions on the current parks and programming options offered in Danville and Boyle County, and what they think would be most important to add or improve.

Scott said he and Coffey had an initial meeting last week with architecture and design firm Brandstetter Carroll, the company the city is paying $50,000 to create the master plan.

The initial price tag for the new master plan was $77,500, but that was negotiated down to the $50,000 amount by the city. Danville officials asked Boyle County officials to participate in the project by providing half of the funding, but Boyle County magistrates said they were not interested and preferred to spend parks money on currently planned upgrades and improvements at Millennium Park.

The first stage of Brandstetter Carroll’s project is an evaluation phase, where the existing parks and resources are examined, along with local demographics and current parks plans.

Scott said he anticipates the entire project will take about nine to 10 months to complete.

One of the next steps will be forming a steering committee of local people to guide the process, Scott said. City commissioners Denise Terry and Rick Serres have said they would like to serve on that committee.

Scott said the steering committee will probably begin meeting in about a month, and hold regular meetings every other month or every few months during the project.

In addition to filling out the online survey, participants can stay involved and continue to let their voices be heard, Coffey said.

“You can provide ongoing feedback if you want to interact in that way as the project progresses.”

You can take the City of Danville’s parks and recreation survey by visiting danvilleky.org and clicking on “Parks & Recreation Master Plan Survey,” or by visiting the survey directly at survey monkey.com/r/DanvilleParks. The survey includes 19 question takes about five minutes to complete.

Danville is nearing the finish line on a $23.7 million overhaul of its water treatment plant off of Lexington Avenue.... read more