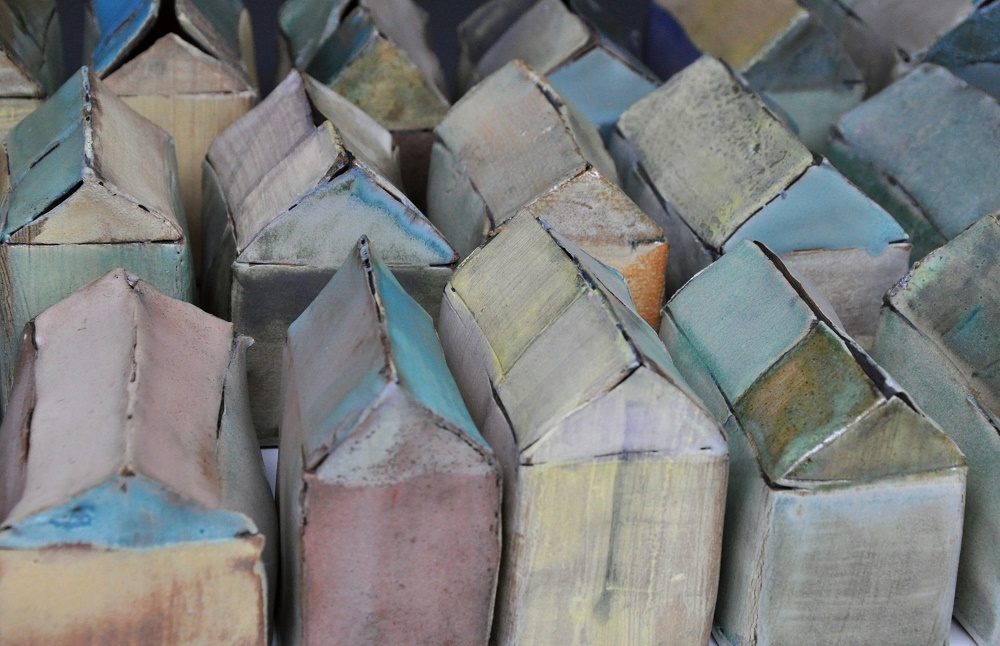 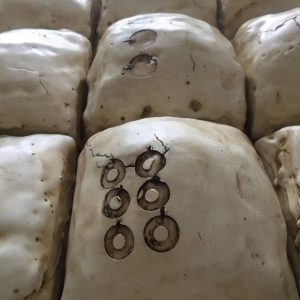 “This is one of those shows that started in the making over a year ago and has morphed into something much more spectacular than I could possibly have planned …” says Frankie York, owner of New Editions Gallery in Lexington.  Originally, she says, the show was going to feature only Patricia Baldwin-Seggebruch’s encuastics.

In addition to Pointer-Jia and Baldwin-Seggebruch, artist Joe Molinaro is also featured.

“I asked if Patricia would consider doing a long wall of pieces all one size and she received a grant for the materials …” York says, and Seggabruch was able to produce 33 different 21×7-inch encuastics on panel.  “They run the entire length of the longest wall in the gallery.  They are beautifully subtle and spectacular while provoking thought in their quiet presentation.”

Pointer-JIa has been a professor of art and head of the ceramics department of Centre since 1998. A piece she has in the exhibit, simply titled “House Forms,” represents the vernacular architecture she grew up with.

“The windswept Great Plains of western Kansas is a harsh and humbling place, requiring persistence and grit of those who settle there,” Jia-Pointer says. “I was raised there and left. These archetypal house or barn forms … are individual portraits of perseverance. Initially conceived as reliquary boxes to hold small, sculpted symbols I’d made of my past and of my hopes, I decided they held even more power as sealed forms with inaccessible interiors.”

York says when it works, she loves putting together group shows where the artists reflect like-mindedness in style or thought process. She says she had been keeping her eye out for someone to add when she saw Pointer-Jia’s work, and remembered Joe Molinaro’s from showing some pieces in the past.

“Judith describes her small house forms as reliquaries, and Joe’s combine his Catholic upbringing with his studies in the Amazon of indigenous tribes and their pottery. Patricia came up with the title ‘Soul Boxes’ which so perfectly captures the introspective intent of each of the artists,” York says.

Pointer-Jia further describes her work: “Measuring marks and scars from the construction process are purposely left in the clay as evidence of their development.  Mismatched edges, opening seams and layers of thinly applied ceramic stains, slips and glazes divulge an unexpected complexity and beauty.  Character and grace can be found in alleged imperfections.  These forms are reliquaries of a sort, symbolizing perseverance and protecting a mystery within.”

Aside from being with Centre College since 1998, Judith Pointer-Jia received the Kirk Teaching Excellence Award in 2016. Joe Molinaro has been a ceramic artist and professor of art at EKU since 1989 and written numerous articles and books recording 25 years of research in the Amazon. Author and international instructor Patricia Baldwin-Seggebruch is known world-wide for her teaching and impact in the medium of encaustic.  All have received numerous awards and grants for their innovative work and dedication to their craft. 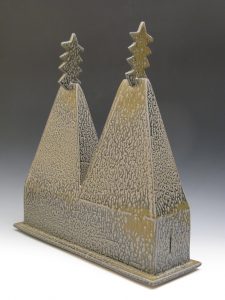 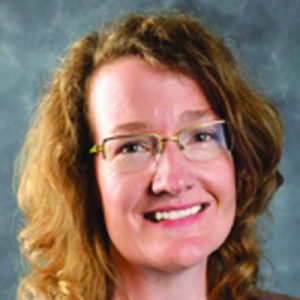