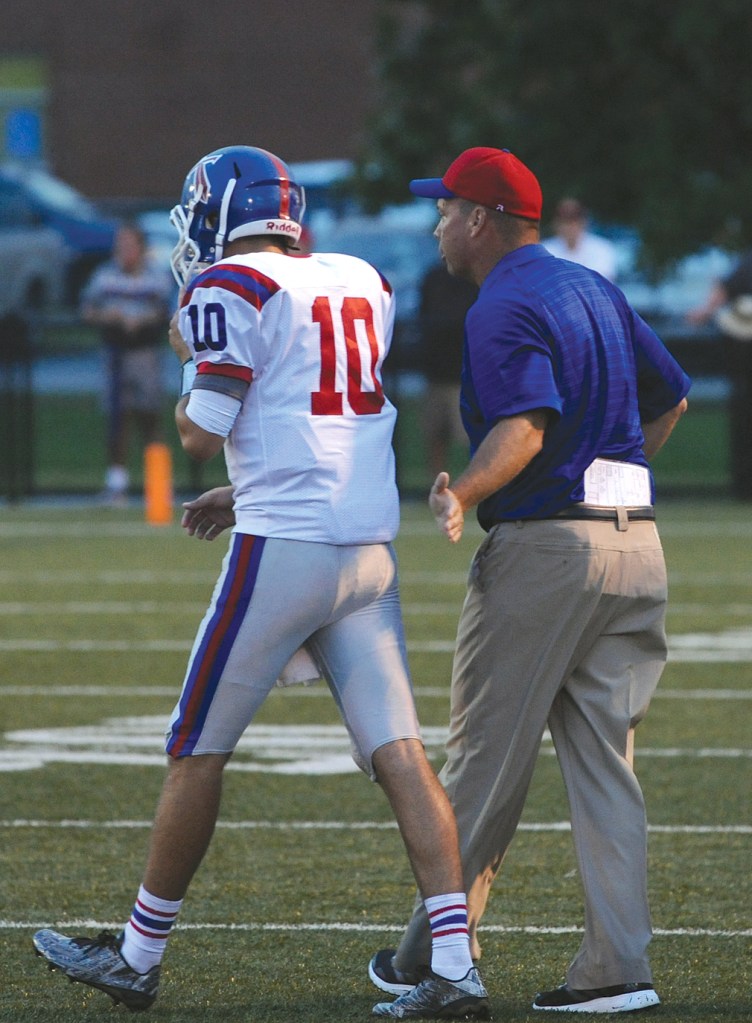 Matt Overing/matthew.overing@amnews.com Mercer County football coach David Buchanan, right, walks quarterback Gunnar Gillis onto the field during a game last season. Buchanan said it was important to get as many reps between Gillis and receiver Trevon Faulkner as they could during spring practices.

For most football teams around the area, recently finished spring practices weren’t a time to install new packages or roll out new schemes. Most kept it simple and used the time to get kids back in pads and focus on fundamentals and base packages.

“We won’t get to wear full gear again until the first of August, so I think it’s imperative to focus on blocking and tackling,” Casey County coach Steve Stonebreaker said. “We don’t focus a great deal on schemes as we just try to improve in our base packages and introduce our new players to our practice culture.”

But for a couple of teams, eyes were on skill positions, although for different reasons. At Mercer County, coach David Buchanan tried to get as many reps between returning starters quarterback Gunnar Gillis and receiver Trevon Faulkner as he could, knowing both will be busy with other sports in the summer.

“We tried to get as many live reps as we possibly could in pads,” Buchanan said. “We also used it as a time to get Trevon and Gunnar a lot of reps throwing together, since they will have very busy summers. We had to fight through some really cold practices, but in the long run I think that was good for us to help us become a little bit tougher. Overall, I was very pleased with our spring.”

For Clay Clevenger, getting a handle on the quarterback position is imperative this season as Danville loses All-State quarterback Zach Dampier to graduation. While there’s still plenty of time to figure out who Dampier’s heir will be, the Ads worked on other areas of the offense to help support a new starting QB.

“We’re still going to be a shotgun, spread team, but there are a lot of teams doing that and running out of it,” Clevenger said. “Our breads going to be buttered, early in the season especially, with having a good running game and defense with the guys we have coming back.”

The Ads will return all five starting offensive linemen and running back Don Harris, who ran over, around and through opponents for 1,290 yards and 19 touchdowns as Danville advanced to the Class 2A state championship game.

“The offensive line was under fire a little last year as sophomores, now they’re juniors and had as good of an offseason as anybody,” Clevenger said. “They’ve really changed their bodies, gotten a lot stronger, which is what you want if you have to pound the football.”

Across town at Boyle County, the Rebels were focused on many of the same things as their peers in the area.

But with the tradition and expectations at Boyle, there’s always something extra for the Rebels to consider. They haven’t made it past the second round of the playoffs in three of the last four seasons and haven’t made a state championship game since their last title in 2010, something that’s unacceptable for coach Chuck Smith, who said the recent failures served as motivation through the winter and spring.

“If it didn’t then our program is going in the wrong direction,” he said. “We did not end the season the way it needed to be. We didn’t have a good season at all in my opinion. When we went into the big games, we didn’t compete the way Boyle County needs to compete.

“These seniors-to-be understand that, they know what’s in front of them, they know the challenges. It’s not going to be easy. There’s great competition in our class, in our district, in our region, and it’s a big challenge.”

So in addition to reps, Smith was looking to add depth to the roster and leadership to his senior class, which should include at least 20 players.

The good news for the Rebels is they appear to be strong at all the right positions, with returning starters dotting the lineup, including lineman Will Bramel, who’s being heavily recruited by Division I colleges across the country.

Smith said the Rebels will have 80 to 85 players on their roster this year. While the Ads won’t approach those numbers, Clevenger was happy to see 25 to 30 kids out for spring practices, the best numbers he seen since taking over at his alma mater in 2013.

“Those are pretty good numbers for us,” Clevenger said. “We were able to get them out on the football field, move them around, work on some fundamental stuff. We looked at the quarterback situations, too.

“We had a good offseason as far as January through spring break, and then we came from spring break and got all 10 of our practices in. We were able to improve a little bit.”

Leahey, Nolan use friendship off tennis court to succeed…