‘Only one good choice’ for downtown fire station: build a new one 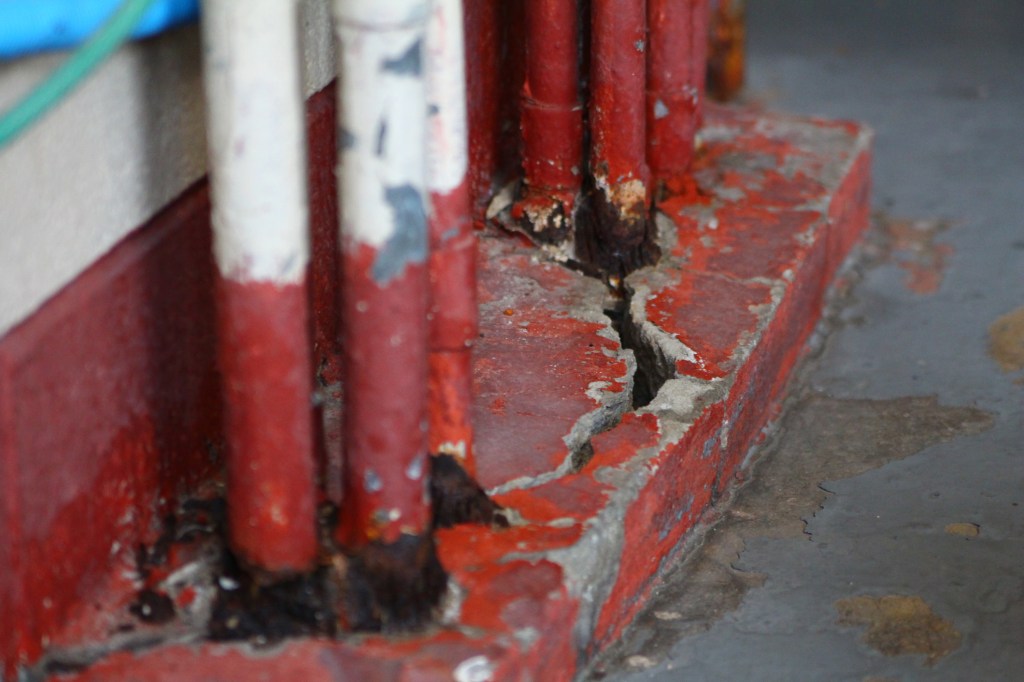 Corrosion is threatening to expose electrical wiring inside the station’s bay.

Danville officials already knew something needed to be done about the Central Fire Station on Main Street. But it wasn’t totally clear just how bad the building’s condition was until a city commission meeting Thursday night. That’s when a quartet of engineers presented a 130-page study documenting extensive structural and design problems with the 50-plus-year-old station.

“Frankly, I’m kind of embarrassed” by the condition of the building, Mayor Mike Perros said.

Perhaps the most alarming of the problems was explained by structural engineer David Ahnquist. 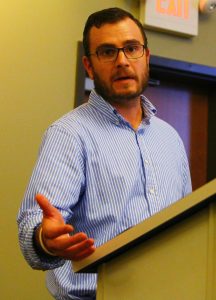 “The back wall — and the front wall, for that matter — are not structurally attached to the second floor, and it’s pulling away from the main structure,” Ahnquist told city commissioners. “The biggest problem is you have to attach the front and rear walls to the building. That’s a very big concern of mine. I don’t know how long they’re going to stay the way they are.”

Ahnquist and three other engineers working with the Bravura Corporation, which is being paid $27,400 by Danville to develop a plan for the fire station, visited the station on March 15 to assess its condition.

All four came away with the same conclusion as Ahnquist reached due to the instability of the outer walls:

“I think that repairing these problems will be incredibly expensive and time-consuming for a building that, quite frankly, has outlasted its usefulness,” he said. “I think reinforcing the walls would be more expensive than building new ones. Due to all that, in my opinion, the best option for the city is rebuilding and not trying to use this one at all.” 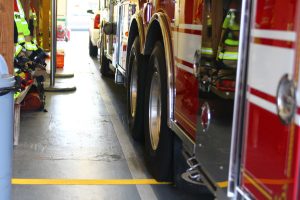 Vehicles cannot park beyond a bright yellow line in the station’s bay, because a portion of the floor is not structurally sound enough to support fire trucks.

Other issues identified by the engineers include:

• the building has no sprinkler system;

• there is no designated space for decontamination — a standard need for modern fire stations;

• there may not be enough emergency exits from the basement or second floor;

• there is a lack of insulation in the walls and weatherstripping around doors and windows;

• there are multiple cracks in the walls that may be due to the building settling unevenly;

• according to mechanical engineer Nick Morgan, the building’s HVAC units are “rated for mobile home use, so they’re not even of a commercial grade or even a light residential grade;” 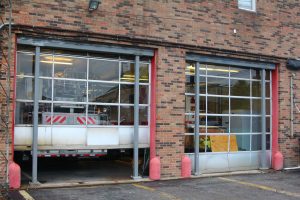 • the building is out of code for the Americans with Disabilities Act, earthquake building codes, National Fire Protection Association codes and modern energy standards.

“If you were to build a new building, this building clearly would be out of compliance,” said engineer Dave Newman. “… This building was built long before ADA was in effect, so it is in effect exempt from those requirements, but if we start doing major remodeling inside, then you would be required to meet those standards.” 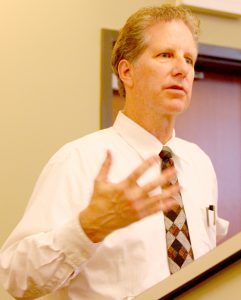 Newman said the same would be true for other codes and standards.

“If we start to make major modifications — let’s say we totally gut the first and second floors and start over and rebuild all the rooms, put in new systems — what that does is it triggers compliance with all these other codes I mentioned, most significant(ly), the seismic upgrades,” he said. “Although we haven’t quantified it yet, most likely the seismic upgrades alone would probably be close to the cost of new construction.”

Newman’s conclusion: “It seemed more prudent to look toward a new building.”

The engineers did note that the roof, which has been replaced, is not in bad condition, though it’s unknown what exactly the new roof panels are made of and they may not be up to code. And mechanical engineer Morgan noted that the building’s heaters “worked very well” to keep the bay warm.

“They probably worked overtime, though, just due to the cracks in the building and the lack of a good seal on the overhead doors in the vehicle bays,” Morgan added.

When the presentation ended, Mayor Perros had the first question:

“Other than the heaters in the first floor, is there anything good about this building?” 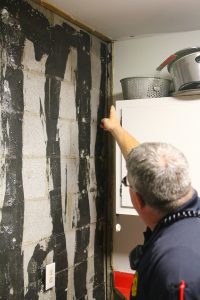 Battalion Chief Michael Mulholland points to a spot where it’s visible that the back wall of the station has come apart from the building.

“The guys inside are good,” Newman responded. “They’ve made the best out of a tough situation.”

“With all you’ve said, is there any imminent danger here?” Perros followed up.

“That is a concern,” Newman said. “Without more destructive-type testing where we actually go in and take some serious measurements and do some calculations, we couldn’t tell yet how soon there might be failure of those walls.”

“I proposed a solution that was going to be ugly just to stabilize it,” Ahnquist added. “That was not implemented. I honestly couldn’t tell you (if there is imminent danger).”

City Engineer Earl Coffey said the severity of the report from Bravura was what triggered Thursday’s special called meeting.

“The most critical thing at the commission level, what we felt like it was important to publicize to you guys, is that we really feel like some of your options are probably gone at this point, economically,” Coffey told commissioners. “They just don’t make financial sense. … But we’ll continue to go through the exercise and go through the reporting process.” 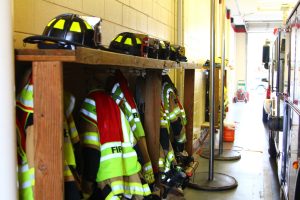 Firefighter gear lines a wall of the Central Fire Station’s bay. The station has no designated decontamination area for gear after firefighters return from a call.

Bravura was hired to help Danville choose from three options for the fire station:

• renovation of the existing structure;

• construction of an addition onto the existing structure; or

“I’m not sure it’s necessary, in my estimation, to go through much more analysis,” Perros said. “Is there anybody here that thinks, based on what we’ve heard, that there’s any economic sense in trying to renovate? I haven’t heard from any of those four gentlemen that that makes any economic sense at all. … We still have a situation here that, in my estimation, gives you only one good choice.”

Multiple commissioners agreed with Perros that a new fire station seems like the only reasonable option. 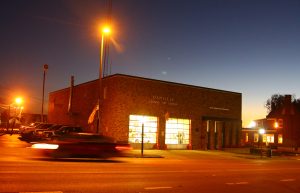 File photo
A car passes by the Danville Central Fire Station along Main Street just after sunset in the fall of 2016.

If the city does decide to build a new station, the question becomes whether it can build in the same or an adjacent location along Main Street, near the Fourth Street intersection; or if a new location will be needed.

Thursday night, city officials and the consulting engineers with Bravura stated support for keeping the station in the same area of town. 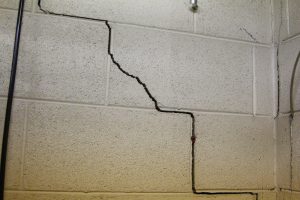 A large crack runs through the block wall of the station.

Newman said the lot on the southwest corner of Fourth and Main, which is currently a bank parking lot, has a lot of potential in his mind. While the other three corners of the intersection have impressive buildings and public spaces, the parking lot doesn’t provide the same level of cultural significance.

“As an architect, I would encourage everybody to think about turning this corner back to the public and rebuilding the fire station may be the perfect way to do that,” he said. “This could be a perfect opportunity to create another public space there, associated with and directly linked to the fire station.”

Commissioners Kevin Caudill and J.H. Atkins said they like the idea of keeping the station downtown. Danville Fire Chief Ken Pflug said the station is currently in the prime location for response times, which helps the city’s ISO ratings, which keep insurance premiums low.

To build in the same area, however, will mean assessing the city’s options with its “neighbors,” the businesses and property owners that surround the station’s current location, Coffey said. City staff and Bravura could likely do some more work in pursuit of a plan to build new, talk with surrounding property owners and come back to the city commission with more to discuss within 30 days, he said.

Pflug said there have been issues with the current building for decades.

“I became a part-time firefighter in 1988 and even then, it had issues,” he said.

Pflug said he supports the idea of a new fire station because “this building no longer meets the functionality of a new, modern fire station.”

“We knew that when the bay doors rolled up, the floor bounced — you could feel it,” he said. “The big building makes noises. Over the years, you just get used to it. We knew it was a problem and it was getting worse. The professionals here today proved our thoughts true.”

Pflug said the addition of a decontamination area would be extremely beneficial. Currently, there is no designated area for firefighters to clean up in after returning from a run. He also has a “somewhat selfish” dream for something to include with a new station: a first-responders memorial. The lot at the corner of Fourth and Main would be “perfect” for that, he said.

“I like the idea of keeping the location. I like it on Main Street. I like it in the evenings when people are walking and they stop by — it’s their building, too,” he said. “It gives us a chance to talk to people about what we do. It’s pretty busy during the warmer months and it’s nice — that small-town feel.” 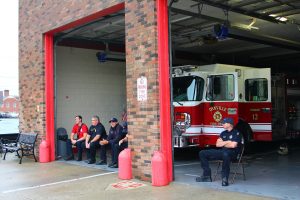