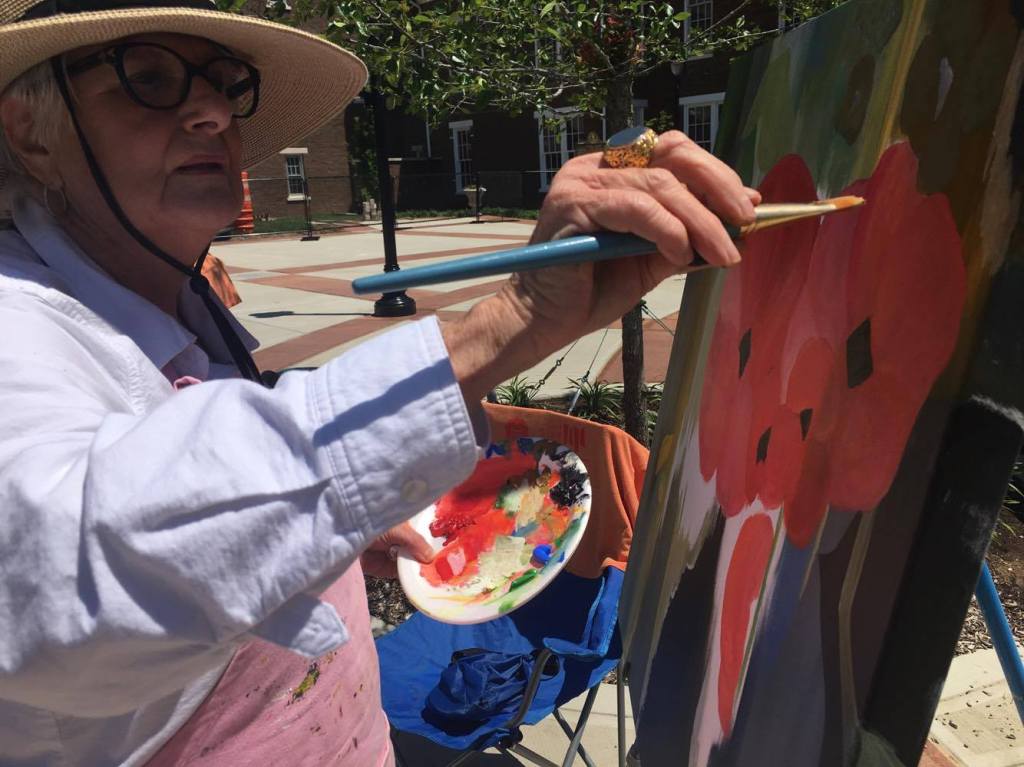 By BOBBIE CURD and KENDRA PEEK

The first ever Art-A-Thon to benefit the Community Arts Center was held downtown Saturday, and it exceed fundraising expectations.

About $15,000 was raised to benefit the Community Arts Center — almost $5,000 more than the goal of $10,000. The money was raised from donations to artists and corporate sponsorships.

“What a big difference that can make — a huge difference that amount of money can make,” said Kate Snyder, associate director of marketing and development, on Saturday afternoon.

Snyder said she hadn’t been sure what to expect since it was the first year, but she was happy with the turnout.

“I think it’s going great. I was pleased at the number of people. The artists are having a great time,” she said. “People are surprised at the range of artists active in Danville.”

Artists from all walks of life and multiple mediums converged onto Weisiger Park and inside the arts center for the event, creating pieces throughout the day and giving demonstrations of their chosen art forms.

Each artist raised money beforehand by creating their own “portals” though the arts center’s website; and they took contributions on site Saturday. All funds will go back to arts center in order to support its educational programs.

“You know the Arts Center has helped me developed my talent, so most definitely yes — I want to participate in any way I can to give back,” painter Sarah Wilts said. She began painting 20 or so years ago, but got serious only three years back. With so many classes offered throughout the year at the arts center, she said it’s been convenient for her to refocus on her love of painting and hone her skill.

Wiltsee, a past president of the Garden Club of Danville who’s known for her incredibly green thumb, was creating a colorful picture of flowers in bloom.

“Sister” Roni Gilpin chose to create a community glass tile mosaic piece, getting visitors at her table to glue brightly colored pieces of glass onto one background. She said collaboration is important in art and can bring communities together.

Artist Katherine Thomsen, who is credited as the brainchild of the Art-A-Thon and also teaches ceramics at the arts center, was creating a ceramic globe that would eventually turn into a luminary that holds a candle. Thomsen said the foot traffic throughout the park was steady all morning long.

Amelia Cloud, 13, a Bate Middle School student, had a drawing table set up and was perfecting a Manga-inspired character. She said she loves to draw and some day hopes to work for a company like Disney, doing animation.

Tressa Brown, a Harrodsburg resident, came with her son, Jacob, to do traditional American Indian beadwork. She said they wanted to show people something they might not ordinarily see and support the arts center.

“Programs the arts center provides are really important,” she said. “We need to make sure everyone has access to these programs.”

Collage artist John Andrew Dixon placed materials on his piece “To peach is owed,” which he was completing for the Art-Full Affair event scheduled for next weekend.

Dixon said he was surprised at how many people had come through, and how many were asking questions about the process.

Snyder said the 20 or so volunteers who ran the event made it all possible.

“They have been awesome,” she said.

Jewelry maker Debbie Sears said she wanted to give back because she had been able to take a pottery class on a scholarship at the arts center.

“I wanted to pay it forward,” she said.

Sears was selling her jewelry as she made it and the proceeds were going to the arts center.

That’s the whole point of the day, Snyder said — funding from Saturday’s event is going to help provide scholarships to events and programs offered at the arts center, including free field trips to students. Snyder said it takes $6 to fund a free field trip for a child; $28 for preschool art programming for a family; and $50 for a partial scholarship to Arts Exploration Camp.

Charlotta Bright Norby was quilting to support the arts center during the event.

“I think art is important,” she said. “I want all kids to have the opportunity — even kids whose families can’t afford to pay.” 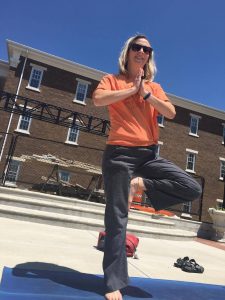 Francine Noe Southerland held a yoga demonstration early afternoon on Saturday. “I know people who have come to my class, who work out hardcore, and say they had no idea how much strength yoga takes.” To Southerland, yoga is definitely an art form because of how it not only strengthens bodies, but can clear minds. 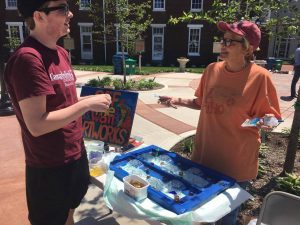 Jonah Cline, left, visits “Sister” Roni Gilpin’s art table in Weisiger Park Saturday. Gilpin was creating a community art project (below) where visitors helped her design a glass tile mosaic. Gilpin chose the mosaic project because multiple people could lend their creativity to it — art can pull a community together, she said. 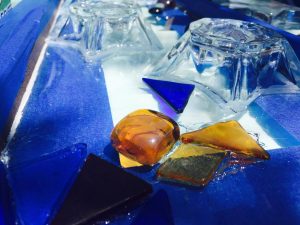 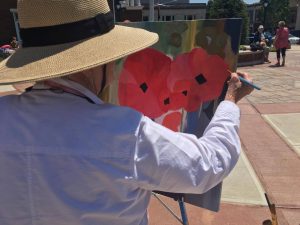 Sarah Wiltsee creates a painting on the spot in Weisiger Park Saturday. 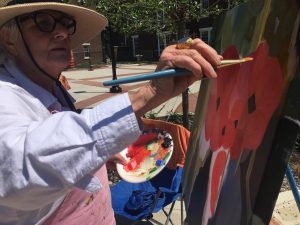 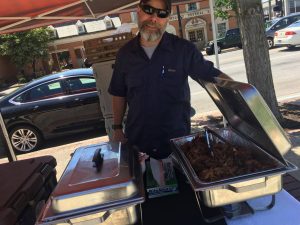 Steve Southerland, owner of Brothers’ BBQ, brought his own art speciality to Weisiger Saturday, which was for sale: baked beans with peaches, coleslaw and pulled pork barbecue. 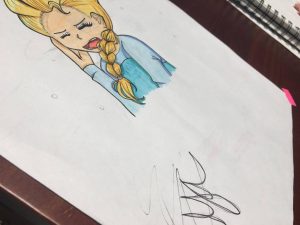 A drawing by Amelia Cloud, 13. Cloud was part of the Art-A-Thon Saturday, drawing at a table in the park and sharing with visitors how she creates illustrations by hand. “My dream would be to work for Disney when I get older, and do animation. Some day I’d like to fly off to Japan to study and work there. I want to see the world, and I think art can help me do that.” 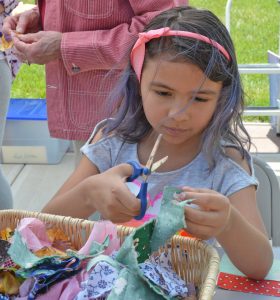 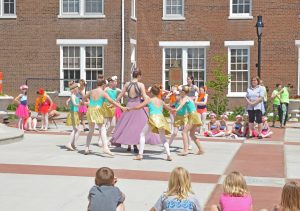 Kendra Peek/kendra.peek@amnews.com
Dancers from the Danville Dance Company perform during the first-ever Art-A-Thon, to benefit the Community Arts Center. 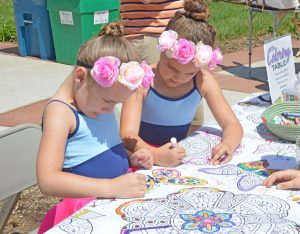 Kendra Peek/kendra.peek@amnews.com
Izzy Devine, 7, and Josie Anderson, 6, with the Danville Dance Academy color at The Coloring Table during the Community Arts Center Art-A-Thon. 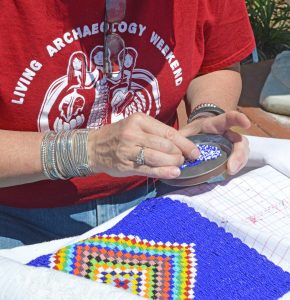 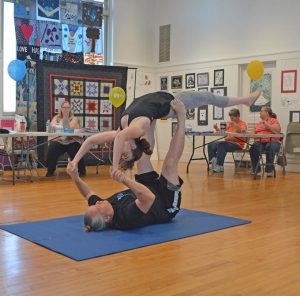 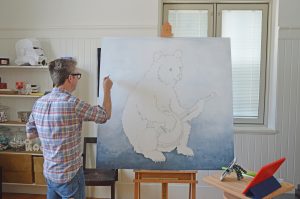 Kendra Peek/kendra.peek@amnews.com
Mark Wilhelm, artist in residence at the Community Arts Center, paints during the Art-A-Thon. 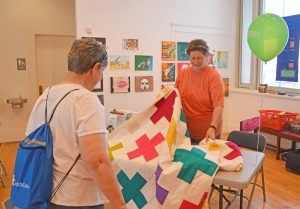 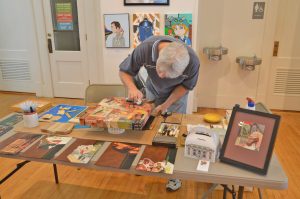 Kendra Peek/kendra.peek@amnews.com
John Andrew Dixon works on “To peach is owed,” a mixed-media collage piece for the Art-Full Affair, during the 2017 Community Arts Center’s Art-A-Thon.

Danville senior, an actor since she was 6, heading…