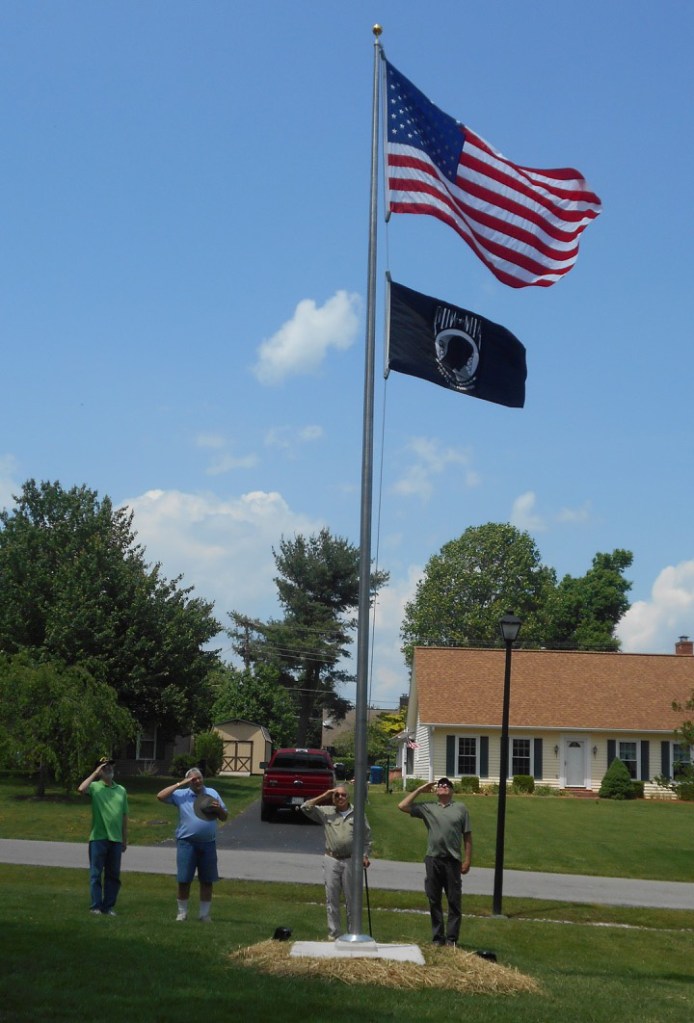 Veterans salute new flags raised May 10 to honor veterans at the home of Danny L. Bryant on Cardinal Drive.

A new American flag and a flag to honor prisoners of war and those missing in action waved in the bright sunshine Wednesday, as four military veterans stood at attention at Danny Bryant’s residence on Cardinal Drive.Three branches of the military — Army, Air Force and Navy — were represented. 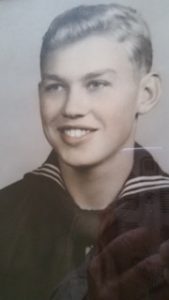 Bryant, a Vietnam War Army veteran, placed a tall flag pole in his yard as a tribute to his father-in-law, Ken Moulton, a retired Navy veteran, and to all veterans who served their country.

His neighbor, Jim Gramstad donated a 4-by-6-foot American flag and Bryant added the black and white POW-MIA flag to honor a cousin, Samuel Hewitt, who went missing in 1966 while on night patrol near Da Dang. Hewitt’s remains were found in 2010 and returned to the United States for burial.

While the flags were being raised for the first time, each veteran remembered the numbers on their dog tags. In 1969, the number system ended and soldiers used their Social Security numbers for identification.

Bryant had been planning Wednesday’s event for many years. After he got a push from Ken, he got busy installing the tall pole and adding solar lighting to keep the flags showing at night.

“Ken said he’d come for a visit if I’d put up the flag pole,” Bryant said.

Bryant decided it was time to install it and dedicate it to Ken.

More than 50 family members, friends and neighbors, ranging in ages from one week to several retirees, gathered for the ceremonies. 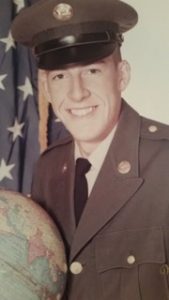 Bryant volunteered for the Army draft in September 1968. After basic training at Fort Knox and advanced individual training at Fort Sill, Oklahoma, he was deployed in January 1969 to the Vietnam war zone where he was in combat and helped with the evacuation of military or other casualties to the hospital in a helicopter or airplane. He also drove a tank.

“The fire base we were in fired for a month where many soldiers were dead or wounded and shipped back to the States.”

It was a month of non-stop sniper fire and mortar rounds coming at the troops, said Bryant, who was among those wounded during firing on Hamburger Hill. He was shipped out to Japan and then returned to Fort Knox.

He finished his two-year stint as a guard for the federal detain for soldiers returning home from Vietnam. He mustered out and returned home in 1970.

Danny and his wife Gail were high school sweethearts before he was drafted. They kept in touch after her family moved to Florida while he was in Vietnam. When he got out, he went to Florida, where he and Gail were married June 21, 1971. They returned to Kentucky for six years, then headed back south.

They returned later and have lived in Danville for the past 40 years. He retired from Texas Eastern Transmission.

“ We still go back to Florida for family visits,” he said.

Ken joined the Navy when he was 17 years old, and served as a Chief Petty Officer for 24 years. As soon as he left basic training, he and his wife, Altea, were married.

After basic training at Great Lakes Naval Base in Illinois, Moulton got more training in radio in Memphis, attended gunnery school in Florida, and went to Naval Aviation School in California.

He also served in the Southwestern Pacific, New Guinea and the Philippines.

He was in service on the USS Truban, the Destroyer Witek and the USS Kitty Hawk, a carrier out of San Diego, California. He was also on shore duty in Panama and Hawaii.

A native of Illinois, Moulton ended his career after he came to Danville to provide training in the local Naval Reserve headquarters.

After Ken retired, he and his wife, Altea, moved to Florida where he lives near his daughter, Debbie, and her family.

In the Korean DMZ 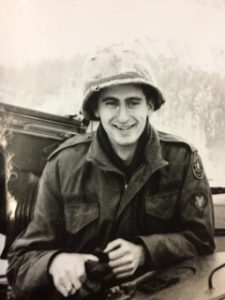 Michael Wayne Simpson, Danny’s cousin, served from 1968 to 1972 in the Army. He was in Germany 15 months, Korea for 13 months and spent a month in Fort Belvoir, Virginia. He ended his career at Fort Hood, Texas. He was a sergeant when he left the service.

In Korea, he escorted conveys in and out of the are and guarded the DMZ border “during a cease fire” period between North Korea and South Korea. He said 65 people were killed in the 13 months he was there.

After he returned home, Simpson worked at several jobs and retired from Norfolk Southern Railway.

In charge of processing 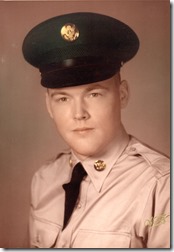 “My job was discharging people from the Army after their tour was over. I also handled officer discharges and regular personnel discharge,” he said.

At that time, a military buildup was taking place due to the Vietnam War and the federal government was hiring civilians to replace military personnel station at Fort Knox.

Art expected to be sent overseas and he trained his future wife, Linda, who was hired to replace him. But he was not sent to Vietnam; he served his remaining time at the Kentucky base.

The couple was married after his discharge. They dated in a car he still has in his garage.

They have lived in Danville for 30 years. He was an engineer for Whirlpool and Panasonic and retired after working at Penn Ventilator. 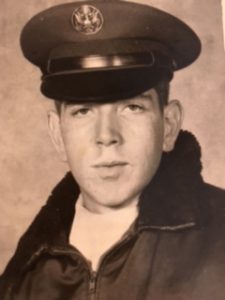 Jim Gramstad, a native of New York, is a retired Air Force veteran.

He was unable to attend the ceremony because he was working for Corning Glass in South Korea. His wife, Judy, represented him at the ceremony.

He currently works for Corning. 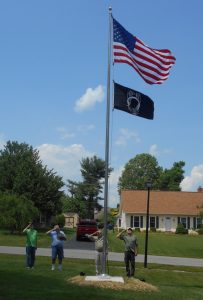 Veterans salute new flags raised May 10 to honor veterans at the home of Danny L. Bryant on Cardinal Drive. 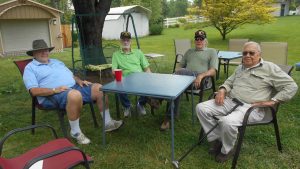 Ken Moulton, right, was honored May 10 to have a flag pole placed to recognize his military service. Talking about their military experiences, from left, are Art Schlachter, Michael W. Simpson and Danny L. Bryant.