Danville senior, an actor since she was 6, heading to theater college in England 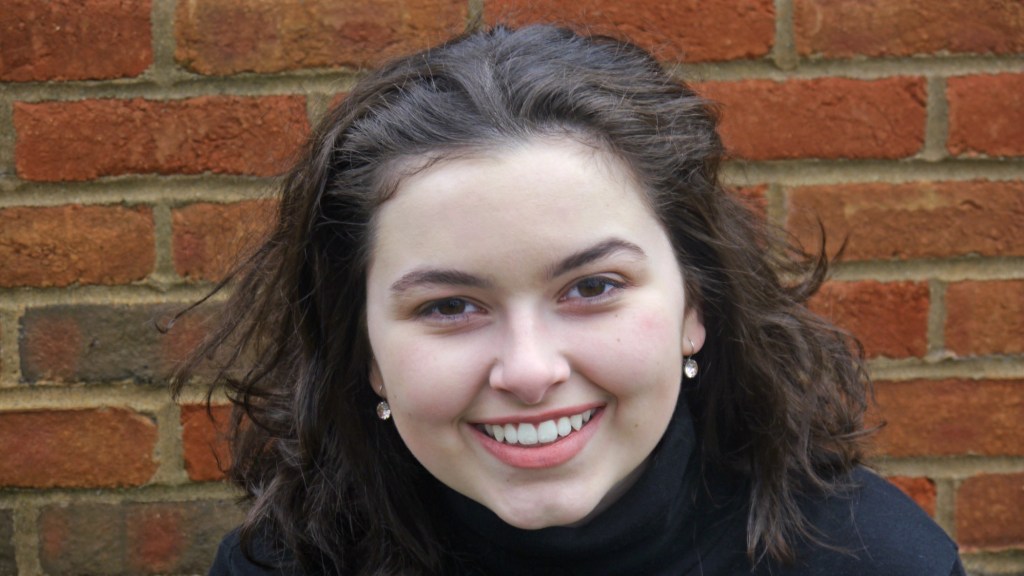 Photo submitted Grace Binford Sheene will be attending college at Rose Bruford College, in Sidcup, England, to study actor musicianship. She is hosting a fundraising show as a final performance at West T. Hill, where she started acting at the age of 6.

The world’s a stage

Grace Sheene was 6 years old when she first took the stage at West T. Hill, as Molly in Annie — but her performance almost didn’t happen.

“I remember not wanting to audition for it. I thought, ‘I don’t want to do that … I like to be by myself when I’m making music; that’s not something I need to do,’” she said. “I guess maybe I did want to deep down.”

Sheene agreed to try out and was glad she did.

“I just fell in love with it.”

She said she thinks the hesitation wasn’t so much fear or nerves, but that she liked being alone.

“As a young child, being the center of attention wasn’t something that appealed to me,” she said. “That changed soon after realizing the kind of reaction you can get when you do something funny on stage or when you sing a song. I loved it.”

“This was the best part — I was thrilled because we choreographed this bit in ‘Hard Knock Life’ where I got to pretend to be drunk and I just thought it was the funniest thing,” she said. “I looked up to Carol Burnett so much. I thought, this is my time to do my impression of her as Miss Hannigan.

“I flipped into a laundry hamper and everyone piled the sheets on me. It always got the biggest laugh. I thought it was great. I loved that.”

It was that first play, she said, that made the biggest impact and remains one of her favorite performances to date.

“I attribute a lot of what really made me love acting and love theatre to West T. Hill Community Theatre and to Karen Logue,” she said. “She took a chance on me at six years old.”

Sheen, now a senior at Danville High School, has continued to appear on stages ever since. This fall, she’s leaving Danville for Rose Bruford College in England.

Going to London is something Sheene has long wanted to do.

Rose Buford College of Theatre and Performance is in Sidcup, England, a suburb of London, and about 20 minutes to the city center, Sheene said.

“It’s the best of both worlds, I think,” she said. “I love huge cities, but it’s definitely made my parents a little more at ease than they would be if I were staying in Central London.”

When she goes to move in, it will be her first visit to the campus. Her parents and her brother will go with her, all seeing the campus for the first time.

“Everyone’s always said, ‘You have to choose; you’re not going to be good at either one of them if you continue doing both.’ And there aren’t any courses like that in America. When I found out about this one, I was like, ‘Yes, I can — I can do both,’” she said.

Sheene auditioned using monologues and pieces on the piano, guitar and ukulele.

“That was interesting,” she said.

The degree consists of training in acting, which Sheene called “very intensive.”

“It’s something like eight hours of instruction a day. Then there’s rehearsals on top of that,” she said. “In addition to all of the acting stuff is music rehearsals and learning how to put your musical skills into play as a performing artist.”

This isn’t her first time out of the United States. Most recently, in 2015, Sheene participated in a Sister Cities Artist Exchange with Carrickfergus, spending about a month there.

“I stayed with a really lovely family there. I absolutely loved it over there,” she said. “It was a very unique experience — a great place to spend time, not just as a tourist, but kind of living like a local. It was a very good experience.”

In addition to performing at West T. Hill, Sheene has also performed at Ragged Edge, and has performed regularly with the Danville High School drama department.

She’s also a member of the school’s forensics team. This year, Sheene was the state champion in prose, for which she performed using a piece from Sophie’s Choice. She also competed in dramatic interpretation.

She and her teammates will be going to two national tournaments to compete.

Sheene said she thinks she’s been in 25-30 plays, had more than four film roles and acted in a few commercials.

One of the most recent plays she’s been in was at Danville High School. Titled, ‘Too Much Light Makes the Baby Go Blind,” Sheene said the play was a collection of 30 tiny plays in 60 minutes.

Another one of her favorites has been ‘Something’s Afoot,’ a murder mystery, performed at Danville High School.

She said there’s something about acting that’s hard to explain.

“I feel so much like myself when I’m pretending to be someone else,” she said. “… It’s so hard to describe with words. It’s such a weird adrenaline experience.”

Getting inside the mind of another person, figuring out what makes them think is a part of the allure, Sheene said.

“Being someone else is such an intriguing thing to me. I think that’s maybe why I like it so much,” she said. “I love exploring other people’s thoughts, ideas and stories. I love telling stories.”

On Aug. 5, Sheene will take the stage at West T. Hill for the last time before leaving for England. It’s a fundraising performance by the 17-year-old to help cover the costs of studying overseas.

“I’m going to do a variety of things. I want to give the community and friends and family the opportunity to see what I’m going to be doing next year,” Sheene said.

The show will feature original music and some acting pieces, such as the monologues she used to get into Rose Bruford, among other things.

“I feel like I’ve had a lot of people follow me as I’ve gotten older, done things in the community, and given me such wonderful support,” she said. “It’s a nice way to do a performance, to have a conclusive thing for this chapter.”

Sheen said it’s also a way to have one last performance in the place that got her started before she crosses the Atlantic — though she said it won’t be her last time performing in Danville.

Donations will be accepted, but the performance is entirely free.

“I will thank them and give them a very big hug,” Sheene said.

Sheene said she doesn’t know what she will end up doing after college, but knows she wants to continue acting and playing music.

“What’s great about the degree I’m doing is that it’s quite versatile compared to just an acting degree or even a musical theater degree,” she said. “We’re training in acting, radio, television, film and theatre. And with the musicianship, I’m doing classical music training, contemporary music training, and music arranging — so writing and orchestrating it for groups of musicians.”

That leaves her career options wide open, she said.

“I could be an actor. I could be in a traveling company. Or I could get a job at a local theater. I could have a job as a teacher of some sort,” she said. “… If some door opens to do some performance work as a musician, I would be open to that. I would love that so much. The opportunities are quite endless, so I’m really just open to what presents itself to me.”

Of course, no matter what, she wants to be on stage.

“I really like contemporary theater. not necessarily neo-futurist or anything. I like the idea of being innovative with art and theatre,” she said. “I think it would be so great to pioneer a new play and be the first to play a character. I guess the goal is to be in a play in the West End or Broadway or something like that. I definitely want to keep playing music.”

Grace Binford Sheene’s farewell performance will be 7 p.m. Aug. 5 at West T. Hill Community Theatre. The event is free to the public, but donations are accepted. In the meantime, anyone looking to contact her for a performing opportunity can email binfordgrace@gmail.com. 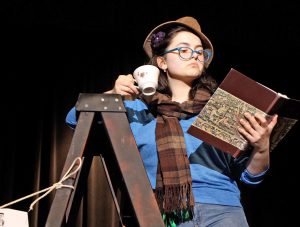 Photo submitted
Grace Binford Sheene performing in the most recent play at Danville High School. She will be attending college at Rose Bruford College, in Sidcup, England, to study actor musicianship. She is hosting a fundraising show as a final performance at West T. Hill, where she started acting at the age of 6. 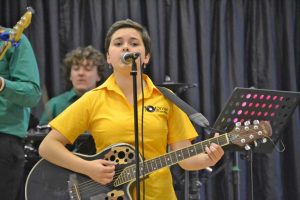 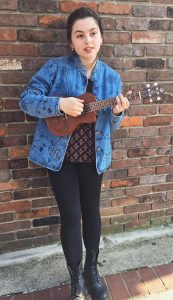 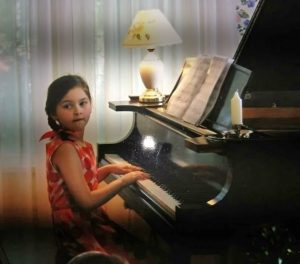 Landmark Trust hopes to save historic properties with revolving fund