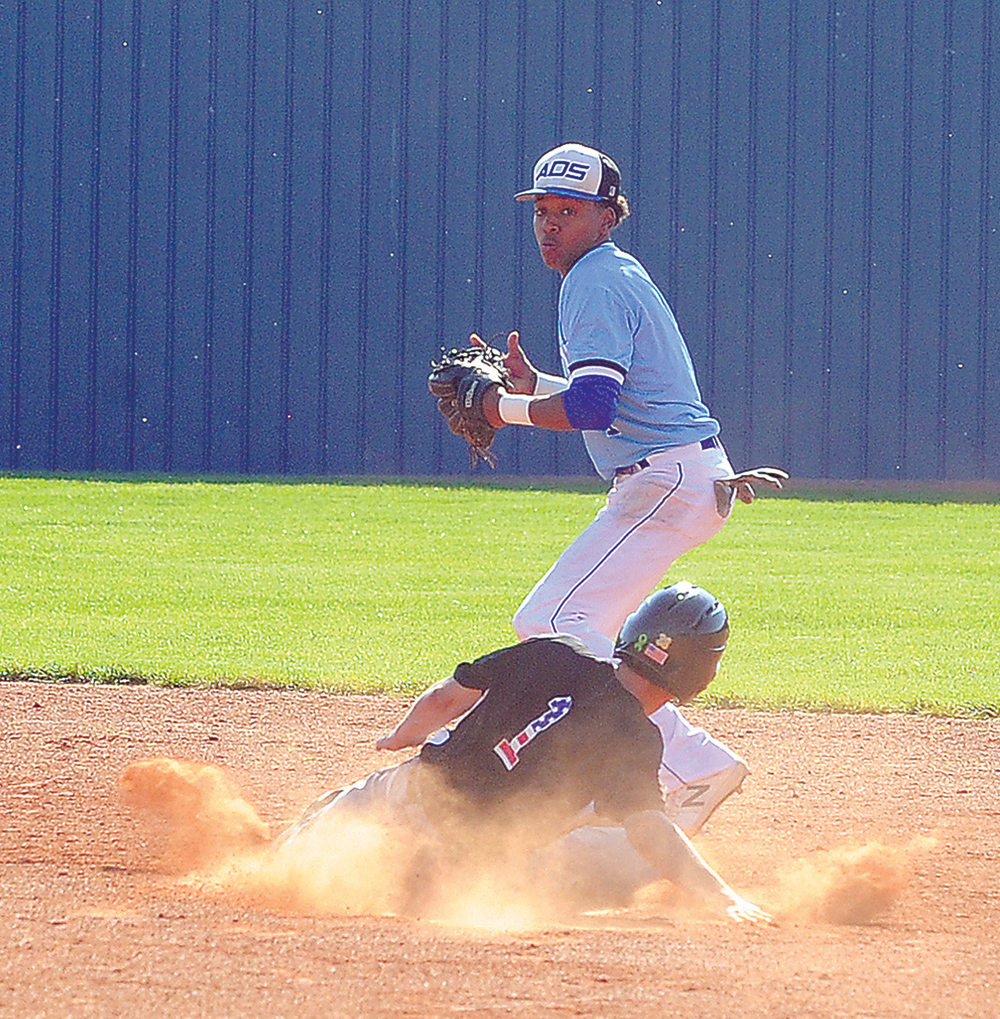 Matt Overing/matthew.overing@amnews.com Brennan Washington of Danville gets the force out at second base on Boyle County's Matthew Bodner in Monday's game.

It wasn’t the start anyone expected, but it certainly was the result Danville was looking for.

The Admirals hosted their crosstown rival Boyle County in the final 45th District regular season game of the baseball season Monday, posting a 9-8 win and spoiling the Rebels chance at an undefeated run through the district.

The two schools combined for 11 runs in the first inning, with Danville holding a 6-5 lead.

“I don’t think either one of us saw that coming,” Danville coach Paul Morse said. “The zone was really tight the first couple of innings and it took some time for both pitchers to adjust. … Lot of nerves going as well. It’s a big game, so that played a little part of it, too.”

After the Rebels took a 5-0 lead in the top half of the inning, Morse pulled his players together and referred to last week’s 15-14 win over Garrard County when the Golden Lions posted four runs in the top of the first.

“I said, ‘Guys we can’t play much worse than we did in that first inning,” Morse said. “We’re down 5-0, but we were down 4-0 to Garrard last week after the first inning in that game. Just relax and go out and finish strong, and that’s what they did.”

“He threw really well for us at the beginning of the season, then he had a couple tough outings in the middle, but he’s throwing really well again,” Morse said of Dampier. “He’s a kid that comes in and throws strikes, throws a couple different pitches. If you play defense behind him, he’s going to do good things for you.”

Boyle coach Kyle Wynn isn’t pushing the panic button on a pitching staff that’s been solid throughout the year. Tuesday’s loss was only the seventh time in 30 games the Rebels have allowed nine or more runs.

“Hopefully it’s just a speed bump,” Wynn said. “Hopefully we can get over that and get ready for districts. Got to be a short memory for those guys.”

The win moved Danville to 17-13 overall and 5-1 in the district. The Ads have won four of their last five games heading into tonight’s game against Casey County.

Meanwhile, Boyle fell to 21-9 and 5-1 in the district. However, the Rebels still clinch the top seed in next week’s district tournament, leading to some conflicted feeling for Wynn.

“It’s a weird feeling, it’s a frustrating feeling,” Wynn said. “I thought we had a chance to win this game, sweep the district and take it outright. It stings a little bit. … We’re still No. 1 seed, but we didn’t play our best tonight.”

Obviously, neither coach had many complaints about their offensive output in Monday’s game. The Ads totaled nine hits and drew 11 walks, with Mason Schroeder, Ellison Stanfield and McCallum Morley all getting two hits.

The Ads had one extra-base hit, a home run from Brian Baxa, who found out recently he needs Tommy John surgery and will only play first base and bat throughout the rest of the season.

“I’ve been really proud of the team since we gotten the bad news about Baxa and his arm, it was a shot to them the way he got hurt, they struggled the game after, but since then they’ve rallied around him,” Morse said. “It fired up Brian, he’s on a tear. I think he’s hit four or five home runs since then.”

Boyle had 10 hits, including a Kaden Gervacio home run. Karson Thompson had three hits and Cameron Walker had two.

Both teams are heading down the homestretch of their regular seasons and aiming for next week’s district tournament. While getting the win over Boyle “is always a good thing,” Morse said he wasn’t sure how much it’s going to help in next week’s games.

“It gives you confidence heading into that,” he said. “But I think our district is wide open. … I think you can throw all the seeds out I think in the first time I can remember for our district. It’s wide open for anybody.”

Wynn stopped short of calling Monday’s loss anything close to good, but he did admit it brought back memories of last year’s 8-7 loss to Wayne County in the first game of the 12th Region tournament, a game in which the Rebels killed themselves with errors and walks — much like Monday’s loss.

“I don’t think the way we played tonight is a good loss,” Wynn said. “But I did bring it up that last year, in the region last year we lost a one-run game to Wayne County … and that’s kind of what this game was. If anything, it was a reminder. It might have been more of a reminder of what happened at region last year.”