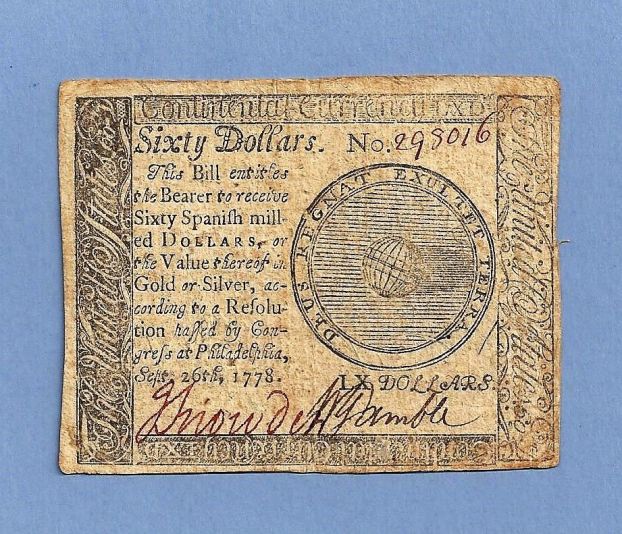 The Spanish milled currency front shows a bill is worth 60 dollars and number 298016. “This bill entitles the bearer to receive Sixty Spanish milled Dollars, or the value thereof in Gold or Silver, according to a Resolution by Congress at Philadelphia, Sept. 26th,1778.

A piece of Kentucky history has been found after it went missing 61 years ago.

Mary Morris Pipes sent a 1778 Spanish milled currency $60 bill as proof of her husband’s service during the Revolutionary War when she applied for his pension in 1837. The pension file is W8517, which is located on the corner of the currency.

The money, paid to her husband for his military service, was the only proof she had of his being in the war. The currency was not returned to Mary and went missing after it was displayed in the 1960s at the Kentucky Historical Society.

The bill was displayed at the Louisiana Purchase Exposition as part of the display from the War Department and afterwards put in the National Archives with other items from the display, rather than returned to her application files.

It was found in 1942, but kept in the National Archives because it was so unusual, according to research.

Senator Thurston Morton, on behalf of family members that wanted the money returned, petitioned the government in 1961 to return the money to Kentucky and allow it to be displayed in the Kentucky Historical Society.

National Archives claimed that all documents sent for proof of applications would not be returned and should stay with them.

Because it was not returned to Mary’s files and was no longer on display, they finally allowed the money to come to the Kentucky Historical Society on loan only. The director at the time accepted the terms.

The matter came to light October 2016 while local genealogist Carolyn Crabtree was doing research for descendants of the Pipes family who lived in the west end of Boyle County.

She learned that Mary applied for the pension and had not gotten the bill returned to her.

After talking to Stuart Sanders and contacting Deborah Van Horn at the state Historical Society, Carolyn asked if it was possible to see the currency.

However, the currency has been missing until Deborah found it a few weeks ago while working on the comprehensive collections inventory.

“One of the goals of the project is to touch every piece in the artifact collection to get good information on them and solve some of the mysteries like this,” she said.

After checking with the National Archives which actually owns the currency, Deborah was told to return the piece.

Carolyn did get to examine currency, but was not allowed to get a photo. She found an exact copy of the bill during her research.

The currency was made by David Hall (1714-1772), a printer and business partner of Benjamin Franklin.

Hall was a Scottish journeyman printer invited by Franklin in 1743 to Philadelphia to join his printing firm. Five years later, he entered into a partnership with Franklin.

Hall ran Franklin’s newspaper, the Pennsylvania Gazette so successfully, that in 1766, he bought out Franklin and formed the new printing firm of Hall and Sellers.

Franklin sold his half of the business to William Sellers, his journeyman printer.

The new firm carried on government printing, including paper money for the Province of Pennsylvania. Hall also had a bookselling and stationery shop related to his printing shop.

Later, John Jr., Phillip and Sylvanus moved to Kentucky, while Abner and Windsor moved to Mississippi.

After she died in the late 1700s, John and two of his children went to New Jersey where his militia units were before the Revolution began.

John Jr. and Mary Morris, age 17, were married on August 23, 1877, in Morristown, New Jersey while he was on leave from Washington’s Army. They returned to Surry County, N.C., to be close to family after the war.

Mary writes in the pension application that he fought in 16 battles during the war and resigned his commission in about 1779 and they moved back to North Carolina.

John Jr. joined as captain of the North Carolina as a “Minute Man” after moving back there in the late 1700s.

After the war ended, the couple purchased 38 acres from James Brumfield in 1795 and spent the rest of their lives in the Brumfield community in western Boyle County. 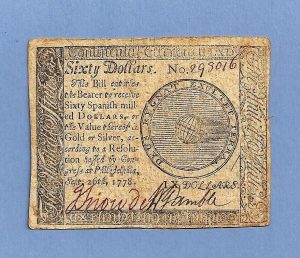 The Spanish milled currency front shows a bill is worth 60 dollars and number 298016. “This bill entitles the bearer to receive Sixty Spanish milled Dollars, or the value thereof in Gold or Silver, according to a Resolution by Congress at Philadelphia, Sept. 26th,1778. 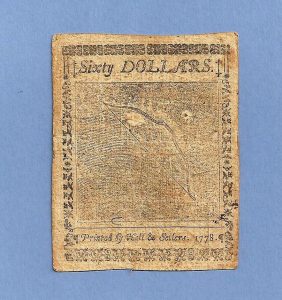 The back shows the bill was printed by Hall and Sellers, 1778.

From our files, May 6

100 YEARS AGO — 1917 City of Danville Ordinance No. 290 states in part: The following diseases, having been declared... read more