Thumbs Up, Thumbs Down: May 16

Saving historic properties is not a simple task. The value of many historic buildings from a preservationist perspective is enormous, but unfortunately, the hard dollar value in a free-market economy is often much lower.

When Danville lost the historic Fisher-Byington house in 2016, it was because of the dichotomy between its historic value and its economic value. For preservationists, the house was an important piece of local history. But the balance sheet from an economic perspective had too much cost and not enough return to justify saving the old house.

The City of Danville is currently involved with two historic but condemned buildings along Main Street where the same types of issues may be coming into play.

This is why we like the proposal from Boyle Landmark Trust, in partnership with the Main Street programs Heart of Danville and Main Street Perryville, to create a revolving fund that could be used to purchase, restore and resell threatened historic properties.

In theory, funds would be raised from local donors and used to save a historic structure; then, the sale of the now functional and usable property would pay back some of those expenses.

It sounds a bit too pie-in-the-sky at the theoretical level, but if the experts retained by Boyle Landmark Trust to work on development of the fund are any indication, it has worked elsewhere and hopefully can work here.

It may be that, once it’s established, the fund will be in continual need of donations to refresh its balance when a restoration costs more than what a property can be sold for. But that’s a perfectly acceptable way for something to function — in fact, it’s very similar to the economic development theory behind building a “spec building.”

We hope to be writing stories in the future about a property saved by the revolving fund.

Speaking of the cost to restore buildings, Danville’s downtown fire station is clearly in need of a total replacement.

The picture painted by an engineering report on the building’s condition is not pretty. The outer walls are pulling away from the main structure; the rear bay doors are permanently blocked by support beams preventing the back wall from collapsing; a whole section of the vehicle bay can’t hold vehicles because the floor could cave in; and there are no sprinklers or unified alarm system — in a fire a station.

The building is heated and cooled by units rated for mobile homes and it has no proper ventilation system — one engineer working on the report noted the only ventilation in the building currently is when the bay doors are open or — problematically — through cracks in the walls and around unsealed doors and windows.

The station’s structural integrity is so poor that Mayor Mike Perros couldn’t even get the mildest of assurances from the engineers that the building was even safe.

“Is there any imminent danger here?” Perros asked of the engineers last week.

“That is a concern … (without more testing), we couldn’t tell yet how soon there might be failure of those walls,” one engineer responded.

“I honestly couldn’t tell you,” another said.

It’s clear that Danville’s first-rate firefighters are working out of a third-rate fire station. They can still do their jobs for now — and they have done their jobs admirably for many years despite a sub-par station. But the engineering report makes it clear that, without intervention, the likelihood that the current station fails catastrophically goes up every day.

Members of the Danville City Commission are right to be abandoning thoughts of restoration or addition and moving immediately to plans for a new station. 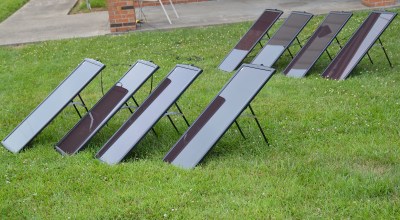 Thumbs Up, Thumbs Down: May 9