Before a group of about 20 cheering community members, the Danville Board of Education announced plans to maintain the Bulldog as the mascot of Bate Middle School. 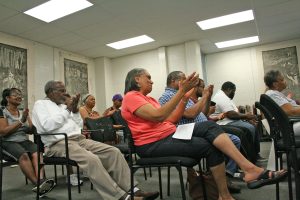 Kendra Peek/kendra.peek@amnews.com
Community members cheered at the annoucements relating to the new name of the John W. Bate Middle School and the decision to maintain Bulldogs as the mascot of the school.

And, in a move that heard more celebration, the name of the Danville Bate Middle School was officially changed to the John W. Bate Middle School, in keeping with the district’s elementary schools, which honor their namesakes’ full names.

Both decisions were made unanimously. 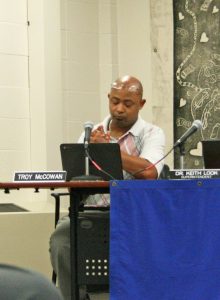 “(The name change) should have been done years ago,” said board member Troy McCowan, as he addressed the community.

He and board chairwoman Paige Matthews said the error didn’t dawn on them until it was brought to their attention by members of the community, and was a change they all wanted to make officially.

McCowan history of John W. Bate — how he faced many obstacles in educating the young African American children in Danville in the late 1800s and the early 1900s. Some of his greatest opponents in educating the children were other African American leaders in the community, especially those who were in charge of private religious schools and who believed only those institutions could properly educate the children.

At the age of 85, after 59 years as principal, Bate retired from Bate School. It had grown from one room to 20, from one teacher to 15 and from six students to 600. It also had a partial gymnasium and was an accredited high school.

According to a presentation given by James H. Atkins, a John W. Bate historian, it was Bate High School from 1912 to 1964, when the schools integrated and Bate became Bate Junior High. In 1978, the new Danville Bate Middle School was constructed behind the Bate Junior High, which was torn down.

On March 28, the Danville Board of Education voted unanimously to change all of the mascots in the district to the Admirals with the opening of the Edna L. Toliver Intermediate School, in order to encourage unity in the district.

Within the week, The Advocate-Messenger and the Danville Independent Schools central office each received a letter, along with a document titled “Repeal of Mascot Change” from the Bate High School Alumni Association, speaking out against the change. The members called the change “unacceptable.”

Glenn A. Ball, alumni association board member and letter-signer, said then that the change was taking away part of the legacy that was Bate School.

“It’s a matter of history and a matter of legacy. It’s always been like that,” Ball said. “That is our identity. That is Bate School. It should stay that way.”

And it now it will.

“I just want to thank Mr. Ball and a lot of others out here tonight for helping a lot of us understand some history that some of us probably weren’t aware of,” said Matthews on Monday night. “It certainly was never our intent by any means to disregard something that’s obviously such a very important part of Bate history.”

Member Steve Becker thanked the community for contacting him and the other board members. He speculated having heard from about 40 people via phone or email speaking out about the change.

“What I found intriguing was — it wasn’t just graduates of Bate in the past. But it was also the ones who have gone through Bate in the present that really made an effort to let me know how important the Bulldogs are to Bate. That really made a difference to me,” he said. “That shows that everybody truly believes the bulldogs need to be the mascot of the school.”

“I happily make the motion that we maintain the mascot of Bate School as the Bulldogs,” Becker said.

After the meeting, Ball said, “Thank God everything is back in order.”

He said he believes part of the success in getting the mascot reversed and the name fully changed was that they did things the right way, by writing the initial letters, getting signatures and getting people involved.

“It alerted them that it was more than just a name change. There was a history and a legacy involved,” he said. “This was a legacy, history issue that could not be overlooked.”

He said the fact they were willing to listen helped, but most important was how the opinions were voiced matters.

“We didn’t throw stones or bricks. We followed the procedure. We alerted them to what was going on. And everyone showed up to voice their opinion by their presence,” Ball said. “Their presence meant a whole lot.” 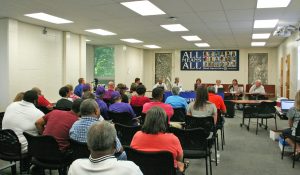 Out with the old: King Buffet demolition