GABBF 2017 poster gives overall view, inviting you closer in to see all of the elements 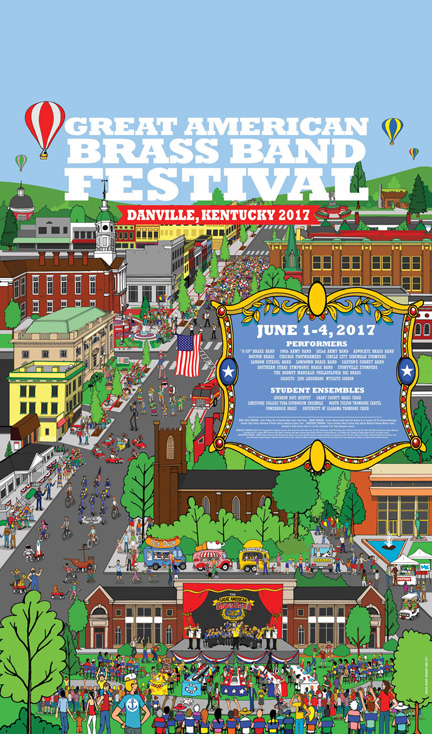 “It was a handful, but I knew going into it — it was going to be over the top.”

Long’s right. As in “way more than expected,” the poster-design not only highlights the big, traditional events of the festival — the parade, balloon race, the picnic and bands — but is chock full of local townspeople, parading on their own to and fro events, waving to performers and greeting one another.

“They added a kids’ poster this year — designed by Lily Phillips — and it shows an overview of what she imagines the festival to be like. She threw in a carousel, several different things. I thought, wow, wouldn’t it be cool to combine that whole idea of little people with this overview of the festival in one big poster? Something really big with tiny little details.”

Long said, at the time of our interview, he’d spent more than 101 hours working on the design. 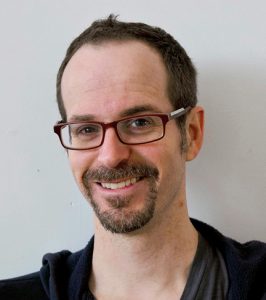 “I think that one of the limitations of any poster for any event — you’re limited in what you can show. By showing one thing, you’re not showing the others. It’s impossible without going way overboard to show the entire impact of the festival across town. I thought it would be fun to do that with drawings. I have all the elements of the festival going on at the same time.”

In his studies for creating the design, Long found one of the hardest things to do was figuring out how to include all of downtown Main Street. The poster is an arial, bird’s-eye view, but not completely overhead.

“It’s kind of a skewed perception,” Long said. “I got on Google Earth to see the street view, and crawled down Main Street to make sure I got all of the elements right.”

Funny thing, he said – the street view on Google was taken during the setup for a GABBF, complete with police blockades being installed and other festival preparations.

While he attempted to capture almost all of downtown, not every business could be included. “If you don’t see your business, it’s because it’s on the right end of the street …”

Once he knew what he wanted to draw, Long would trace his drawings with fine-point markers, scan them in and email them to himself, then use Inkscape to turn the images into vectors, then color them before pulling them in for final composition.

“Each building, each person or people-clumps would be drawn separately so I could move them around. Composing everything was almost like having a bunch of little stickers that you could move around and resize.”

Although Long is an accomplished artist with many years of experience, he did humble himself enough to take some pointers from one of his biggest fans — his daughter, Jillian.

“She gave me some pointers here and there, sure …” Long said and laughed. “There’s a tiny little picture of my family in there, we’re all waving. There’s a few other guest appearances — John and Susie Roush (Centre College’s president and wife), Mayor Mike Perros, and (Danville Police) Chief Tony Gray makes an appearance …”

The official Great American Brass Band Festival 2017 poster is available at the GABBF offices, 320 W. Main St., and will be sold at Festival Market June 3-4. Organizers say there are a few other places around town to purchase the poster, including the Community Arts Center, Maple Tree Gallery, the Danville-Boyle County Convention & Visitors Bureau, the gift shop at Constitution Square Historic Site, the McDowell House and A&L Accessories.

Board votes to reinstate Bulldog as Bate Mascot, officially…