Mr. and Mrs. David McAfee, of Danville, announce the engagement and forthcoming marriage of their daughter, McKenzie McAfee, to Ryan Hammer, of Ashland, son of Mr. David Hammer of Winchester and Mrs. Patricia Osborne of Ashland. 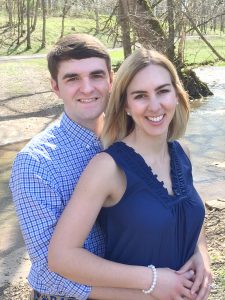 The bride-elect is a 2007 graduate of Danville High School, 2011 graduate of Eastern Kentucky University and a 2012 graduate of Bluegrass Community and Technical College. She is a dental hygienist with Bostick Dental in Danville. She is also the granddaughter of the late James E. and Dale Roy, and Patsy McAfee and the late James McAfee.

The groom-elect is a 2008 graduate of Paul G. Blazer High School and attended Bluegrass Community and Technical College. He is a supervisor at Hitachi Automotive in Harrodsburg. He is the grandson of Michael and Doris Horton, Vernon Hammer and the late Betty Hammer.

A June wedding is planned at Southland Christian Church in Nicholasville with a reception immediately following at Champion Trace Golf Course.