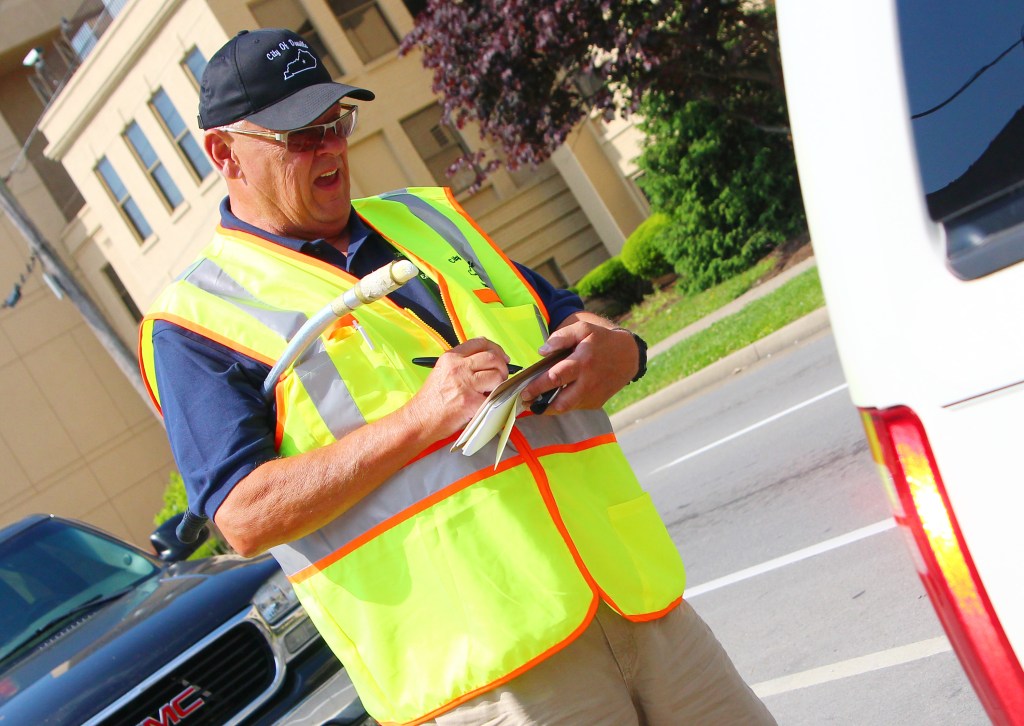 Ben Kleppinger/ben.kleppinger@amnews.com Danville Parking Enforcement Officer Roger Hartner writes up a ticket for a vehicle parked illegally along South Third Street in Danville on May 10.

He retired for the first time after a lengthy career working to help disabled people find employment. He started his own business, then eventually sold it and retired for the second time and moved to Danville. Once here, he found himself working again, this time for the Danville Independent School District, helping disabled students.

“So I spent quite a number of years there, and then retired again from Danville Schools,” Hartner said. “There’s nothing wrong with retirement — I enjoy it very much. But you need a plan in retirement. And I worked through my plan already. I’ve done all the fishing I could do and I’m terrible at golf.”

Hartner said he got the itch to do something again — something that would allow him to work “both in a service capacity and something I would enjoy.”

And so, Hartner is back at it — part-time, at least — as the City of Danville’s new traffic enforcement officer.

Hartner works less than 100 hours a month, but since he started in April, he’s been stacking up quite a tally of tickets as he patrols the 2-hour and permitted parking areas of downtown Danville.

Hartner is allowing the city to once again enforce its downtown parking rules, which had gone without a dedicated enforcer since the last parking officer, Jeff Peak, stepped down months ago, Lester said.

Issues with vehicles occupying downtown spaces for many hours or even days were bad enough at one point that complaints were made to Danville City Commission. 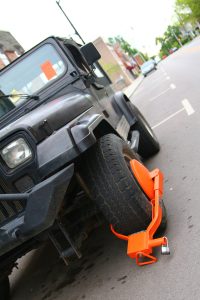 Ben Kleppinger/ben.kleppinger@amnews.com
A bright orange boot is seen on a Jeep along North Third Street in Danville on April 25. The boot generated attention on social media and from Danville City Commission as evidence of a renewed focus on parking enforcement in downtown Danville.

In April, less than two weeks into his job, Hartner had booted a black Jeep on north Third Street due to unpaid parking tickets — an action that gathered quite a bit of attention on Facebook, as well as from city commissioners, Lester said.

Danville’s parking rules allow a vehicle to be booted if there are at least three unpaid parking tickets associated with the license plate and it’s been at least 24 hours since the last ticket was issued, Lester explained. Twenty-four hours after a vehicle is booted, it can be towed — but it didn’t come to that with the Jeep, she said. The city hasn’t yet had to boot another vehicle.

But issuing tickets and booting cars is not what Hartner said his goal is with the job. He will often make extra effort to find vehicle owners in nearby stores and give them a chance to move before he issues a ticket, he said.

“I try not to be pushy and shove tickets on people — quite the opposite,” he said. “… I’m not looking to write tickets — I’m really not. I’m looking to make friends.”

Hartner said his goal is to make sure parking is available for downtown businesses — and to help promote Danville to visitors.

“If I have something I’m proud about in the four weeks I’ve worked here, I’ll tell you what that is — on three separate occasions, I’ve met people walking Main Street who were just then visiting Danville,” he said. “They saw that I had my fancy regalia (neon vest), my little twirly thing that I mark tires with, and they started asking me questions. And I was able to direct them to the visitors bureau; they were hungry, I said, ‘well, let’s go to the Hub.’ One I took to Grace Café — they really liked that …

“And they were asking about retirement in this town. You know how people come here looking, so I got to tell them what it was like to retire in Danville.”

There is one parking violation that Hartner does keep an eye out for in particular, because of his background in helping disabled people. 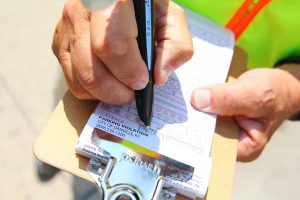 Ben Kleppinger/ben.kleppinger@amnews.com
Roger Hartner’s pen and pad for issuing parking tickets are high-tech — the special paper allows the digital pen’s camera to read what Hartner writes as he writes it. A digital version of the ticket is sent to his cell phone and then into the city’s parking ticket database as soon as he finishes writing the ticket.

“My personal quest is anytime someone parks in front of a handicap spot and shouldn’t be there, I’m on them very emphatically,” he said. “Forty-five years of my life I’ve spent working with persons with disabilities. I was involved, believe it or not, in Section 504 of the Rehab Act in 1973. I testified on Capitol Hill to help with what was called ‘reasonable accommodation.’ … I was telling people the disabled do not wish to be given special privileges, they just want to be accommodated.”

The fines Hartner issues can start out pretty small — a first-time 2-hour parking violation costs $5. A second offense is $15; a third is $30; a fourth is $50; and all subsequent time violations within a 12-month period are $75.

Other fines apply for parking on yellow curbs, in permitted lots without a permit or in handicap spots without a tag.

“I’m not making the city any money,” Hartner said.

According to Danville CFO Michele Gosser, Danville collected around $6,700 in parking tickets last fiscal year; the city collected about $12,600 the year before that. Hartner hasn’t yet been on the job long enough for the city to know how much his tickets are bringing in, Gosser said.

Lester said it’s possible the city could net some money from parking enforcement in a given year, or lose money another year. Making money for the city is not a goal of the program.

“People think we’re doing it just to make money for the city because we don’t have enough money in the city budget — you hear people say all those sorts of things,” she said. “This is just strictly to control people’s behavior and to help keep traffic moving.”

“Yellow curbs are put there for a reason,” she said. “… There’s danger there.”

Hartner said he thinks his work helps make downtown Danville safer for pedestrians — an issue that’s been on many people’s minds recently. 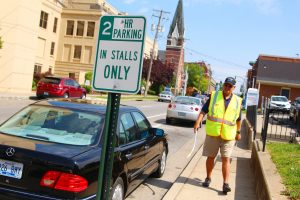 As Hartner walks the streets, he says he gets a kick out of the cat-and-mouse game he plays with some downtown parkers, who will roll their vehicles between parking stalls to avoid tickets — which is a legal move.

“Some people like to play what we call the parking dance,” he said.

Hartner has gotten to know some of the dancing vehicles by heart — he can point them out as he walks his routes.

He has various strategies to prevent people from gaming the system — he won’t always start his patrol at the same time or go the same direction.

“I don’t do it to be tricky,” he said. “It’s to try and help the retailers and the businesses.”

Hartner keeps an activity tracker on his wrist while he works.

Code Enforcement Director Bridgette Lester and Parking Enforcement Officer Roger Hartner told The Advocate-Messenger about many of the basic parking rules in Danville, as well as some common misconceptions people may have:

• Parking tickets can be issued by a parking enforcement officer, a code enforcement officer or a police officer. They cannot be “waived” by city employees; instead, anyone wishing to appeal a ticket must appeal to the Danville Parking Regulation Board, which meets on the second and fourth Thursdays of each month when there are appeals to be heard.

• If a parking ticket isn’t paid or appealed within seven days, the price doubles.

• Fines of $50 for parking in a handicap space without a tag can be reduced to $15 if the vehicle’s owner presents proof to the Parking Regulation Board that they had a tag but failed to display it.

• Hartner regularly patrols downtown Danville between Second and Fourth streets, from Broadway on the north side to Martin Luther King Boulevard on the south side.

• Enforcement of the 2-hour parking limit begins no earlier than 9 a.m. and ends no later than 5 p.m. Parking is free on weekends.

• Hartner will not be assigned to work when the weather gets too cold or snowy, or too hot and humid, and it doesn’t work to chalk tires when it’s raining.

• Photographic evidence of every parking violation is collected at the scene when the ticket is issued.

• Parking is also available in the downtown parking garage on Walnut Street. Rates are $3 for four hours and $5 for all day; parking is free if the vehicle enters after 5 p.m. and on weekends, but charges begin if the vehicle is left overnight into a weekday.

• People with jury duty receive parking permits for street parking only; if they park in the permitted lots behind the courthouse, they will still get tickets.