On April 28, Danville Rotarians and their guests were treated to a performance — which was awarded a standing ovation from a full house — by Gregory Turay, Centre College’s Alltech Artist-in-Residence. 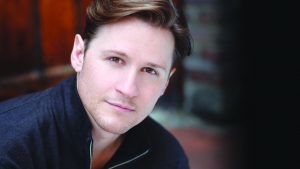 Turay has graced most prominent stages across the globe, and the London Times has hailed him as “one of the brightest natural talents to have emerged from the United States in recent years.  Turay, soon to be Dr. Turay, performed: “O Sole Mio -Eduardo di Capua;” “Bring Him Home” (from “Les Miserables”) and “Love Changes Everything” (from “Aspects of Love”).

Between vocals, Turay recounted highlights in his journey from Racine, Wisconsin to the University of Kentucky and on to worldwide fame.  After a 20 year career, he returned to U.K. to finish his doctorate and then came to Centre College as Alltech’s Artist-in-Residence.  It has been an extraordinary journey.

Milton Reigelmann introduced Turay and his accompanist, Zach Klobnak (who had recently successfully defended his Ph.D. thesis at the University of Illinois). Many Centre faculty were in attendance, including John Roush, Centre’s president.

Turay grew-up in Racine on a farm with 30 horses.  He became a showman after learning dressage from his mother, who was a trainer.  He also rode hunter and jumper, and was in the process of becoming a jockey at Arlington when his mother died. He was only 13 and his father, an accountant, moved them into a suburb of Milwaukee called Greendale. There he started to perform in musicals, like “Hello Dolly” and “Singing in the Rain.”

“I actually learned to tap a little, but mostly I just wanted to meet girls,” Turay said.

In addition to singing, he became involved in athletics — baseball was his passion.  It was baseball that brought him to U.K. He planned to major in business so he could manage a team when his playing career ended. His baseball plans did not materialize, because he met Everett McCorvey, U.K.’s Director of Opera at the School of Music.

McCorvey told him, “‘Young man, you should learn to sing Opera,’ and that’s what I did,”  Turay said. He studied under McCorvey for five years.

His baseball aspirations ended in his first year, when he learned he would have to be in choir every day of the week from 2-4 p.m. and baseball practice was from 2-5 p.m. every day.  Fortunately, his singing career took off very quickly.

Turay won a voice competition at Palm Beach after a year, and a couple of years after that he won the very prestigious Metropolitan Opera National Council Auditions.  He won $10,000 and an invitation to join the Young Artists Program at the Met.

Surprisingly, he turned the invitation down because he felt he needed to work more on his technique.  Fortunately, it was offered to him again the next year and he decided it would not be smart to turn it down twice.

He moved to New York in 1996, and joined the Young Artist Program.  After one year, he made his debut on stage in a small role.  Later that same night, he got a call from James Levine, the music director of the Metropolitan Opera, congratulating him on his performance.  A couple of weeks after his debut performance, he was the backup to a singer who got sick got the call to assume his role on opening night.  The opera was Mozart’s “Don Giovanni” and his role was Ottavio.  At the age of 24, he was the youngest ever to play this role.

After his success as Ottavio the roles began to increase every year. Turay hired an agent and shortly began a career that spanned 20 years and took him to virtually every country in the world.  Along the way, he was awarded the very prestigious Richard Tucker Foundation award, totaling $25,000. His family traveled with him when it was possible, but he missed a lot of his children’s events. He and his wife were looking for a better family solution when he again talked to his old mentor, McCorvey, who suggested Turay come back to U.K. and become the artist-in-residence, were he could teach, complete his master’s degree and still perform occasionally.

So in 2009, Turay, his wife and three children came back to Lexington. He finished his master’s and in two weeks will defend his Ph.D. thesis, “Fall of the Tenor with the Rise of the Larynx on Broadway,” which addresses the likely causes of a tenor’s decreasing vocal range in Broadway productions. Turay believes the vocal range of tenor roles has dropped by about a third, almost into baritone range.

To conclude his remarks, he said his two sons have allowed him to get back to coaching baseball, but since his wife is a full-time music teacher, he also has Mr. Mom roles like taxi driver and making meals. His wife, Louise, also had two successful singing tours on Broadway before deciding to leave her career to travel with him. Their daughter has a promising future as a singer, if she makes that choice.