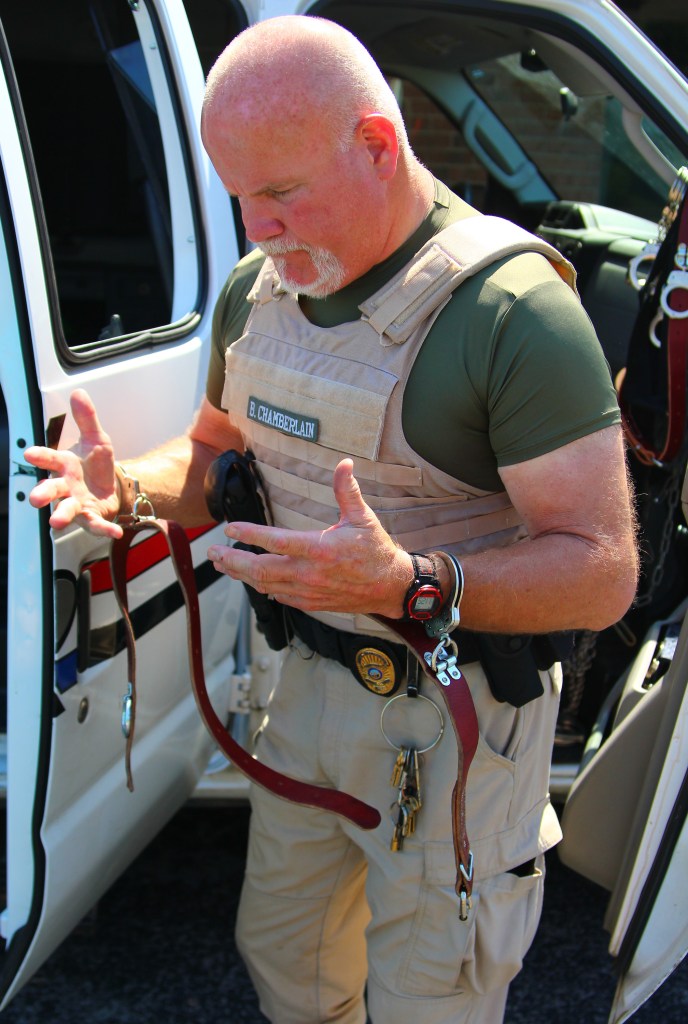 Mercer County Jailer Bret Chamberlain says an escape by an inmate last Friday is proof that he needs a van better equipped for transporting prisoners, not one he calls a “church van.”

The jailer made a visit to the Advocate-Messenger Monday to talk about what he feels is the real story behind Friday’s incident, when an inmate busted out the back window of a transport van and almost escaped.

“It’s a blessing that no one got hurt,” Chamberlain said.

At 11:34 a.m. Friday, Chamberlain said he was driving the Mercer County Jailer transport van and preparing to cross U.S. 127, turning into the Boyle County Detention Center, when Evan Goodlett, 25, of Harrodsburg kicked out the window.

According to Chamberlain, Goodlett jumped out and fled across the road. He was still in humane cuffs, which is a leather belt with handcuffs attached, keeping the hands separate and at waist level.

Goodlett entered the old ATR building — now home to Danville Office and Industrial Liquidators, the Bluebird Market and a portion of DANA Incorporated — where he managed to find something to cut the leather belt, said Chamberlain.

Although Goodlett was caught without further incident, but the incident reveals a problem with Mercer County’s transport vehicles.

Chamberlain said the department has two vehicles obtained under previous jailers — one that was given to the department after being used by a senior citizens home and then by the county garage; and a second one bought new in 2009.

Chamberlain put a divider up in the 2009 van so that he can divide prisoners by sex or offender level.

The van has pop-out windows that can be opened for ventilation. That’s the kind of window Friday’s prisoner was able to kick out. Chamberlain said he plans to weld a wire mesh over the windows in order to prevent it from happening again.

But Chamberlain said his biggest concern isn’t the damage to the van.

Chamberlain said the jail department doesn’t get income from specific taxes like other departments. He said 63 percent of his budget goes to the cost of transporting Harrodsburg inmates “and the city doesn’t pay us anything.”

He’s heard of plans through the Kentucky Jailer’s Association to introduce a bill that’s potentially going to be brought up in the state house which will require the cities to contribute to county jailers’ budgets.

Chamberlain said he thinks he need more than the $23,300 currently in his budget for part-time deputies.

“The (Mercer County) Fiscal Court is doing the best it can, but I need help, wherever it comes from,” Chamberlain said. “I need help to properly keep people safe and secure.”

Chamberlain said the inmates he transports now are different.