Back for more: Boyle, Mercer running for repeat state titles 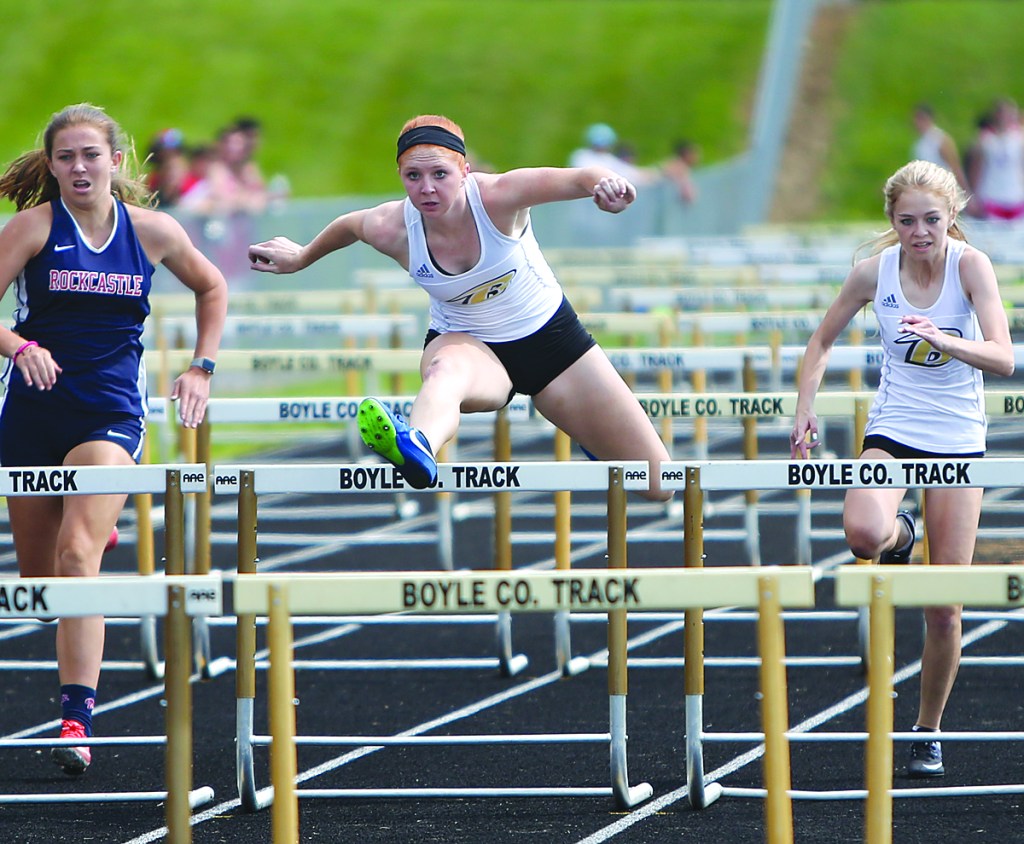 Mike Marsee/For The Advocate-Messenger Boyle County's Emmie Harris leads the Rebels into today's Class 2A state meet at the University of Kentucky.

This week has been all about fine-tuning for the Boyle County and Mercer County track teams.

Boyle girls and Mercer boys are both defending state champions, and if you look at the performance list for state, both are expected to repeat.

But both coaches are downplaying the rankings going in: Anything can happen when teams take off today at the University of Kentucky track and field complex.

On the boys side, Mercer is first place and it’s not nearly as close. But that’s something that coach Terry Yeast is skeptical about.

“When you look at the numbers based on regional performances, we’re supposed to score 117 points, (Paducah) Tilghman is supposed to score 81, Boyle at 69,” Yeast said. “I know, I’ve watched results every week. I know it’s going to be a battle and it might come down to the mile relay again.”

Mercer edged Tilghman in the final event last season — the 4×400 meter relay — to take the title. Boyle boys weren’t near the top scores, placing 21st. But this year, Boyle boys can make a statement.

“For the boys, if we do what we should and have a good day, we could get third,” Wagner said. “Top-four trophy on the boys side would be absolutely phenomenal. For the program in general, a top-four trophy for both teams, that was one of my goals for the program at the beginning of the year.”

But Boyle girls will face a stiff test compared to last year: The Rebels blew through state in 2016, beating second-place Highlands by 21 points.

“The teams that we’re going against are almost mirror-images of us,” Wagner said. “John Hardin is strong in sprints, hurdles and jumps. We’re strong in sprints, hurdles and jumps. Paducah is the same. John Hardin and Paducah will affect us the most from a direct standpoint. It’ll be interesting, a lot of times one team is good in sprints, one is good in distance so you don’t affect each other in each event. But this one is about as matched-out, one-on-one as you can get.”

Boyle boys have more newcomers than experienced athletes, but Wagner is hoping the rookies won’t get stage fright at their first state meet.

“I told them, ‘I’m not going to sugarcoat anything for you. Everyone there is going to look fast, look like they can jump high and far, vault, hurdle, everything. You’re at the state meet. You’re going to be running against the best of the best. But you wouldn’t be going if you didn’t belong.’”

Midway through the season, Yeast said he and his team had to have a meeting because he was worried about his team settling for past performances.

“We had to have a talk because I was concerned that those kids were content with winning last year,” Yeast said. “So we met as a group to talk about that because I didn’t want them to feel like it was OK to settle for what has already happened. We’re trying to build new traditions and they have to help those grow.

“After that conversation, I had a couple seniors come and talk to me and apologize for what they haven’t been putting in and that they were going to do better. You can tell that they started to show more leadership. As seniors, it’s hard because it’s almost over. What do they call it, senioritis? It goes into everything. I think when we hit our stride toward the end of the season, things just started to click. Chase (Edwards) has done a really good job, him and Dustin Baker, they’ve done a good job leading by example.”

Another senior Yeast mentioned was Zack Phillips: He scored points in both throwing events at region and placed second in the shot put.

“I’m really happy with Zack Phillips, he came into the region ranked 15th in the shot put,” Yeast said. “All along he told me how he was going to help the team win this year, he’s a first-year senior. Now, he’s qualified in the shot and the discus. He had a four-foot improvement at the region meet. It’s things like that, you see the importance of taking care of your family.”

Both Boyle girls and Mercer boys have the talent and experience to win state. It’s about taking care of business.

“The good thing about is that we’ve been there before,” Wagner said. “We’ve also had kids who have not been there at all who have won state. So it kind of goes hand in hand, I think everybody definitely knows that we won last year, and that holds credibility, but at the end of the day you have got to perform.

“If we just go in there and do what we do, we control our own destiny. That’s what we want more than anything. Because we don’t have to rely on taking points away from someone else. We don’t have to run outside of our minds to have a great day. Having a great day means hey, no surprises. We need to run fast times but we’re not asking anybody to do something that they physically can’t do.”

Yeast said it’s about focusing on what is next, particularly for his athletes who participate in multiple events.

“I try to tell them to not worry about beating everyone else, but to do what they’re capable of doing,” Yeast said. “So I tell them that if they do what they’re supposed to do, they’re going to have success. But if they don’t play their role for the team, then it will get to you. Last week, me and Mishi (Easterling) were going through, he had jumped 23 feet. He wanted to beat 23 feet. I said, ‘You don’t need to beat Mishi. You’ve already done what you’re supposed to do, so focus on your next event.’ I always say that the most important play is the next play. Don’t let the pressure get to you, just do what you’re supposed to do and you’ll be fine.”

Mercer girls will enter the state meet ranked sixth, but the Titans still have much to prove, Yeast said.

“I’m really excited. We’ve probably never been in the top 10,” Yeast said. “We have a couple events that we can improve on this week. From day one, we’ve talked about finishing in the top five. I think we can go out and do what I expect, they have a chance to pull closer to the top three. It’s exciting to see and they’ve been working really hard.”