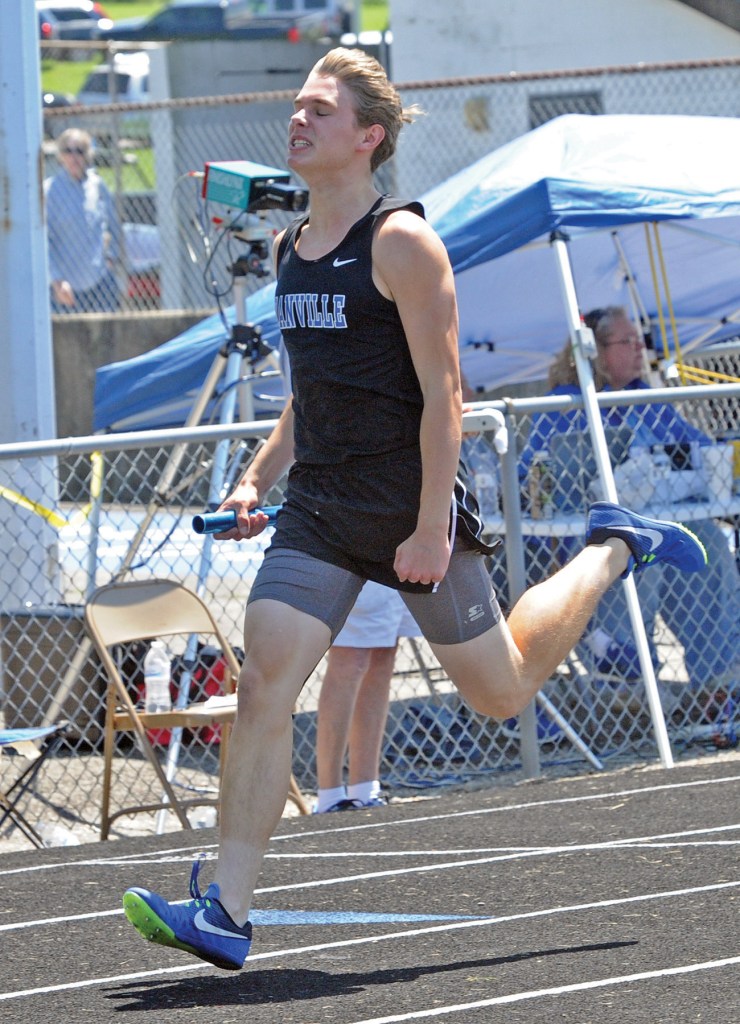 Matt Overing/matthew.overing@amnews.com Danville's Gabe McKnight will be one of the top point-earners for the Admirals at state on Saturday.

Danville track has been rising up the rankings in recent weeks.

At region last week, the Admirals made noise, finishing second on the boys’ side and third in girls. Danville had the three of the top four male scorers at the meet.

“We’re just like everyone else, we’re hopeful that the trend we’ve had the last couple of weeks, we’ve been improving and PR’ing, we’re hopeful that everyone continues to improve,” Danville coach Chris Verhoven said. “If that happens, we’re going to have several medal winners and hopefully we can get near the top of those standings. I’m hopeful that we’ll perform our best when it means the most.”

Freshman Gabe McKnight was the top earner last week at region, and he’s ranked near the top in multiple events for Saturday’s state meet in Lexington.

Verhoven said keeping McKnight focused on himself will be the key for Saturday.

Most meets Danville has ran in this season have been against Mercer County, where elite hurdlers Aaron Johnson and Lukas Jones have crushed most competition.

But when the Titans aren’t in town, McKnight has thrived, Verhoven said.

“I think he gets it in his head how good they are, especially Aaron, he thinks that he has to keep up with him,” Verhoven said. “He’s going to be that guy one day, he just needs a lot of talking to. Once you get him focused on himself, he’s a much better runner. I reminded him last year about the middle school meet, he didn’t know who he ran against at the state meet. But I said, ‘They all know who Gabe McKnight was.’ He’s going to be that target, and when he focuses on himself and the things he can control, he’s going to be a better runner. If he does that on Saturday, good things can happen.”

Danville has multiple seniors who will participate in their last meet this week. Verhoven noted seniors Charlie Lynch and Danny McAllister, who have helped the 4×200 relay team reach the state level.

“This was a 4×200 team that, at the beginning of the season, I was just wanting to put four guys together and score at region,” coach Verhoven said. “They went from running 1:50 something to dropping to 1:38 on Saturday. The drop in times, the confidence that they’ve gotten, I’m happy for them.”

Cole Verhoven and Jeremiah Wheat are two seniors who have tons of track experience and will look to make an impact this week.

“Cole hasn’t had a whole lot of state experience, so to go out in his last track meet at state is pretty sweet,” coach Verhoven said. “Same thing with Wheatie, they’ve been friends since kindergarten. To watch them grow up and get to run their last meet together, all the activities this week and next week with graduation, it’s bittersweet.”

On the girls side, coach Verhoven noted seniors Celeste Fieberg and Kennedy Walker as two who he’s excited to watch perform at the University of Kentucky track and field complex.

“Celeste Fieberg is one of our seniors, she’s ran cross country but she’s always been a softball player,” Verhoven said. “So the fact that she’s going to get to run the mile, that’ll be fun to see her. Kennedy, she’s another one, if we get her head straight, she could medal at the top at state in shot and discus. She was throwing 33 feet in practice the other day, and her meet PR is 31 feet. Two feet is a lot this time of year.”

Verhoven noted the 4×100 meter relay as an event where anything could happen. At the region meet, Danville boys finished less than a second behind LCA. But that fraction of a second was the difference between LCA’s third-ranked spot at state and Danville’s 13th spot.

“I always try to be realistic with our kids. It’s a privilege to be at state, it’s coach speak. But there’s 24 kids who make it, and when you look from 1 to 24, everyone deserves to be there,” coach Verhoven said. “Look at the 4×100 times. They out-leaned us at region, and they’re ranked third and we’re 13th. If you look at the middle and you go one second both ways, that’s almost all the 24 teams. That’s one second, that’s a handoff or a stumble. The odds are in your favor if you’re at the top all year, but it shows you the eggshell of track. It’s so fragile. One little thing could make the difference.”

Danville won’t be feeling the pressure of a title-contending team, and Verhoven said younger athletes will gain invaluable experience at the state meet.

“I always say, being the favorite, there’s more pressure,” Verhoven said. “We’ve got kids who at the beginning of the season shouldn’t have even been on the team, let alone regional champions. So now they’re going to get to go to state. That works to my advantage, when you’ve got a team that is not expected to win, you work that to your advantage.

“It can’t be said enough, experience in sports is like experience in anything else. You can finish dead last in an event, but if you’re coming back, you know what it’s like. You know where to check in, you know the track layout. You can’t replicate that. The next time you’re there, the butterflies go away, the first-time experience isn’t needed. It calms you, it gives you confidence. That can’t be taught. That’s the benefit for our young people who haven’t been. Being there, it’s different.”

Back for more: Boyle, Mercer running for repeat state…