Weisiger completion about a week away, engineer says 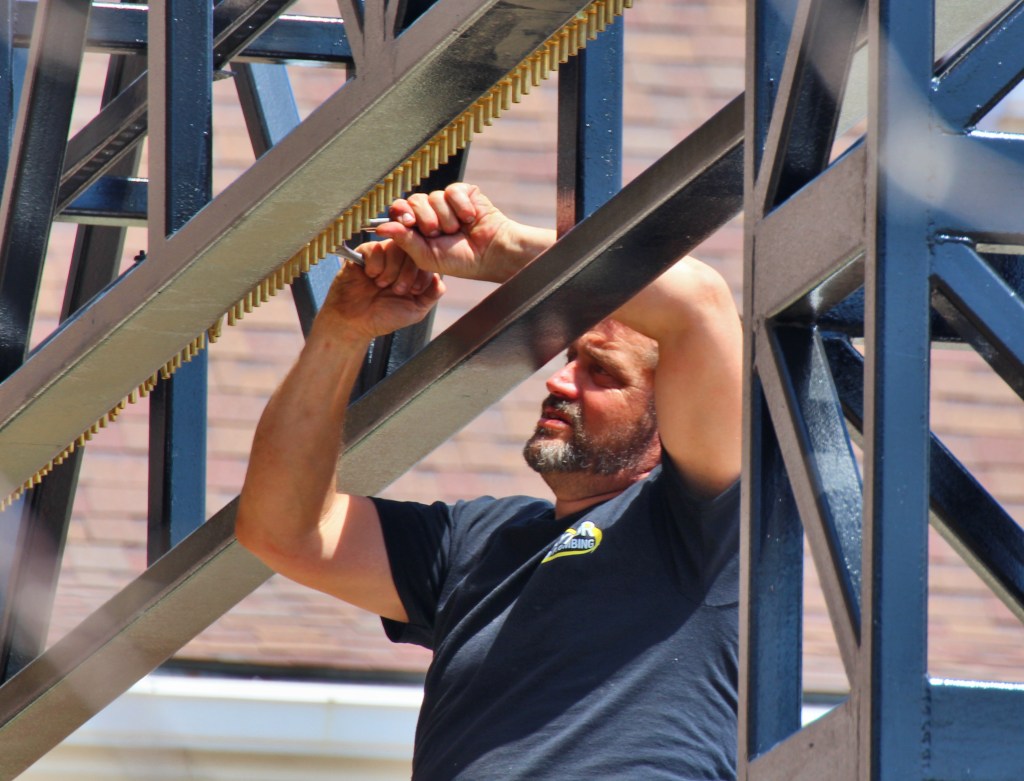 It’s two weeks until the Great American Brass Band Festival takes over downtown Danville, but Weisiger Park, a central location for the festivities, is still partially fenced-off as work continues on the installation of a water curtain.

The work will be wrapped up quickly and the park will be ready before the festival begins, City Engineer Earl Coffey said Thursday.

“We are right in the middle of finishing it up and we actually hope to have sod up there this weekend,” he said. “… By Brass Band, it’ll be alright. We may put up some caution tape around (the sod).” 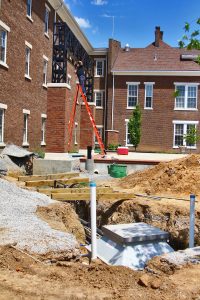 Ben Kleppinger/ben.kleppinger@amnews.com
A plumbing system for Weisiger Park’s new water curtain feature is still visible in a fenced-off portion of the park, as city officials wait for power so they can test the system.

Coffey said the water curtain’s plumbing is installed; the city is waiting for Kentucky Utilities to energize the system so it can be tested. Once testing is complete, the city will fill in the ditches where the plumbing is running and lay down the sod, he explained.

The water curtain is the final and most-delayed part of a years-long redesign of Weisiger Park, which has been estimated to cost more than $650,000. The city saved money for several years in order to fund the project entirely from savings.

Numerous delays have slowed work on the project since the city commission gave its approval for the three major features in the renovated park — the pergola, fountain and water curtain — in February 2016.

Most recently, Coffey told City Commissioners in April that sub-contractors for the Weisiger Park project were also doing work on the city’s more-than-$23 million water treatment plant upgrade and were therefore delayed from working on Weisiger.

Coffey said Thursday that the city has now switched sub-contractors for some of the work in order to get it done. The city has hired a new mason, a new plumber and a new electrician “to finish up the job,” he said. 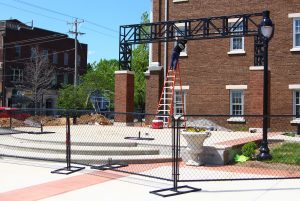 Ben Kleppinger/ben.kleppinger@amnews.com
The water curtain feature and the stage it backs will be a focal point of Weisiger Park once completed. Danville City Engineer Earl Coffey says the park is expected to be ready for use for the Great American Brass Band Festival, June 1-4.

A plumber was at the park Thursday afternoon, adjusting the water nozzles on the water curtain. Coffey said Kentucky Utilities and the newly hired electrician will be working on the park today and Monday. If everything goes as planned, the city can then test the water curtain and fill in the ditches. Asked if the project could be essentially completed by May 26, Coffey said, “yes, that’s our goal; that’s the plan.”

Here’s a brief history of the work done on Weisiger Park since February 2016 and the delays the city has encountered:

June 3, 2016 — Park is prepared and opened for the Brass Band Festival; it will be open but with no water curtain yet. Park closes again after the festival for further work.

July 3, 2016 — Officials estimate the park could be open again by July 8; the water curtain is still in the works.

July 11, 2016 — Danville City Commission approves spending $42,000 for completion of the water curtain; the project is still estimated to be within budget.

Sept. 26, 2016 — City Engineer Earl Coffey says the metal structure for water curtain and other materials have been delayed in arriving; he estimates it will take 6-8 weeks to complete, putting the anticipated completion date between Nov. 7 and Nov. 21, 2016.

February 2017 — City commissioners learn the current equipment for the fountain will not be powerful enough to create a desired “bubble” effect with the water.

April 24, 2017 — Coffey tells commissioners the project is nearly complete; he says workers could be doing landscaping by May 1.

May 18, 2017 — Coffey says water curtain feature is fully installed and the city is waiting for Kentucky Utilities to provide power so the system can be tested before the pipes are buried and sod is put down; he estimates the park could look complete by May 26.