“Pat” Patrick O’Neil Sanders, age 80, of Stanford, went home to be with the Lord on Friday, May 19, 2017 at Central Baptist Hospital in Lexington. Born Sunday, January 10, 1937 in Waynesburg, he was the son of the late Nicholas Patrick and Nora Greer Sanders. 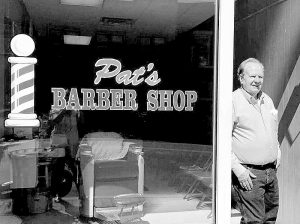 Pat worked as a Barber in Stanford for over 58 years, a former magistrate of Lincoln County, and was a member of Grace Fellowship Church. Over the years he served on the Blue Grass Community Action Board of Directors, National Guard Member, Member of the American Legion, and was a Kentucky Colonel.

A Funeral Service will be held at 1:00 PM Tuesday, May 23, 2017 at Grace Fellowship Church with Bro. Vola Brown officiating the service. Burial will follow in Double Springs Cemetery in Waynesburg.

The Visitation will be held 5-9 PM Monday, May 22, 2017 at the church. Fox & Friend Funeral Home, Stanford is entrusted with Pat’s arrangements.