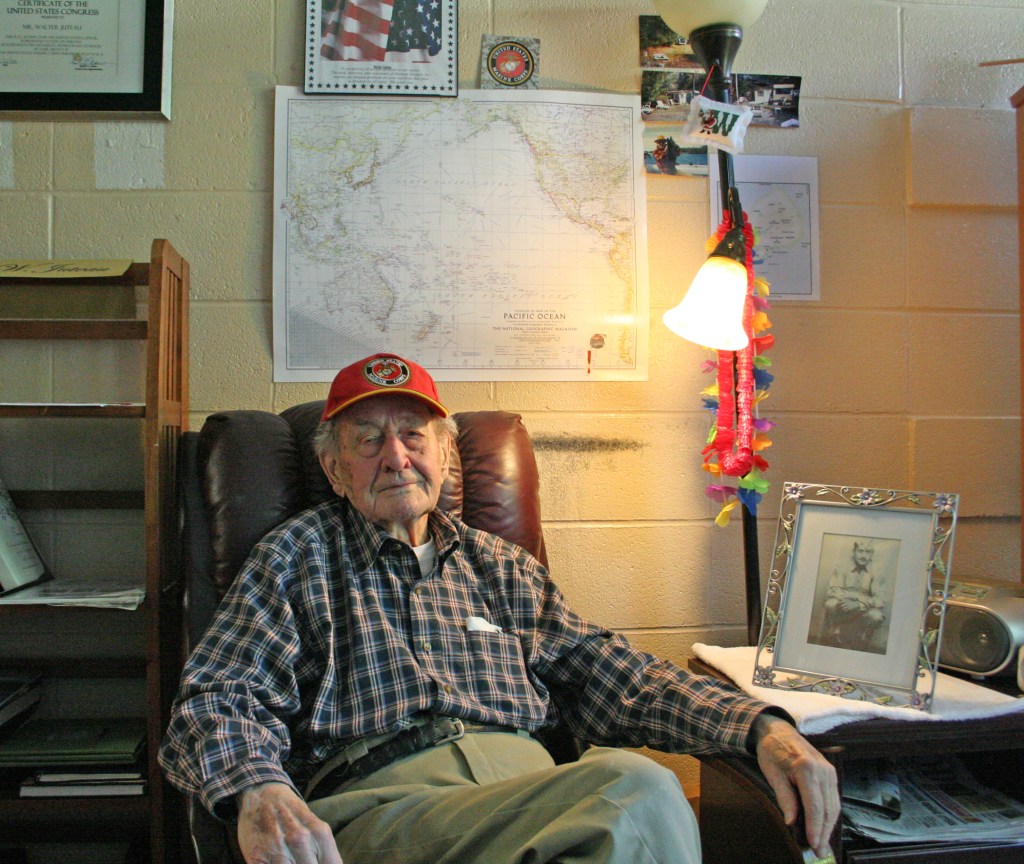 Kendra Peek/kendra.peek@amnews.com Walter Juteau dons his United States Marine Corps hat in his room at the Danville Center for Health and Rehabilitation. On his right sits a framed photo from when Jutuea was named a sergeant.

With a community party to celebrate, Walter Juteau turned 101 on Saturday, receiving a hero’s welcome by two Veterans of Foreign Wars posts and city officials, complete with balloons, food and cake — and even a key to the city of Danville.

The whole event was “unbelievable” for Juteau, who was surprised at all the attention. The party was held by the Danville Centre for Health and Rehabilitation, where Juteau is a resident. He’s the second oldest WWII veteran in Kentucky and the second oldest Marine in the country.

Juteau was born in Newport, New York, to a French-Canadian couple. He was the second-oldest of five. The family didn’t have running water or electricity — Juteau remembers when that changed, sharing with his daughter the story of the electrician helping himself to his father’s wine.

For his 98th birthday, he, along with his daughter and son-in-law Victoria and Milton Scarborough, returned to that home from Danville. They were able to go inside, she said, and look at how the house had changed since his childhood, when it housed two families.

“My father rebuilt that house,” Juteau said. “It was one of those great big old southern mansions. There were six rooms in the house and about 16 when he got done.”

In 1942, Juteau joined the Marine Corps, first stationed at Montford Point and then at Camp Pendleton. He started as a member of the Quartermaster Corps, later becoming an artilleryman when the 5th Marine Division formed.

Juteau was a machine gunner, operating an air-cooled, 50-caliber machine gun. They landed on Iwo Jima on Feb. 19, 1945, and remained for 31 days.

“He tells about trying to dig a place to put his tripod for his machine gun and he couldn’t,” Victoria Scarborough said, explaining that the heavy volcanic sand would keep shifting.

Juteau now has a jar of that sand in his room at the Danville Centre for Health and Rehabilitation, a gift from a family member who had been there.

Juteau stayed for 31 days on the island, until it was turned over to the Army. His regiment participated in the occupation of Japan, and was based in Sasebo.

When he left the service, Juteau had reached the rank of sergeant. Pointing to a photo in his room taken after his promotion, he said, “I was quite happy there.”

In 1946, he married for a second time, this time to a veteran of the Women’s Army Corps and a cryptographer in the pentagon — Scarborough’s mother.

Jody Edwards, dietician at the center and fan of Juteau, shared the story of how he met his wife at a dance hall.

“He said he saw her and it was like she glided across the floor,” Edwards said. “He was amazed by her.”

His wife died at the age of 73 in 1993. Juteau was 77 at the time, and decided to return to work. He had worked in real estate and retired. This time, he became a delivery driver for the Utica Observer-Dispatch, a newspaper in the town of Utica, New York.

Scarborough said he would have to be up by 3 or 4 a.m. to collect the paper bundles.

“Definitely,” Juteau said, agreeing. “I had a truck, about 1,000 papers. I delivered rain or snow — I’d go out at six, seven, eight below zero, fighting snow drifts.”

Sometimes, she said, he’d get called in for extra shifts, because some of the younger drivers might not show up.

An avid fisherman during his lifetime, Juteau has photos of some of his big catches, including salmon, great northern pike, and others. His whole family fished, Scarborough said, and he regularly went to Lake Ontario.

Juteau said when he was there, they would hire a boat captain to take them out. He fondly talks of fishing, still recognizing the types from the photos in his room.

In 2011, at the age of 95, he moved to Kentucky after sustaining a fall and breaking his hip.

But he hasn’t let that, or the six strokes he’s sustained, stop him. Almost every day, his daughter said, Juteau gets up, dresses in his khakis and button-down shirt, makes his bed and then makes his rounds.

“He’s been here long enough that he feels like he runs the place sometimes,” she said with a smile. “He’s much loved here.”

And Juteau is a popular resident, said Edwards. She refers to him as a “second grandpa,” having lost her own 25 years ago.

“Every day, he comes up by my office, when he feels like it, and does this,” she said, pointing to her cheek. She explained it’s his way of asking for a kiss on the cheek. “He’s like family to me.”

He’s also quite the ladies man around the facility, she said, and he still loves to dance.

“He’s an awesome guy,” Edwards said. “He’s just amazing all the way around.”

With a smile, Juteau said he takes those walks around the center to “show off a little bit.”

Since living in Kentucky, Juteau has become a Kentucky Colonel and a Kentucky Admiral. The two certificates reside in his room, along with family photos, his service medals on the wall and a flag flown over the White House before being sent to Juteau.

He also got to go on an Honor Flight in 2011, with a plane full of other veterans and their family members. Only five had been to Iwo Jima. Seeing the monuments had been something her dad wanted to do for a long time, Scarborough explained.

Juteau knows about a long time.

His sense of humor is still very strong, Scarborough said.

When asked if there’s anything he’d like people to know about him, Juteau just smiled slyly and said, “Oh there’s a lot of stuff.” 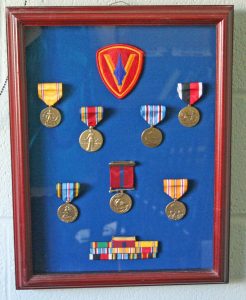 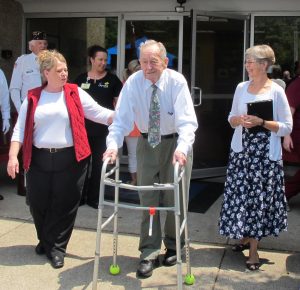 Kendra Peek/kendra.peek@amnews.com
Walter Juteau, center, turned 101 at a community birthday party held at the Danville Center for Health and Rehabilitation. Jody Edwards, with the center, left, helped plan the event and said Juteau is like a “second grandfather” to her. His daughter, Victoria Scarborough, right, said he loves the people at the center. 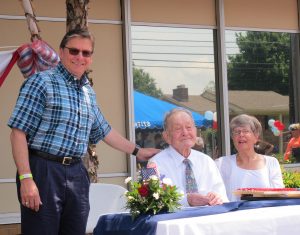 Photo submitted
Walter Juteau, center, turned 101 on Saturday and was given a key to the city of Danville by Mayor Mike Perros, left. Juteau’s daughter Victoria Scarborough is on the right. 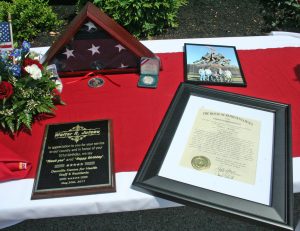 Kendra Peek/kendra.peek@amnews.com
Walter Juteau was given a plaque by the other clients at the Danville Centre for Health and Rehabilitation and a citation by the House of Representatives.