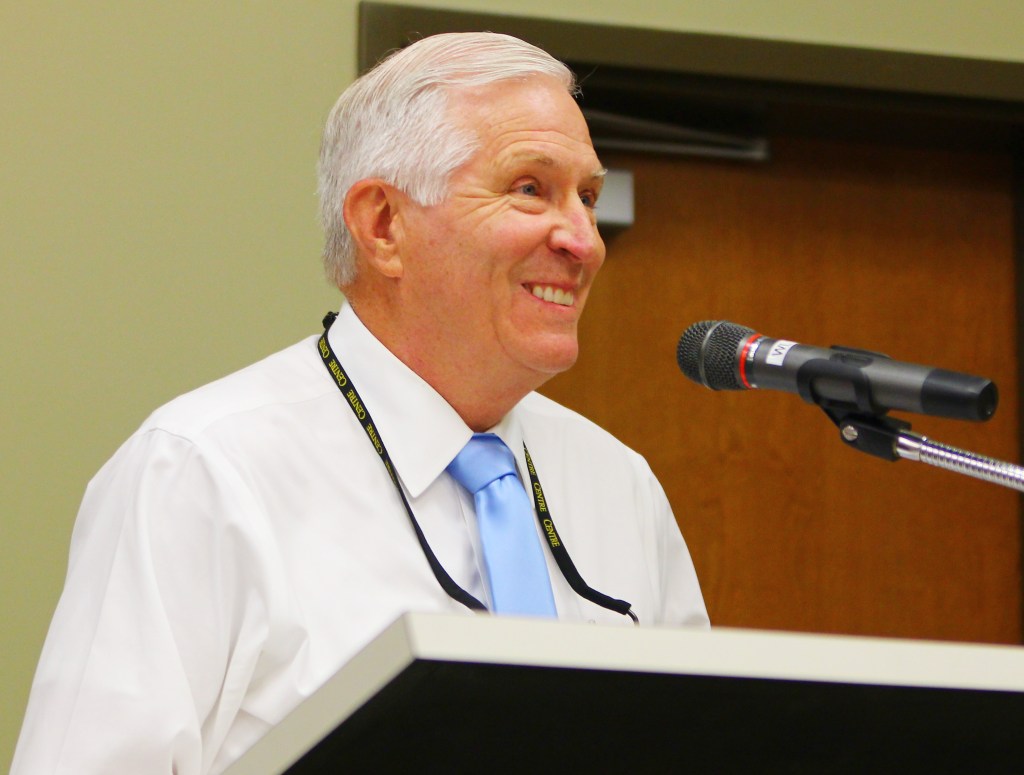 Ben Kleppinger/ben.kleppinger@amnews.com Mark Dexter addresses the Danville City Commission during a “hear the public” agenda item Monday night. Dexter said he feels proposed tax increases are too large and would hurt Danville’s ability to be competitive.

Mark Dexter with Dexter Real Estate spoke on behalf of himself and three other Realtors, objecting to the plan to increase payroll and net profits taxes by half a percent each.

“It’s too dramatic of an increase at the same time,” Dexter said. “It’s a 33-percent increase on payroll taxes, and a 40-percent increase on the net profits tax. There are certainly a lot of worthwhile projects on the list that our able city manager has prepared. The point I’d hope to make is … we are hoping some of the projects can be scaled back or postponed to a later time.”

Dexter said it seems like the tax increases could harm the city’s attempts to bring in business.

“While a great deal of money is being invested in order to attract new industry, it seems counter-productive to enact such large increases at one time,” Dexter wrote in a letter he provided with his comments. “We are indeed competing against other cities. A close competing city is Harrodsburg. Their payroll tax is (1 percent) and net profits tax is (1 percent). Their property taxes are also substantially lower than Danville. Enacting such a large increase makes us even less competitive.”

Cunningham followed after Dexter, telling the sitting commissioners that “I can’t remember a time when I was on the commission that we raised anything in that large a number.”

Cunningham said Danville has a reputation among some of being “anti-business.”

“This kind of a raise in the taxes and the way the city is planning to spend an awful lot of money is not going to help us in this situation,” he said.

Wilma Brown, a resident who has previously questioned the need for some the city’s planned new expenses, spoke again Monday night, telling commissioners she was against the city spending up to $80,000 to hire a historic preservationist.

The city must hire a preservationist or contract for preservationist services if it wants to maintain its current status as a “Certified Local Government,” according to City Manager Ron Scott.

Among the job duties of the proposed preservationist would be helping businesses understand and implement preservation practices; and providing findings of fact to the city’s Architectural Heritage Board (AHB) so the board’s decisions will have the appropriate weight of law.

“In light of the proposed raise in taxes and other needs we have, I really think if Danville has enough money to hire new staff, to especially instigate a new staff position, that should be in the order of someone in essential services like fire personnel or law enforcement personnel,” she said. “Or if we have an extra $80,000 a year, perhaps it should go to raise the salaries of all of our people.”

Brown said she thinks the AHB and the Boyle Landmark Trust are already doing “an excellent job” of historic preservation.

“At this time, I do not see a need for a staff person to be doing that.”

The public comments preceded Scott’s formal presentation of the 2017-18 proposed budget, which has now had the “preliminary” moniker removed from it.

Scott addressed the issue of tax increases during his presentation, telling commissioners he doesn’t see any way around the increases without cutting services or failing to follow through on capital improvement projects like a new downtown fire station or a bridge replacement along Second Street, which have been needed for years.

The proposed tax increases would fund a long list of new spending items, including nearly half a million in matching funds for two “streetscape” projects that will renovate three blocks of Main Street; replacement of a deteriorating bridge over Second Street that is not rated to support fire trucks; half a million in debt service annually so the city can replace the crumbling downtown fire station and a ladder truck that is more than 25 years old; implementation of 911 “emergency medical dispatch;” and additional funding for paving of city streets to replace a loss of state funding.

Scott said there are other, much smaller sources of revenue the city could look at increasing such as property taxes or insurance premium taxes, but “all fall woefully short of the magnitude of increase that is essential if we’re to address the needs that we’ve identified.”

“I would respectfully urge you to support this budget as proposed, or tell us if you have an alternative what services not to provide,” Scott said. “I think there could be some slight adjustment around the edges, but I think those slight adjustments won’t get you away from the conclusion that you need a major adjustment in order to meet the needs of this community right now and moving forward. I think that’s an inescapable conclusion.”

Scott said he believes the proposed “path of taxation” of raising payroll taxes “would levy the greatest charge against those who commute to our community, utilize our roads and streets and are basically taking advantage of what we have in place here.”

The increase in payroll taxes would mean someone making $35,000 annually in Danville would pay an additional $175 annually, or about $3.36 per weekly paycheck.

“It’s not a disproportionate charge upon them, but it is recognition that they need to contribute to the community that we have here because that’s where the jobs are,” he said. “In my judgment, raising taxes on property, on insurance premiums, would be more harmful to the Realtors in this community, and more harmful upon the ability of our community to continue to attract wealthy retirees to our community. And with regard to business considerations, those are considerations in terms of whether we are competitive or not.”

Read about residents’ defense of funding for Grace Café in tomorrow’s Advocate-Messenger. 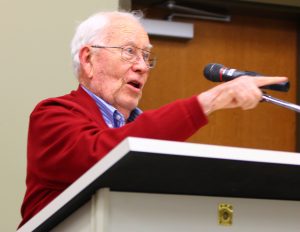 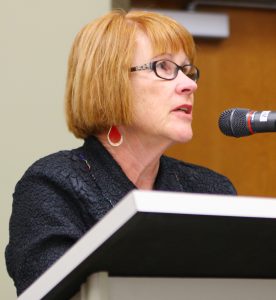 Ben Kleppinger/ben.kleppinger@amnews.com
Chamber of Commerce Director Paula Fowler tells Danville commissioners Monday that the Chamber “has concerns” about the city’s proposed tax increases and “will be reviewing and discussing them.” 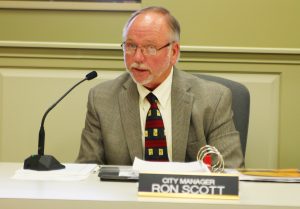