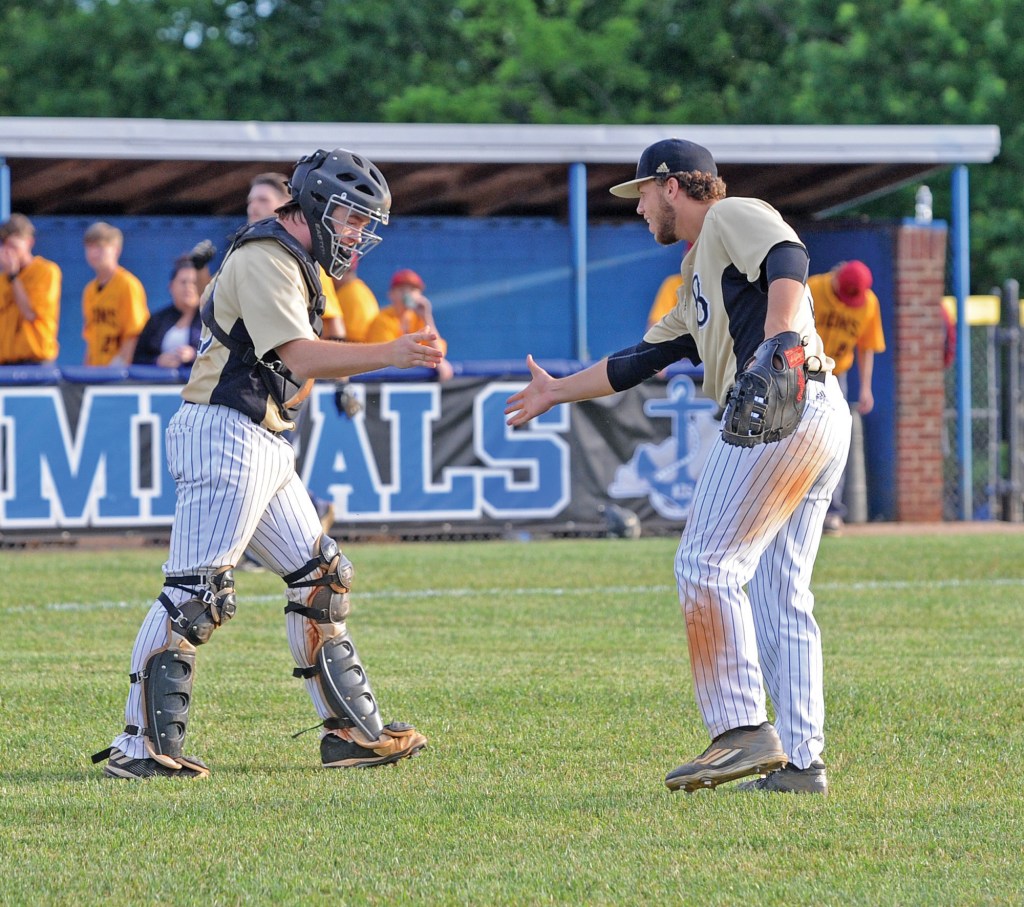 It has been five years since a team repeated as 45th District champions.

Boyle County took its first step to doing just that on Monday, beating Garrard County 6-4 in the district semifinals.

The Rebels won behind another strong start for Sam Tiller, who tossed 6 1/3 innings, giving up four runs (one earned) while striking out 10 batters. He was taken out after reaching the 120 pitch limit.

“Last week, we kind of hit a little speed bump,” Boyle coach Kyle Wynn said. “I talked to them, said it’s nice to play your best baseball at the end of the year, and we had a couple speed bumps last week. We didn’t play bad, we just didn’t play well. I just told them that pitching and defense sets the tone. Especially our pitching tonight, Sam gave it up for 6 1/3, and Drew (Baker) did what he did, come in and throw strikes in relief. Those guys set the tone for us to have a good ballgame.”

The Rebels lost three of four games last week but won when it mattered, beating Garrard for the third time this season.

On the other side of the diamond, Garrard pitcher Branden Pingleton was asked to do more than he’s done all year. But the senior delivered a strong performance, throwing all six innings. He gave up six runs while striking out two.

“He’s been back for a week now, he’s thrown twice,” Garrard coach CJ Lynn said. “He threw 20 pitches his first outing and 40 pitches his second on Thursday. He threw 85 pitches tonight. For somebody to come back and to throw as well as he did, that’s a great accomplishment for him. I think he was anywhere from 85-88 (miles per hour) at one point in the game. To have that velocity and not be able to throw most of the year, that’s something.”

Boyle opened with a three-run first inning and two-run second, taking a 5-1 lead into the fourth. Garrard scored one run in the fourth and two runs in the fifth, cutting the Rebels’ lead to 5-4, but despite three fielding errors, Boyle stayed the course.

“That was probably our only hiccup, I thought we hit the ball well,” Wynn said. “Even when we got out, we hit the ball hard and barreled the ball up. The defense, if we clean it up, they probably don’t score two or three runs, and Sam’s pitch count probably isn’t as high and he’s able to finish the game. But bottom line is (we) did enough to win on defense.”

Pingleton and fellow seniors Mason and Drew Delili — the heart of Garrard’s order — finished a combined 4-for-10 at the plate with two runs and an RBI. They have a special place for coach Lynn, who started coaching at Garrard when they were freshmen.

“Those guys came in as freshmen, they were my first four-year group,” the coach said. “When they were freshmen, they had a long way to go. We ended up with three guys who started for us, and those three left it all out there tonight. There’s no ifs, ands or buts about that, they played hard. A few breaks go our way here and there, we win that ball game. If that ball drops, it’s a tie ballgame.”

Garrard’s record picked up at the end of April, but an injury-plagued season — notably Pingleton, the team’s ace — hurt the Golden Lions down the stretch.

“If we have him early, our record is totally different,” Lynn said. “We ended up 7-20 but we’re not a 7-20 team. Somebody could probably argue with me but I think we’re the best seven-win team in the state. We had a lot of injuries hurt us, especially early, and we started playing well at the end. That’s baseball, that’s life. It’s something we have to fight through.”

Garrard will have the opportunity to rebound quickly next season with a sizable junior class that cut its teeth this season.

“We’ve got eight or nine juniors. We lose two pitchers, and most of those guys in the junior class have pitched at some point,” Lynn said. “We’ve got three pitchers coming back next year that have seen a lot of innings for us. That’s a big plus. A lot of experience that we got this year for the juniors, you’re playing guys your age, that should help us a whole lot.”

The Rebels are scheduled to square off against Lincoln County in the 45th District Championship Wednesday at 6 p.m. at Danville. Weather might change that, and Lincoln County’s graduation is Thursday. But Wynn said he’s excited for his team to have the opportunity to go back-to-back.

“Our goal is always to win region,” Wynn said. “We’ve taken our first step to doing that today. Nobody has had back-to-back district titles in quite a few years, so that’s our goal. We’ll get in a good practice (Tuesday) then Wednesday night, it’s time to go after another district title.”