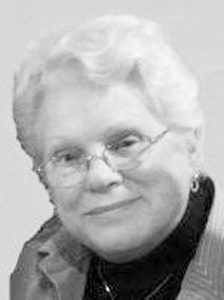 Kathleen Finley, 75, died Sunday, May 21, 2017 at her home. She was born in Syracuse, New York on February 28, 1942 to the late Robert and Patricia Salisbury Bailey. She was a member of Our Savior Lutheran Church in Danville. Kathleen was the oldest of 9 children. She was a former employee with Wal-Mart as Department Manager for 22 years. Kathleen was a volunteer for Centenary United Methodist Church and Boyle County Senior Citizens Center, and was active with Compassionate Friends. In addition to her parents Kathleen was predeceased by a son, Michael Finley.

Memorial Service will be held at 6 p.m., Wednesday, May 24, 2017 at Stith Funeral Home in Danville. Officiated by David Witten. Visitation will be 4 – 6 p.m., Wednesday prior to service. Memorial donations are suggested to Compassionate Friends, Boyle County Public Library, or Boyle County Senior Citizens. An online guestbook is available at www.stithfuneralhome.net.